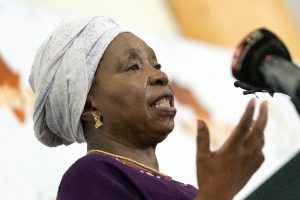 Battle has been raging within the African National Congress (ANC) to succeed current leader and head of state Jacob Zuma.

Dlamini-Zuma, the president’s ex-wife, has maintained good relations with her scandal-hit former husband. She would become the first female leader of the ANC if the wider party endorses her.

The next ANC head will be assured of becoming national president if the ruling party wins parliamentary elections in 2019.

President Zuma is not allowed to run for a third term in office.

“We have found Nkosazana Dlamini-Zuma to be ready to lead the collective leadership of both the African National Congress in 2017, and the Republic in 2019 as the president,” it added.

“We have come to the appreciation that nobody will break that glass ceiling but ourselves as women of the African National Congress.”

Dlamini-Zuma, 67, had already decided not to seek a second mandate at the African Union, a move that sparked rumours that she would attempt to succeed her ex-husband at the ANC.

Her four years at the head of the AU have given her an international profile which has further boosted her status as an ANC heavyweight.

She has already held a string of ministerial posts under South African presidents, including the foreign affairs portfolio.

Among the other hopefuls to succeed Zuma as party head are South Africa’s Deputy President Cyril Ramaphosa and ANC treasurer-general Zweli Mkhize.

President Zuma, who came to power in 2009, has faced growing calls to resign over multiple graft scandals and the country’s poor economic performance, with unemployment at a 13-year high.

The ANC has held power in South Africa since the end of the apartheid era in 1994.