Justices Ore and Kioko of the African Court on Human and Peoples’ Rights reflect on the challenges facing the court. 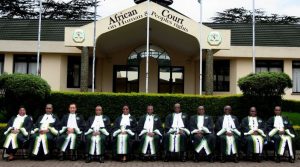 The African Court on Human and Peoples’ Rights is a tribunal established to ensure the protection of human rights across the continent.

The court recently celebrated its 10th anniversary – a decade that has been filled with challenges. It was originally set up in Addis Ababa, Ethiopia, in November 2006, but, in August 2007, its headquarters moved to Arusha, Tanzania.

Out of the 54 member states of the African Union, only 30 recognise the court. And an even fewer, seven member states, allow NGOs and individuals to file cases. But perhaps, the biggest challenge is that most Africans don’t seem to know the court even exists.

So, has it failed? What has the court accomplished so far? And how will it move forward to guarantee human rights are protected across Africa?

To find out, we sit down with the president and vice president of the African Court on Human and Peoples’ Rights, Justice Sylvain Ore and Justice Ben Kioko, as they talk to Al Jazeera.

Asked about the effectiveness of the court and whether there was any concrete evidence as to what it has achieved for member states, Justice Sylvain Ore believes one of the biggest accomplishments of the court thus far is in favour of freedom of speech.

He specifically mentions Norbert Zongo, a Burkinabe investigative journalist who was murdered in Burkina Faso, then ruled by a military regime in 1998. It has been 18 years since his death and the case remains unsolved, but in 2015, after an appeal by Zongo’s family, the court ordered the government reopen the investigation.

“Fortunately, Burkina Faso has complied with the order we made … with regards to the investigation, it is still ongoing,” says Justice Ore.

We ask Justice Ore about one of the longest ongoing human rights violations in African history, Darfur, and what is being done in regards to Sudanese president Omar al-Bashir. Al-Bashir is the first sitting head of state wanted by the International Criminal Court (ICC). He’s been charged with genocide, war crimes and crimes against humanity committed in Darfur. He visited South Africa, a signatory to the ICC, in June 2015, but the government ignored the court’s arrest warrant and allowed him to leave the country. It was widely seen as a public display of disrespect for the ICC.

“It’s a political decision of the South African state. I cannot really have an opinion on this because I do not know the circumstances that lead the South Africans to comply with the request of the ICC,” says Ore.

How, in actuality, can the court do its job effectively, if it is ultimately at the mercy of member states giving up political power in relation to cases, such as Omar al-Bashir’s?

“Our mandate is not different from the European court on human rights. We do not have a force, like a police force, who oblige the states to comply. But I think that responsible states, with the vision to respect human rights, are the states that will comply with the decision of the international court,” Ore says.

When it comes to enforcing necessary decisions and rulings, Justice Ben Kioko echoes Ore’s comments, stating that without member states compliance, nothing can be done.