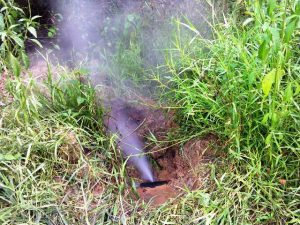 A campaign against crude oil theft mounted this year by The Shell Petroleum Development Company of Nigeria Ltd (SPDC) has highlighted the dangers of crude oil theft and sabotage of pipelines to more than 40 communities in the four local government areas in Ogoni land – Khana, Gokana, Tai and Eleme.

“This public service campaign is a clarion call to people involved in crude theft in the Niger Delta, not only in Ogoni land, to stop destroying their land and heritage through pipeline vandalism,” said Osagie Okunbor, SPDC Managing Director and Country Chair, Shell Companies in Nigeria.

SPDC has reached nearly 150 community units in Ogoni land since it commenced the targeted campaign in 2014, in response to the UNEP Report on oil pollution in the area which recommended public sensitisation on the environmental devastation from pipeline vandalism and illegal crude oil refining.

The grassroots campaign is implemented in partnership with officials of the Rivers State Government, the National Oil Spill Detection and Remediation Agency, NOSDRA, and community leaders who engage chiefs and elders, youth and women groups as well as opinion and religious leaders among many others. The programme involves open-air meetings which are preceded by publicity campaigns on the electronic media.

“The central message of the campaign is that the criminal act of crude oil theft threatens present and future generations,” said Vincent Nwabueze, Manager of SPDC’s Ogoni Restoration Project.

“The 2016 campaign which held between June and October was very successful. Working with an Ogoni-based NGO, we recorded impressive turnout in all the campaign centres with many community people agreeing with the theme of “danger for all and benefit for a few” that crude oil theft represents. In a visible demonstration of government support, the Rivers State Commissioner for Chieftaincy and Community Affairs personally led one of the campaign sessions. We are grateful for the support of the Government and the communities, and hope that people will take the messages to heart and stop exposing lives and the environment to danger through crude oil theft activities.”

In addition to the campaign against crude oil theft, SPDC commenced a separate LiveWIRE programme for Ogoni land in 2014 with the objective of providing alternative means of livelihood for youth in the area. The pioneer set of 105 beneficiaries graduated in February 2015, and more than 70 per cent of them are now successful business owners and employers of labour.