By Paul Adepoju and Yemisi Adegoke* 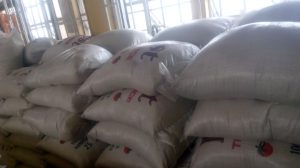 On Tuesday, the Nigerian Custom Service said it intercepted 102 bags of a brand called Best Tomato Rice after the recipient of a gift of rice alerted authorities. The health ministry released a statement on Friday urging Nigerians to remain calm after preliminary findings found no evidence that the rice was plastic or consisted of toxic chemical substances. Yet, the country’s National Agency for Food Drug Administration Control has not released their investigative report.
The health minister’s statement contradicts earlier reports from customs officials.
Mamudu Haruna, comptroller of the Federal Operations Unit, called it “plastic” rice at a press briefing in Lagos Thursday. “We have done the preliminary analysis on the plastic rice. After boiling, it was sticky and only God knows what would have happened if people consumed it.”
Haruna described the importers of the fake rice as “economy saboteurs” seeking to capitalize off of Nigerians looking for bargains during the Christmas and New Year holiday season.
It is unclear where the shipment of rice originated. “A consultant said he was given 221 bags to distribute,” Jerry Attah, the public relations officer for the assistant superintendent of customs, told CNN.
One customer who avoided a potential mishap was Kikelomo Adediti. She said she bought 10 cups of the product (about 2 kg) from a small retailer in the Ikeja area of Lagos, in November.
“It looked perfectly normal and cost less [than regular rice] so I thought I got a great deal. Normally it would take about 20 minutes [to cook] but after 30 minutes it was still hard. I added more water and the aroma was chemical in nature so I decided to discard it thinking it had expired,” she told CNN. Adediti didn’t formally report the incident.
In another case, a woman who received rice as a gift noticed something was wrong after cooking it. Her husband then called customs officials.

Plastic, resin or none of the above

Yet, it’s still unclear what the rice is made of.
“If you look at it it’s rice. If you look at the pictures it’s rice. If you cook it and eat it it’s rice. It’s only when you touch it you’ll feel it that you realize it’s not,” Attah told CNN.
“That’s why I call it fake rice, not plastic rice. To me it’s more like flour coated in maybe rubber… I don’t know the kind of formulations or chemicals they use,” he said.
Attah said that a total of 221 bags — each weighing 25 kilos — came into Nigeria, but only 102 were recovered, which means 119 have already been distributed.

Rice is a major staple food in Nigeria and a favorite holiday meal, often prepared as jollof rice.
It is estimated that Nigerians consume 6 million metric tons of rice per year; in 2013, former minister of agriculture, Dr. Akinwumi Adesina, said the country spends more than $1 billion annually to import rice.
“Though rice contribute a significant proportion of the food requirements of the [Nigerian] population, production capacity is far below the national requirements. In order to meet the increasing demand, Nigeria has had to resort to importation of milled rice to bridge the gap between domestic demand and supply,” according to Professor Tunji Akande, author of An overview of the Nigerian Rice Economy.

With imports adversely affected by the country’s foreign exchange woes and the continued rise of the dollar against Nigeria’s currency the Naira, the cost of rice has more than doubled.
Bags of rice were on sale for NGN22,000 in Bodija market Ibadan and other major Nigerian markets on Thursday, compared with about NGN10,000 a year ago.
The desire for cheaper rice makes Nigerians vulnerable to counterfeit foods industry: “Rice is very expensive and people are looking for where to get it at cheaper rates. If a regular bag costs NGN17,000 but the plastic one is being sold for 9,000, many Nigerian families will buy it,” said economics expert Lanre Adigun.
“This is further aided by the porous nature of Nigeria’s borders. Since the Nigerian government had already banned rice importation into the country through the land borders, the commodity is still being smuggled into the country through the border with Benin Republic. You can go to any market and you will see all sorts of rice imported through the land borders,” said Feyikemi Oladokun, a nutrition expert who works with the agriculture ministry in Kwara state.

In 2011, a Korean news report revealed some fake rice is produced from potatoes that are shaped as rice with the addition of industrial resin. Even when cooked, the report said the rice remained hard.
Dr. Victoria Feyikemi of Babcock University Hospital Ogun state, Nigeria, said the medical consequences of consuming such products can be severe because the fake rice has synthetic resin that is harmful to the body.
“When you eat three bowls of this rice, you are basically ingesting one vinyl bag and the toxicity and associated pathologies are numerous. We cannot afford to add plastic rice-associated medical emergencies to our numerous health challenges in Nigeria, remember we are still struggling with Lassa fever,” she said.
*CNN
0