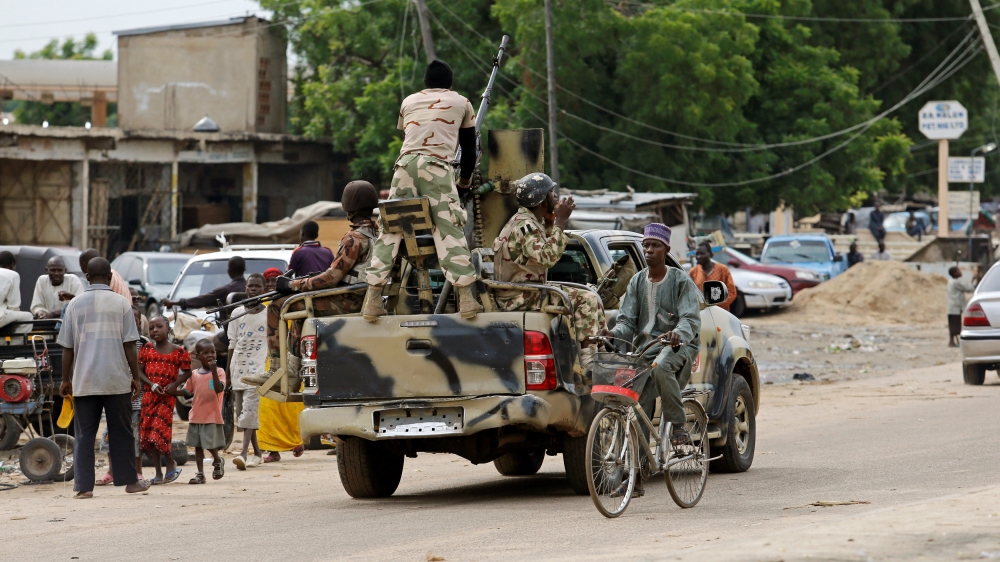 In northern Borno state, the epicentre of a conflict that has spread to three neighbouring countries – Chad, Cameroon and Niger – Nigeria’s army has unleashed a barrage of air and land assaults.

The counterinsurgency has clawed back some territory, but Boko Haram has responded by stepping up guerrilla tactics, ambushing troops and attacking civilians.

In late November, Major General Leo Irbor hailed his men’s success in freeing “more than 5,200 people” in a month.

Villagers under siege are typically forced to abandon their crops, devastating local food supplies. Those who escape Boko Haram are generally transported by the army to camps where basic supplies are also desperately scarce.

The UN estimates that 14 million people will need outside help in 2017, particularly in Borno State, after seven years of conflict that has killed at least 20,000 people and left 2.6 million homeless.

The scale of humanitarian suffering has become more apparent as troops recapture and discover the “scorched-earth” conditions of villages that have fallen to the hands of Boko Haram.

But some local people complain that there are not enough security forces deployed to battle the group.

The same day as Irbor made his comments, five people were killed in raids on villages near Chibok, the district that gained notoriety for the Boko Haram kidnapping of more than 200 schoolgirls in 2014.

The Boko Haram raiders looted and burned houses, set fire to crops that were ready for harvesting, and killed the locals – even though the army had been alerted to the assault.

“We’ve heard there are 700 soldiers to secure the zone bordering the Sambisa forest that is the Boko Haram stronghold,” said Ayuba Alamson, a resident of Chibok.

The forest covers an area of about 1,300 square kilometres (500 square miles).

“We need another battalion,” said Alamson.

Though Boko Haram has been weakened and casualty numbers followings its attacks are often low, the frequency of their strikes “enable it to keep up the pressure on security forces and force them to deploy”, said Omar Mahmood, a researcher at the Institute for Security Studies, stretching them further.

Troop numbers are also being pulled away to fight on another front in the south where fighters have been sabotaging oil pipelines and other installations vital to the country’s export earnings in a fierce dispute over local autonomy and the distribution of petrodollars.

The number of killings in the northeast, which increases after the end of the rainy season each year, is a particular cause for concern – especially on the border with Niger.

Territory in Niger has become the stronghold of Abu Musab al-Barnawi, who was declared a local leader by the Islamic State of Iraq and the Levant (ISIL, also known as ISIS) armed group after Boko Haram declared allegiance to them.

As a result, their “effectiveness for supplying [fighters] with weapons and logistic material has greatly improved over several weeks,” he told the AFP news agency.

While ISIL and Boko Haram fighters battle the Nigerian army, hunger is spreading among both villagers and the swelling ranks of displaced people in the ravaged northeast.

The UN has warned that 75,000 children in the region are at risk of death within “a few months”.

What the World Food Programme has called “famine-like” conditions have prompted experts to warn against seeking victory over the armed groups at all costs.

“The Nigerian army, which has adopted a purely military strategy for seven years, needs to change its approach if it wants to win this war,” said St-Pierre.