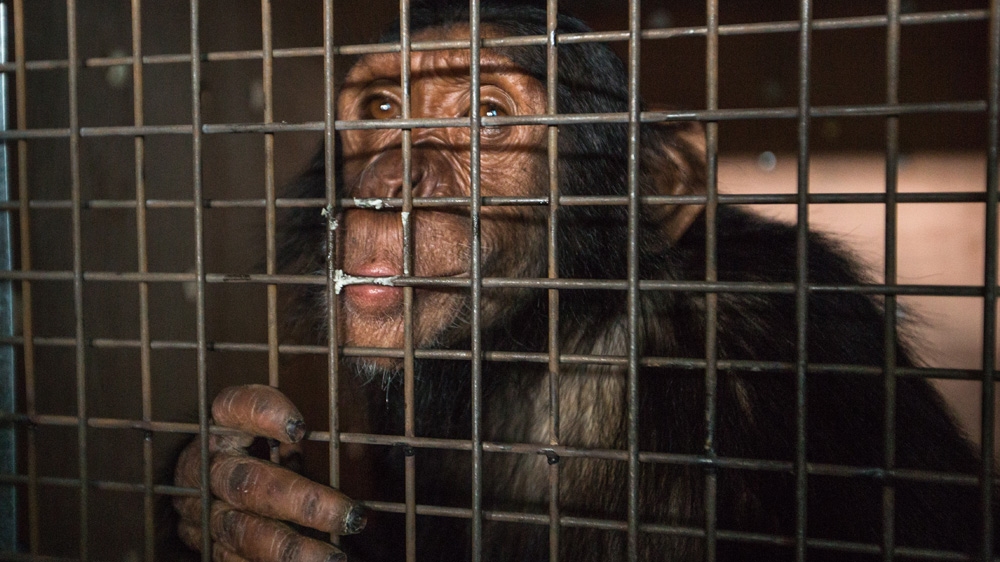 Four-year-old Manno has had a gruelling start to life; wrenched from his mother as a baby, he was trafficked by profit-hungry organised criminals across continents, and has survived at least two war zones.

Since 2013, the young chimpanzee had been resident at a private zoo in Dohuk, in the Kurdish region of northern Iraq, just 70 kilometres from war-riven Mosul, surviving on a diet of fruit, caffeinated drinks and even the occasional cigarette.

But on Wednesday, the illegally trafficked chimpanzee, whose caretakers estimate is four years old in the absence of any documentation, arrived at Nairobi‘s Jomo Kenyatta International Airport on an Emirates cargo plane after an almost 24-hour trip that departed from Erbil.

Manno is now in quarantine where he will spend up 90 days, which may be shortened if he passes the health tests.

His arrival at the Ol Pejeta Conservancy‘s Sweetwaters Chimpanzee Sanctuary in Nanyuki, three hours from Nairobi, marks a multi-country culmination of almost three years‘ work that reached the highest levels of government in the Kurdish region.

“I‘ve been working on this on a daily or weekly basis since the beginning of the year. I‘m writing my final ‘thank you’ email now, so I’m considering my work done,” a tired Jason Mier, the executive director of Animals Lebanon, told Al Jazeera.

Mier was probably the first animal rights advocate to learn of Manno‘s existence. Locals reached out to the Beirut-based American in December 2013, shortly after the chimp arrived at the zoo after being smuggled through neighbouring Syria. The following February, Mier went to Dohuk with the backing of the United Nations‘ Great Apes Survival Partnership, set up to protect the four species of great ape – some of which experts estimate could become extinct in as few as 50 years, if nothing is done.

Mier got initial approval from the ministry of Agriculture to remove the chimp, whose origins are somewhere in Central Africa, but the process quickly stalled.

“[It] was very difficult to get the support we needed and that trip actually failed, and then with ISIS [Islamic State of Iraq and the Levant, also known as ISIL], it became a lot more difficult to get any attention.“

Mier says efforts seemed to flounder with local officials, who may have had a connection to the private zoo owner, a “polite man“ with little knowledge of chimp care or regard for international animal trafficking laws.

Enter Canadian high school teacher Spencer Sekyer, who did a volunteer stint in Dohuk in 2013. Sekyer says he had a spare morning each week and decided to work at the zoo. Through some misunderstanding, the zoo thought he was a vet and gave him charge of Manno, he says, where the pair became close. But Sekyer says he could see the writing on the wall.

“As chimps get older, they get dangerous. They cared for him the best they could, but it‘s not what a primate needs. They were feeding him candy, chips, fried sunflower seeds, he‘s in a cage this big,“ he said, motioning a width of about 1.5 metres long.

“You just see the future coming.“

In 2015, Sekyer went to a talk by Jane Goodall in Edmonton, Canada, and spoke with the indomitable animal rights campaigner about Manno. Sekyer also reached out to a former American ambassador to Iraq with ties to Iraqi Kurdistan Prime Minister Nechirvan Barzani.

This had helped secure an all-important prime ministerial decree to release Manno last February, while the Jane Goodall Foundation simultaneously reached out to Daniel Stiles, who runs the Project to End Great Ape Slavery, based at the Sweetwaters sanctuary, to see whether it could accommodate Manno.

“Living alone is not a proper place for a chimpanzee. Chimpanzees, if they‘re not in the wild, the second best place is being with a community of chimpanzees in a sanctuary. My project and one of its aims is to try and get chimpanzees out of captivity, especially illegal captivity, and into a sanctuary. It doesn‘t have to be Sweetwaters, but a sanctuary,“ Stiles says.

That the international team of chimpanzee defenders was able to pull off such a cross-border rescue, which involved permits and coordination between Kenya, Kurdistan, Iraq and the United Arab Emirates, is all the more impressive given the instability of the situation in nearby ISIL-controlled Mosul.

“Knowing fighting is happening and that it‘s active, you really don‘t know what is going to happen. [We were] trying to get it done as quickly as possible while you still feel the region is safe enough to operate in,“ says Mier, who visited Manno in Dohuk three times since 2013.

Mier, who has spent about 15 years working with trafficked chimps around the globe, says he does not believe any of the fighting in the area impacted Manno, adding that the zoo always had food supplies to give the young chimp – even if they were nutritionally poor.

The worst psychological distress the chimpanzee would have encountered is living in isolation during his early years. Mier says he probably witnessed his mother get shot, as this is the general way poachers extract baby chimpanzees from their protective mothers.

“In many ways, he‘s a refugee, no different to humans. His family was killed, he lost his home and was moved to a place that wasn‘t his.“

But Mier says he is confident that with the right attention at the 250-acre sanctuary, Manno will recover.

“Yes, he is traumatised, I‘m sure he remembers those … bad things he‘s seen in his life, but that doesn‘t mean he won‘t get over it.“

“I think being young, he has a future in him,” Kariuki says. “It’s very easy to forget he still has a long life after, and if that life is comfortable and less distressing, then we expect good healing.”

The veterinarian says the import of wild animals into the country is a rare occurrence. The Sweetwaters Chimpanzee Sanctuary, which is now home to 38 chimps, with Manno‘s arrival, was established in 1993 in conjunction with KWS and the Jane Goodall Foundation to re-home chimpanzees from a Burundi rescue centre at the outbreak of the civil war there.

“The reason we are doing this is not because we want to take chimps from other countries,” Kariuki says, “but we are doing this in practice of law enforcement and the fact [that] we like to protect and conserve wildlife species.”

Kariuki says the biggest drawback about welcoming Manno is the potential that he may introduce pathogens – with the biggest worry being that the chimp could have been carrying ebola from his original home. However, he was screened and given a clean bill of health several times during relocation, as well as being vaccinated for diseases, like tuberculosis.

A species in decline

The rescue effort has been the final stage in a convoluted trafficking process which originates in Africa and very often ends in the Middle East, Eastern Europe and Asia.

Stiles of the Project to End Great Ape Slavery is a self-styled animal trafficking bounty hunter who is meticulously researching the international web of great ape traffickers. He says chimpanzees are bought for as little as $20 or $50 in the small villages where they are initially captured – a task made easier by the widespread habitat destruction, one of the main factors in the decline of the species.

However, by the time they arrive at their destinations, having passed through several pairs of hands, the final asking price is as high as $15,000 to $20,000. Stiles says they often wind up in private zoos of wealthy sheikhs in the Gulf states or oligarchs in former Soviet countries, usually just as a display of wealth.

Stiles, who formerly worked in Kenya to stop rhino and elephant poaching, says he thinks the danger facing the great ape population is just as critical. As many as 3,000 great apes are lost each year, including the babies that are taken and the adults who are killed during poaching operations.

While law enforcement is a necessary aspect to slow the tide of ape trafficking, Stiles says an important tool is to educate the populations where apes are popular as pets about the dangers to both human safety and biodiversity.

“The local mentality is that animals are there to entertain. That‘s their purpose. They don‘t think about them being there in the wild.“

Leading in Time of COVID: A True Test of Leadership