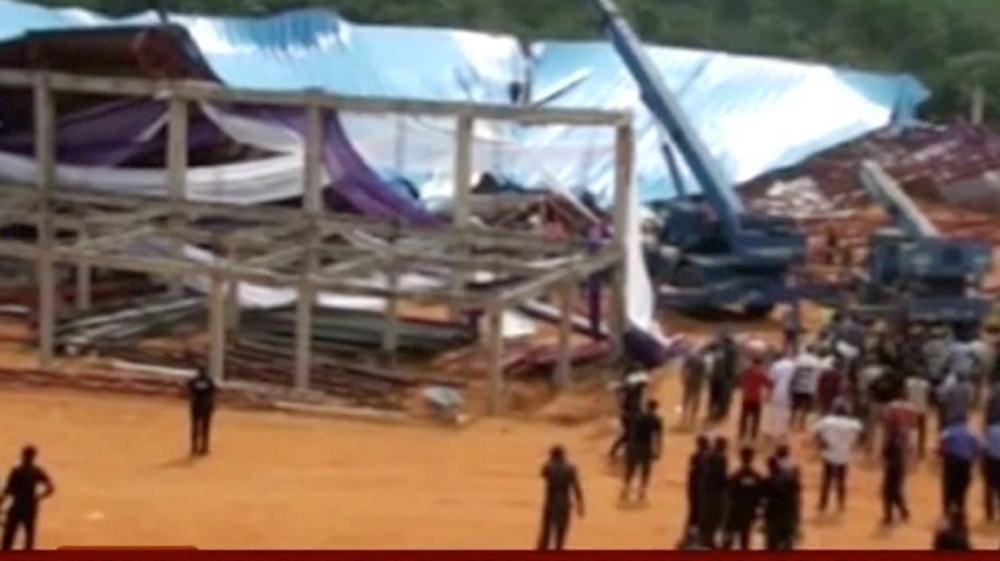 A church roof has collapsed in southeastern Nigeria, killing at least 60 people, with local media reporting the death toll to be much higher.

The evangelical Reigners Bible Ministry in Uyo, the capital of Akwa Ibom state, was packed with worshippers when the roof collapsed on Saturday.

“It is a massive church and the local bishop was being ordained at the service, so there were thousands of people, including top government officials there,” Al Jazeera’s Ahmed Idris, reporting from Abuja, said on Sunday.

“Few minutes after the start of the service the roof started caving in and suddenly, it collapsed, leaving several people dead.”

Our correspondent added that there had been some construction work taking place at the church before the service.

Bodies of at least 60 victims have been retrieved, according to a rescue official who spoke to the AP news agency on condition of anonymity.

Governor Udom Emmanuel was reported to be inside when metal girders crashed onto worshippers and the corrugated iron roof caved in. He did not suffer any injuries in the incident.

“We have never had such a shocking incident in the history of our dear state,” Emmanuel said on his Facebook page.

The governor’s spokesman, Ekerete Udoh, said the state government will hold an inquiry to investigate if anyone compromised building standards.

President Muhammadu Buhari expressed his condolences “over the many deaths and injury recorded following the incident,” presidential spokesman Garba Shehu said in a statement.

While the government insisted that 60 people had died, local media reported much higher death tolls, some 100, and some more than 160.

The state-run Nigerian News Agency said “between 50 and 200” people could have been killed, adding that a rescue operation was under way.

In September 2014, 115 people including 84 South Africans, were killed in Lagos in the collapse of a church belonging to the famous televangelist TB Joshua.

“People are frustrated, this is one collapse too many,” said our correspondent.

“Since the collapse in 2014, we have already seen dozens of buildings collapse in various parts of Nigeria and this is because sometimes it takes a few hundred dollars for some officials to look the other way while contractors do whatever they please.”

Black Gold in the Congo: Threat to Stability or Development Opportunity?