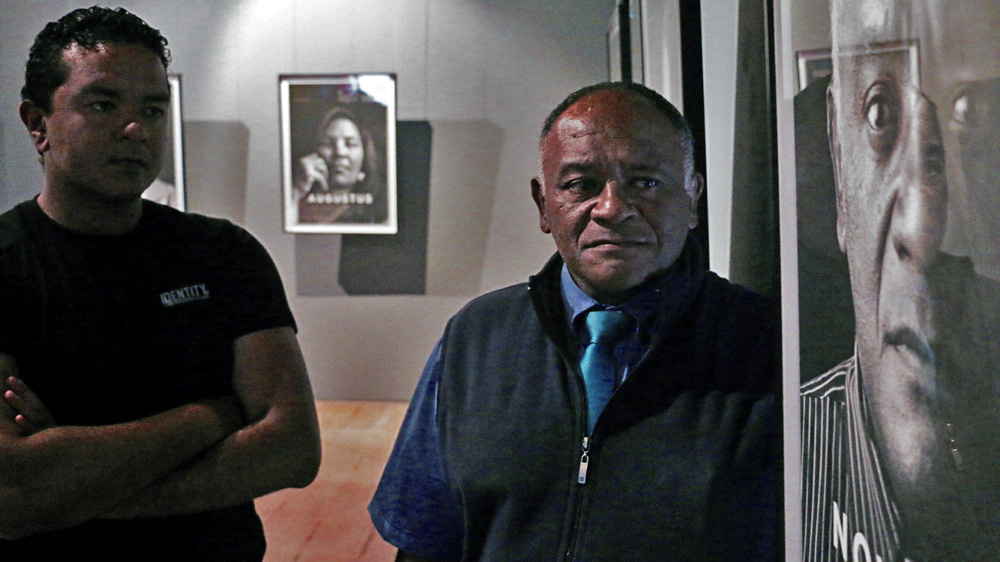 He was given a new name: Zyzer November. November indicated the month of his arrival. All other slaves were named in a similar manner.

The name was passed down through the generations to Ruben, one of the 12 faces portrayed in a calendar and exhibition currently showing at the Izikio Slave Lodge Museum, in Cape Town, “My Naam is Februarie: Identities Rooted in Slavery”.

“This speaks for the voiceless. They should make this a living museum, where the descendants could speak and tell stories of our ancestors,” said 57-year-old Ruben proudly, his son Stephan November at his side.

The two of them attended the opening of the exhibition along with the 11 other descendants of slaves who were featured in the calendar.

One of the descendants had his picture taken for the first time for the exhibition. “My family is not one that takes pictures,” Alfred May told Al Jazeera. He doesn’t know much about his family and its past, he explained. “It was not something we ever talked about.”

Like Alfred, some of the descendants of slaves knew of their family’s history, but never discussed it. Others portrayed in the exhibition, such as John January, Margaret Julie and Cecilia Augustus, didn’t even know that they were descended from slaves.

But Ruben November did, and he is proud of his family’s history.

In 1843, after slavery was officially abolished in the Cape Colony by the British Empire, Ruben’s ancestors were freed, and Zyzer November and his wife, Ruben’s great-great grandmother, who had been brought over from Indonesia to be enslaved by Capetonian slave merchants, obtained land in Pniel, a rural town outside Cape Town.

Another 98 people also relocated to the town, and today Ruben and his children still live here. Ruben teaches woodwork at the local primary school, which will celebrate its 175th anniversary in 2018. He took over the job from his father, as his father took over from his.

“I think what our ancestors’ story can teach us is how a community must stay strong together, especially in the most trying times,” said Ruben.

Ruben imagines his ancestors as strong, proud, and fighting for a better life. The exhibition shows that between 1653 and 1856, 71,000 slaves were brought to Cape Town.

Zyzer November and his future wife may have met at the Iziko Slave Lodge, which is hosting the exhibit. The lodge housed 9,000 slaves in Cape Town, from its foundation in 1679 by the Dutch East India Company, to the time it became government offices in 1810. Before becoming the museum that is open today, in 1966, the Iziko Slave Lodge became a centre of government and justice in South Africa.

When Dutch colonialists like Johan Anthoniszoon “Jan” van Riebeeck , the Dutch colonial administrator and coloniser of Cape Town, arrived in South Africa, they used slaves to do the hardest and dirtiest work, say historians.

Under Riebeeck’s leadership, slaves were imported from colonies in Indonesia and Madagascar to fill a labour shortage left by what the Dutch slavers described as the “uncooperative” nature of the local Khoisan groups, who refused to be subjugated and went on to lead numerous uprisings against the colonial powers.

Although slavery was abolished in South Africa in 1834, when the Slavery Abolition Bill was passed by the British House of Commons and House of Lords, the slaves of the Cape were some of the last to be freed, as the region was one of the last under Commonwealth rule to enact the bill.

A four-year transition period followed the enactment of abolition, during which time the former slaves learned trades.

Gavin Wood, the man who initiated the exhibition and calendar project, says he didn’t know the story of the slaves and their names before his visit to the museum, where he learned about South Africa’s history of slavery.

“I never knew about this story before that visit, but that’s when I knew I had to tell the story of these people, it’s an important and relevant story to tell. A story of hope,” he explained.

Chie executive of the Iziko Slave Lodge, Rooksana Omar, says “the purpose of the exhibition is not to showcase ‘The History of Slavery’ in South Africa, but to continue to drive awareness about a tragic part of our history that is all but forgotten. This exhibition aims to bring these shared histories back into our collective consciousness.”

Former human rights advocate, co-author of the South Africa constitution, and anti-apartheid icon, Albie Sachs attended the opening of the exhibition. Sachs’ wife Bridget is a descendant of slaves and bears the name September, as does his son, Oliver Lukutandu September Sachs, who was unable to attend because of his university studies. “I wish my son was here today, because he would be so proud of his name,” Albie Sachs told Al Jazeera.

“They weren’t just slaves, they were freedom fighters,” Sachs told visitors during a speech at the opening of the exhibition.

Like Ruben, Sachs believes South Africans, and the rest of the world, must acknowledge the stories and contributions of slaves. “Our history lies in the faces and names of these people. We must not reduce them to objects, they brought cuisine, language, a lot of inner life, to the culture,” he said.

“It can make us understand who we are today. When they suffered, they had vitality,” Sachs said.

Ruben November and his son Stephan can trace their great-great grandfather Zyzer to the island of Madagascar, off Africa’s eastern coastline. That is where the family tree starts, but for Ruben, it is also where the trail ends. “I can’t go back to Madagascar and find their names, because I don’t know what they were called before,” he said.

But while Ruben is proud of his name, not all members of his family feel the same.

“My uncle changed his name, I don’t know why, maybe he is ashamed,” Ruben pondered.

But Ruben thinks the exhibition is important as it highlights an issue not taught or talked about in South Africa. “It’s important to present, and represent the people who were stripped of humanity. It’s relevant today, because it is a reminder of human rights,” he said.

Ruben and his son explained how the slaves played a role in shaping the society they live in today. “It’s important to know where we are going, but even more so to learn where you come from.”

While Ruben does not yet have grandchildren, he is already excited about taking them to the exhibition. “It’s important that they know where they come from,” Ruben said. Stephan agrees. “It’s a monumental thing to be here. And it is a privilege.”