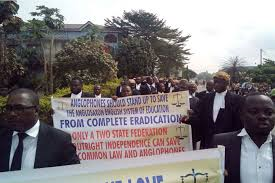 Authorities in Cameroon must investigate the use of excessive and unnecessary force that led to the deaths of between two and four people during a protest in the north western city of Bamenda yesterday, Amnesty International said today.

Eye witnesses recounted that security forces fired live rounds and teargas in reaction to people throwing stones, describing how they saw the bodies of two men who had been shot dead. Media reports quoting police sources have reported that at least four people were killed.

Security forces were also seen launching teargas into an area apparently unrelated to the protests, as well as firing live ammunition in the air.

“Authorities in Cameroon must shed light on the circumstances of these killings and injuries by immediately conducting thorough, impartial and effective investigations. Those reasonably suspected of criminal responsibility for these deaths must be brought to justice,” said Ilaria Allegrozzi, Amnesty International’s Central Africa Researcher.

“We call on the Cameroonian authorities to refrain from the use of unlawful force in its response to the protests. Responding to incidents of violence during protests with unnecessary or excessive force threatens to further enflame an already tense situation and could put more lives at risk.”

On the morning of 8 December protests were held in Bamenda with the aim of blocking a ruling party meeting. This was part of a continuation of demonstrations that began in late October 2016 in several cities in English-speaking south-west and north-west Cameroon against the use of French in courts and schools. 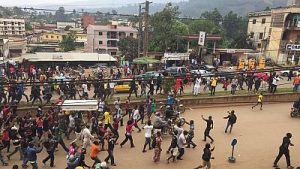 According to information received by Amnesty International, in various neighbourhoods of Bamenda security forces attempted to prevent the gatherings and used tear gas and water-canon to disperse protesters. At about 10.30 am the police barricaded the entrance to the commercial avenue where people were gathering. A police station was burnt by protesters yesterday afternoon, reportedly between 3 and 5 pm.

“Market sellers were sitting at the main gate leading to the market when the police came and decided to break windscreen and put down bikes parked there and firing teargas”.

“Sellers were saying: we don’t know what we have done wrong, we are just selling at the market. When police fired tear gas, sellers and bystanders ran into the market and locked the main gate and you could see all the smoke and vapours

Lawyers, students and teachers have been on strike for weeks, in opposition to what they view as the marginalization of the Anglophone minority.

In the past month Cameroon’s security forces have arbitrarily arrested peaceful protesters and have used excessive force to disperse gatherings in Bamenda and Buea, leading to several injured and at least one civilian dead. On 26 November more than 100 people were arrested in Bamenda.

Amnesty International has so far confirmed two deaths from the incident at Bamenda, but media reports quoting police sources have put the death toll at four.