The United States circulated the three names to the 15-member council in an annex, seen by Reuters, to a draft resolution that would place an arms embargo on the world’s newest nation amid warnings by a senior U.N. official of possible genocide.

If designated by the council, the men would be subjected to a global asset freeze and travel ban.

However, Russia and China, members with council veto powers, have both voiced opposition to an arms embargo and further targeted sanctions. Deputy Russian U.N. Ambassador Petr Iliichev said on Thursday that sanctions against South Sudanese leaders would “be the height of irresponsibility now.”

Political rivalry between South Sudan’s President Salva Kiir, an ethnic Dinka, and his former deputy Machar, a Nuer, led to civil war in 2013 that has often followed ethnic lines. The pair signed a shaky peace deal last year, but fighting has continued and Machar fled the country in July.

Machar was in Democratic Republic of Congo, then Sudan and was most recently in South Africa for medical treatment.

The annex to the draft text accused Machar of entering “into alliances with Equatorian rebel groups to work to overthrow the South Sudanese Government” and said “forces allied with Machar have raided villages and abducted civilians and aid workers.”

The Security Council set up a targeted sanctions regime for South Sudan in March 2015 and has so far blacklisted six generals — three from each side of the conflict — by subjecting them to an asset freeze and travel ban.

In September last year, the United States proposed that the Security Council sanction Malong, but Russia, Angola and Venezuela objected.

The annex to the draft resolution on Friday accused Malong of being responsible for efforts to kill Machar and said that the army chief had expanded or extended the conflict in the country by breaching a cessation of hostilities agreement.

It accused Information Minister Makuei of being “involved in planning and coordinating an April 17, 2014, attack on the U.N. compound in the Jonglei State capital of Bor, which killed three U.N. guards and 140 civilians, mostly women and children.”

U.N. peacekeepers have been deployed in South Sudan since 2011, when it gained independence from Sudan. There are some 13,000 U.N. troops and police on the ground. 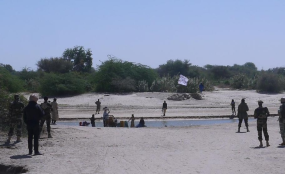