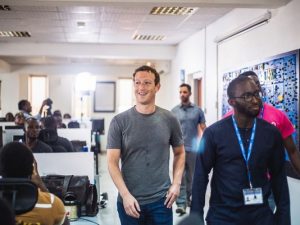 Tech companies founded in the United States are setting up software development centers in Nigeria and Kenya, where a number of young developers has led to growing tech communities.

Andela, which has attracted $24 million of funding from a scheme led by the Chan Zuckerberg Initiative, says it has screened more than 40,000 applicants across Africa over two years and accepted the top 0.7% to work at its bases in Lagos and Nairobi. The developers write code and specialize in frameworks such as Python/Django, iOS and Android and PHP/Laravel.

Andela picked Lagos and Nairobi as bases because of the interest in technology among young people, a buzzing tech sector and the fact English is spoken in both countries. The firm said it intends to announce a third country by the end of the year.

New York-based Christina Sass, who co-founded Andela with Jeremy Johnson, Ian Carnevale and Iyinoluwa Aboyeji  in May 2014, told USA TODAY they wanted the young people to have global exposure but to remain at home to keep talent there — “the obvious answer was software development.”

The ultimate goal is for Andela alumni to lead the spread of technology across the continent, and Andela’s founders expect them to start their own social businesses and to be chief technology officers and product managers.

These coders also could fill what U.S. tech companies say is a shortage of qualified engineers — a claim that’s been contested by some advocates for U.S. tech workers

Jonathan Godfrey, vice president for public policy and public affairs at Washington-based The App Association, which represents more than 5,000 app companies, said there’s a “drastic shortage” of software developers across the United States.

“This is felt in companies large and small and in communities of every size across the country,” he said. “Start-ups find their path to growth are blocked if they cannot hire talented developers. This is a problem of critical importance to the entire tech industry.”

However, some studies suggest there is no shortage in skilled STEM programmers. Hal Salzman, a professor at the John J. Heldrich Center for Workforce Development at Rutgers, said “the supply of graduates is substantially larger than the demand for them in industry” in computer science and engineering, the Los Angeles Times reported.

With Andela scheduled to open another center in Africa soon, more software development is expected in English-speaking parts of the continent.

“We live in a world where talent is evenly distributed, but opportunity is not. Andela’s mission is the close that gap,” said Zuckerberg in a statement.

Innocent Amadi, 24, joined Andela in June this year and has dealt with two projects from inception to completion.

“It’s just amazing,” Amadi, from Imo State in eastern Nigeria, said of his experience. He met Facebook co-founder and CEO Mark Zuckerberg when he visited Andela’s offices in Nigeria this year and told them how he started.

“We see that everything is possible — it depends on what you believe in and what you do,” he said. “It doesn’t matter where you come from.”

In the future, Amadi said he wants to tackle education problems in Africa, giving more people access to education.

Blessing Ebowe, an Andela fellow from Benin City in southern Nigeria, said she didn’t know much about programming when a friend told her about Andela. She applied and joined last year.

“Nigerian developers now understand that the world is watching and are therefore putting more effort, time, hard work and passion into what was on ground before,” she said, adding that it would give Nigerian developers an edge in the worldwide tech industry and increase investment locally.

Seni Sulyman, Andela’s director of operations in Nigeria, said in his vision for Nigeria’s tech future, he expects to see a lot of innovation from “unexpected pockets” in the country.

He said three key challenges the country’s tech industry faces are a lack of affordable infrastructure — especially electricity, Internet and real estate — low access to funds and a dearth of experienced tech entrepreneurs.

“Despite these challenges, Andela is already driving change by connecting local talent into the global technology ecosystem, and we aspire to eventually mobilize hundreds of thousands of developers across Africa,” he said.

He said Zuckerberg’s visit “reinforces not only his support of Andela’s mission, but his belief that indeed the next generation of great technology leaders will come out of Lagos, Nairobi and cities across Africa.”