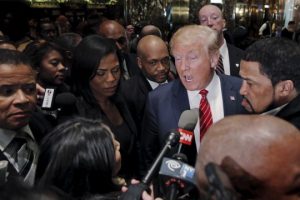 KAMPALA, Uganda — Donald Trump’s presidential campaign has­­ had surprising resonance in parts of Africa where people are weary of the political establishment and see the real estate mogul as a global force for change.

Despite famously pushing an “America first” foreign policy and appearing to show little interest in events outside the U.S., the Republican nominee for president is enjoying a strong amount of popularity in Uganda and other African nations a week out from Election Day.

Trump is also up against Hillary Clinton, a woman known on the international stage for more than two decades, most recently as a globetrotting secretary of State, and whose family foundation has helped to save millions from malaria, HIV/AIDS and other diseases — including many Africans.

Yet for many in and around this capital city, scattered across hills in the jungle of East Africa, Trump’s candidacy represents a strike against political dynasties and the established order that has kept strongmen such as their own president in power for decades. Trump’s tough rhetoric and a fake viral quote have boosted his appeal to many looking for a change.

“Trump has presented himself as a candidate that is anti-establishment, that he wants to turn around things and cause a revolution of some sort,” said Moses Khisa, a lecturer of political science at Northwestern University and columnist for a Ugandan newspaper.

Trump, Khisa said, is tapping into “the same fertile ground of disillusionment and anti-establishment sentiment” on both sides of the Atlantic.

To be sure, support for Trump is not unanimous.

One poll conducted in South Africa and Nigeria, the continent’s two largest economies, showed a marked distaste for Trump. According to the WIN/Gallup International Association poll, released in October, respondents in those two countries overwhelmingly preferred Clinton, 69 percent to 20.

Due to a paucity of polling, it’s difficult to get a full understanding of feelings about the presidential race across the continent. It’s also dangerous to make sweeping generalizations about the political preferences of more than 1.2 billion Africans.

Worldwide, data suggest that Clinton is the overwhelming favorite. A Pew Research Center surveyof countries in Europe and Asia found strong support for Clinton and deep distrust of Trump.

But Trump has certainly struck a chord among a sizable number of Africans, who see him as a rejection of the current system who nonetheless speaks in a recognizable vocabulary.

Last week, five activists here descended on the U.S. embassy to demonstrate in support of Trump, waving misspelled signs and hoping to gather media attention. Two were arrested and later charged with failing to give proper notice about their plans.

“Among the candidates for the presidents of America, he’s the only man who says that once he becomes the president of America, he will fight the dictators — all African dictators including Museveni,” one of the activists, Kizza Hakim, told a local TV station, referring to Uganda’s 72-year-old President Yoweri Museveni. Museveni has been in power since 1986, after helping to topple dictator Idi Amin, and has shown an increasingly autocratic bent in recent years.

Hakim appeared to be referring to a fake Trump quote that has circulated around East Africa, in which he supposedly promised to not “condone any dictatorial tendencies exhibited by dictators around the world, especially the two old men from Zimbabwe and Uganda.”

“[Zimbabwean President Robert] Mugabe and Museveni must be put on notice that their days are numbered and that I am going to arrest them and lock them in prison,” Trump is falsely quoted as saying. “If the past American administrations have failed to stop these two despots, I will personally do it.”

A Trump campaign spokeswoman confirmed that the quote is false.

However, it was nonetheless briefly picked up by media around the continent earlier this year and forced a retort from Museveni. Trump “has got enough work to do in U.S.,” the Ugandan president said, noting rates of American gun violence.

Those who speak highly of Trump in Africa describe the GOP nominee as an outsider willing to speak truth to power.

“Above all, his willingness to disregard political correctness makes the supporters feel he’s saying exactly what they really feel about issues, but they’re afraid to say it in public. In a way, he represents their hopes, fears and frustrations,” Kwaku Adu-Gyamfi, a columnist in Ghana, wroteearlier this year.

“Isn’t he the kind of person we need desperately in Ghanaian politics right now?”

Clinton, meanwhile, is seen by some as part of the political establishment that has helped run the U.S. for the last two decades.

Despite being of Kenyan heritage, President Obama’s legacy in Africa is somewhat mixed, especially when compared to former President George W. Bush’s aggressive efforts to combat HIV/AIDS through the PEPFAR program. Clinton’s association with Obama’s administration hasn’t made her universally adored across Africa.

Trump also embodies many of the “big man” stereotypes that have permeated African cultures.

“For me, as an African, there’s just something familiar about Trump that makes me feel at home,” “Daily Show” host Trevor Noah, a South African native, quipped last October.

Throughout the campaign, Trump has railed on issues of globalization, China’s rising status, political cronyism and depressed economic opportunities. Many of those sentiments hit home in African countries that feel at the mercy of foreign powers, just as they do in parts of Europe that have experienced their own nationalist movements.

“One of the things that perhaps is a little bit of a paradox is that African populations often feel that their countries are slightly exploited by the West, therefore they support leaders domestically that stand up to people,” said Nic Cheeseman, a professor of politics and African studies at the University of Oxford. “And I think they may be looking to see someone like Trump and think that Trump is also trying to do the same thing for his country.”

“When Trump says he’s going to put some of those forces back in the box — even though he’s not talking about Africa, he’s talking about America — I think some of the African audiences hearing that would see a connection to their own battle against globalization, against multinationals,” he added.