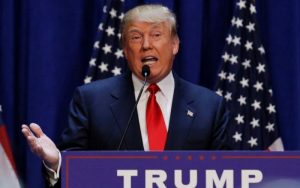 Donald Trump’s ascension to the US Presidency has stunned many across the globe due to his strange views and prejudices. The Conversation Africa business and economy editor Sibonelo Radebe asked Professor Patrick Bond to unpack implications for Africa.

What does a Trump victory mean for Africa?

The most catastrophic long-term consequence is climate change. This is because Trump is a denialist who will give the green light to widespread fracking, coal and oil exploration. Africa will be the most adversely affected continent. United Nations scientists estimate that 9 out of 10 small-scale farmers are unlikely to farm by 2100 due to drying soils and global warming, plus extreme weather will also cause 180 million unnecessary African deaths by then, according to Christian Aid.

Under Trump, we can safely predict that Washington will no longer seek to control United Nations climate negotiations, as did Barack Obama’s administration. The WikiLeaks Clinton emails and State Department cables revealed blatant manipulations of the Copenhagen and Durban climate summits. Instead, Trump will simply pull the US out of the 2015 Paris agreement, as did George W. Bush from the Kyoto Protocol.

By good fortune, the UN Framework Convention on Climate Change annual summit is underway this week in Morocco. The only logical move, if the delegates have any spine, is to expel the US State Department and establish the machinery for a major carbon tax applied to products associated with countries – the US especially – which raise emissions and threaten the survival of many species across the globe.

Trump also heralds a rise in US racism and xenophobia, parallel to the Brexit vote by the British white working class. In neither case will local solutions be effective for the simple reason that neither Trump nor Theresa May (UK Prime Minister) are interested in the income redistribution required to benefit their economies.

And African elites who have – with a few exceptions – climbed over each other to please Washington, won’t find themselves welcome in the White House.

Hopefully the contagion of Trump’s racism – which will make life for Africans much harder – will be met by a major resistance movement including Africans from all walks of life in solidarity with various groups that stand to be oppressed by the US – women, African-Americans, Latinos, Muslims, environmentalists, progressives of all sorts. This movement can shape up in the same spirit to those that gave solidarity during the fight against apartheid.

What are the likely economic consequences?

Consistent with his isolationism, world trade stagnation will continue. In the case of Africa, Trump is likely to retract benefits under the Africa Growth and Opportunity Act and reduce US aid.

That isolationism, in turn, could give Africans a chance to recalibrate what is now an excessive, self-destructive reliance on export of oil and gas, minerals and cash crops. Africa must focus on localising its economies to be able to meet basic needs.

Trump’s hatred of what he terms the “globalists” is probably just hot electioneering rhetoric. It’s fair to predict that pro-corporate candidates will come forward as Trump allies to calm the crashing stock markets.

The “neoliberal” group of policy wonks who expressed disgust with Trump and favoured Hillary Clinton will quickly make inroads into the new administration. They will ensure that the continuing US dominance in Western-leaning multilateral institutions is not disturbed.

We can simply anticipate more brazen US self-interest, as witnessed during the Ronald Reagan and George W. Bush regimes, with less of the confusing rhetoric promoted by Obama and his allies.

What US policies on Africa are likely to change? With what impact?

To be frank, we can only offer guesses. Trump said literally nothing about Africa during his campaign. He wants to “rebuild US military power,” which might include strengthening the Pentagon’s controversial Africa Command, known as Africom.

Economically, it is worth noting Trump’s close relations to the oil and gas industry which comes via Vice President Mike Pence. This suggests that multinational corporations in the extractive industries who desire more explicit imperial support for African adventurism will be served well by Trump’s bully-boy mentality.

What does this mean for multilateral institutions and how will this affect Africa?

The US’s role in the International Monetary Fund (IMF) will become nastier given the veto power it enjoys, holding more than 15% of the voting shares. Trump will probably hire a brutal neoliberal as his IMF executive director, someone who will tighten the screws on Africa using Washington’s veto power. The leaders of two big African economies are desperate for IMF credits: Nigeria ($29 billion) and Egypt ($12 billion).

In relation to the United Nations, an interesting question comes to mind: should the UN leadership now sitting in Trump’s Manhattan East Side neighbourhood not develop a contingency plan to move UN headquarters out of the US? Trump promises to make life very hard for visitors who are Muslims, Libyans, Syrians and Mexicans – amongst others – so holding multilateral events in the US may soon be impossible.

The period ahead demands a very different multilateralism due to a number of expectations. The first is that Trump will sabotage the UN Framework Convention on Climate Change and similar strategies to solve global problems, and wreck nuclear non-proliferation strategies such as the agreement that Obama painstakingly reached with Iran earlier this year.

And the second is that three of the BRICS’ nationalistic leaders – Vladimir Putin in Russia, Nahendra Modi in India and Michel Temer in Brazil – can be expected to establish much closer ties to Trump. This is likely to affect the balance of power between geographical regions, added to which are the drift of Pakistan, Turkey and the Philippines away from Washington. Trump’s hatred of China is another indeterminate factor.

Regardless of the geopolitical maneuvres, it’s time for a ‘multilateralism-from-below’ in which traditional progressive movements in civil society find common cause, because this is the most serious threat to humanity, the world economy and environment we’ve seen in living memory.