The lingering shadow of Ebola outbreak in Sierra Leone 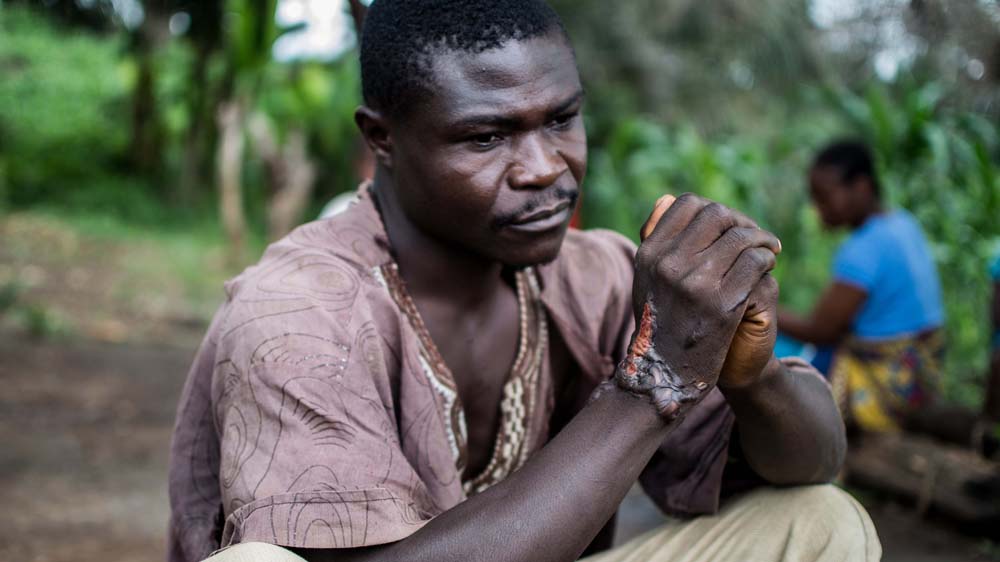 Sierra Leone – Hassan sits silently and stares into the distance, he has tired of brushing his hair and an upright comb is tangled into the back of his curls. The 17-year-old speaks quietly, using few words in a calm and gentle manner, but people in his community are scared of him.

They say he is crazy and fear what he might do next. A few days ago he was seen screaming and dancing on the spot, and not long before that he had dressed in his sister’s clothes. Then, of course, there are the times when he sits alone and talks to himself in incoherent mumbles.

Hassan is just one of many Sierra Leoneans whose mental health suffered as a result of the Ebola virus and without the necessary support it has gradually deteriorated over the past year.

One year ago, President Ernest Bai Koroma solemnly took to the airwaves to announce the end of the Ebola epidemic in Sierra Leone, as confirmed by the World Health Organization.

The disease, which killed more than 3,580 people in 18 months, left behind a legacy of psychological suffering which is little discussed and under-supported. The nation has only 21 mental health nurses and one elderly psychiatrist for a population of more than 6 million.

Had Hassan received any form of psycho-social support he might not have dropped out of school, nor would he be scared to leave the compound around his house.

Before his parents died from Ebola he was a bright and promising young pupil with top grades in business studies and English. After school he would go to play football with his friends in the neighbourhood and then come home to study.

He was particularly close to his mother. When she used to come back from the provinces bearing fruits to trade in town, he would always run at once to hug her. His sister, Isha, laughs at the memory. “Our mother used to bring mangoes and honey for all of us, but Hassan would always rush to her and take his first. She really adored him and he’d joke he was the favourite child and that all the presents were for him”.

It was during a joint trip up-country that his parents both contracted Ebola and came home complaining of a fever, only to die a week later. Soon after this Hassan started to exhibit unusual behaviour.

“I remember coming into the room to find him wearing one of our mother’s necklaces,” says Isha. “He asked me where our parents were and I told him they were dead. He shook his head and said I was lying. He said that he could see our mother standing in front of him”.

The last real glimpse that Hassan and Isha had of their parents was when their corpses were carried out of the house by a burial team. This denied them the chance to have a traditional funeral, something which might have given Hassan a degree of closure.

As Ebola-infected corpses were so contagious, teams of trained burial workers in protective clothing would move from house to house picking up the dead and carrying them off to graveyards.

These teams would often collect up to 15 bodies in a day and the work was emotionally traumatic and physically demanding. Big wages were offered to burial workers to try and compensate them for the difficult nature of their work.

Many of them also bear a heavy psychological burden today.

Former burial worker Patrick, 29, is extremely proud to have played a role in the fight against Ebola, “I did it for my country,” he says.

Yet his patriotism comes at quite some cost. One year on he is still suffering bouts of depression and is regularly haunted by flashbacks.

“The dreams come often,” he says, “I remember that when there were a lot of bodies in the morgue they’d stack them up one by one – like bags of rice. That’s the vision that usually comes to my mind.”

He adds that it happens not only at night, but also in the daytime if something triggers a memory.

“When I’m thinking of that and someone is trying to get my attention I simply can’t hear them”, he says. “After it happens, I won’t eat for the rest of the day.”

During his time as a burial worker he took to drink and drugs to drive away the memories, but at a medical check-up soon after Ebola he was warned that any more toxins in his system could be fatal. Now he only drinks occasionally, when the flashbacks really won’t disappear.

After the outbreak was over Patrick said that he found it very difficult to re-adjust to normal life. He admits that he and other members of the burial team would sometimes turn up at hospital morgues just to look at the dead bodies. “It made us feel like we were still engaged,” he says, adding that he rarely does it any more.

Patrick says that he was lucky to receive psycho-social support from NGOs IsraAid and Concern.

He has now founded a charity of his own, called Protect Sierra Leone, which is made up of ex-Ebola response workers and focuses on sanitation issues.

Burial workers were badly stigmatised, not only for preventing families from carrying out traditional funerals, but because of the money they were making.

Their monthly salaries were six times the minimum wage and people accused them of profiting from Ebola just as others lost their livelihoods. Jobs became particularly scarce in the agricultural sector as quarantine restrictions meant that farmers were unable to sell their produce around the country.

He remembers the frustration he felt during the outbreak.

“I was struggling so much that I could barely take care of myself and my family,” he says. “I really had no money. Then at some point people in my village started receiving help from an NGO, but they told me I wasn’t eligible because no one in my immediate family had contracted Ebola.”

Apparently maddened by jealousy and desperation, Emanuel one day stormed into his village and started attacking a pregnant woman with a stick. Those nearby responded by pinning him to the ground and tying him up with rope.

“They maltreated me beyond belief,” he says. “They tied my legs and hands so tight that it tore my skin.” He stretches out his arms to show the deep scars around his wrists.

Mental health nurse Martin, who was summoned from a town three hours away to deal with the case, remembers it well.

“He was in a terrible state when I arrived, screaming and crying, desperate to break the ropes. I untied him and gave him some medicine, then I stayed all night to keep him calm. After a while he started to talk about his problems, he said Ebola had taken everything.”

After what he did, Emanuel is still treated as an outcast by his village today, and his wounds cause him pain when he’s working in the field.

Martin also believes that his psychological problems are not yet cured and would like to be able to pay Emanuel more visits. “The problems are financial though,” he says. “Emanuel can’t afford to pay me and I can’t afford to keep buying the medicine and petrol on my salary.”

Ebola left its psychological wound on many, not only the people who lost their loved ones, but also members of the response team and those who saw their livelihoods ruined.

But when President Koroma announced his recovery priority plans in June 2016 no mention was made of the nation’s mental health.

While aid money is being set aside for education, energy and medical improvements, very little has reached the under-funded mental health sector.

No real research has been undertaken into the psychological impact of Ebola.

Joshua Duncan, coordinator for the Mental Health Coalition of Sierra Leone, told Al Jazeera: “It is believed that [Ebola virus disease] affected people are now showing signs of post-traumatic stress disorder,” but admits that “up until now there is no data”.

While the Ebola virus ostensibly left Sierra Leone a year ago, much of the population still wear invisible scars that they have little chance of fighting until they receive due support.