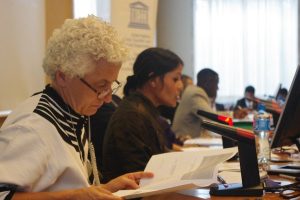 The Southern African Development Community (SADC)   region has  witnessed  the launch of the sunrise campaign  by Genderlinks meant to break the cycle of  Gender Based Violence (GBV) especially against women.

According to Colleen Lowe Morna, Genderlinks CEO, the sunrise campaign is a Genderlinks programme to enhance the economic independence of women who have experienced Gender Based Violence. Morna says that it is an important tool in the struggle against all forms of GBV.

The sunrise campaign has just been launched in Zimbabwe at the just ended SADC   protocol @work summit and awards event held in Harare on 15 to 17 November, 2016. The Harare summit was attended by alliance members and was held under the theme: 50/50 by 2030! Empower women, end violence. According to Tapiwa Zvaraya, Genderlinks  Monitoring & Evaluation Officer , the sunrise campaign was also  launched last week in  Botswana, Lesotho, Mozambique, Zambia, South Africa, Madagascar and Mauritius.

Genderlinks is a regional organisation headquartered in South Africa committed to an inclusive, equal and just society in the public and private space in accordance with the SADC Protocol on Gender and Development.

According to Genderlinks, GBV undermines the agency of women in abusive relationships. The organisation says that economic dependence on abusive partners is the primary reason that women stay in such relationships.

It is reported that the combination of economic vulnerability and abuse often provides few choices for the women. It is said that many stay in the relationships because of perceived financial security provided by the abusive partner.

Under the sunrise campaign, economic justice starts with ensuring that resources and strategies adequately serve women and girls’ needs.

During 2013, Genderlinks piloted a programme called Empower Women: End Violence which involved 1 500 survivors of GBV in 10 countries in the SADC region. It is reported that 100 centres of excellence for gender in local government anchored the project, providing a space to meet, network, access advice, local finance and markets.

According to Genderlinks, the programme demonstrated that GBV can be substantially reduced or overcome through a combination of life skills and economic empowerment. The programme has been called the sunrise campaign because it offers a fresh start to women engaging into it.

“Sun is the most powerful form of light which symbolises hope, the hope of a new day and of sustainable solutions to GBV,” according to Genderlinks.

It is also reported that the five year long programme provides women with the tools to make alternative long term choices and sets out to increase women’s agency and independence. Mentors are selected from both the local council and from existing business men and women within the district, enabling the new entrepreneur to have an accessible advisor to support them over their initial six months business development phase.

According to Genderlinks, the campaign is an evidenced based life and entrepreneurial skills programme for survivors of GBV in southern Africa.

The organisation says that the cost for training and mentoring one survivor of GBV to financial independence is R15 000 or $1000 and is calling for well-wishers from all over the world to support, donate   or sponsor the programme.

Genderlinks aims to offer at least 1000 new women each year in 10 countries in the SADC region the opportunity to gain their financial freedom under the sunrise campaign.

“We kindly ask for donations from the USA, UK and from everywhere to move more women from despair to hope. We are also launching the sunrise campaign in the eve of the launch of the 16 days against GBV on 25 November, 2016 by Genderlinks in the region,” Lowe Morna said at the Harare , summit.