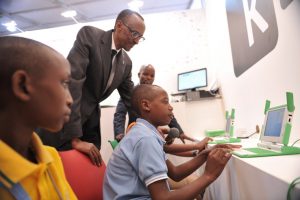 As an audience of local techies and international press looked on, President Paul Kagame sent the inaugural flight from a tablet-controlled launcher at a drone-port in Rwanda’s Muhanga district. The scene stood in stark contrast to media images 22 years ago of Kagame in military fatigues leading the country out of civil war.

Rwanda’s come a long way since the 1990s. Becoming a technology hub is central to the country’s national priorities. And Rwanda’s partnership with a Silicon Valley drone startup shows the potential of African nations to shape ICT policies that catalyze innovation with global applications.

Since launching on October 13th, Zipline’s unmanned aerial vehicles now make 50-150 daily deliveries of critical medical supplies (primarily blood and vaccines) to 21 locations across Rwanda. The small craft lift-off from a customized “drone-nest,” drop their loads by parachute, then return to their base — guided digitally by Zipline’s California navigation system connected to Rwanda’s 3G network.

“It’s the first program of its kind,” said Zipline co-founder Keller Rinaudo. He notes there have been a number of drone delivery demonstrations across the world, but nothing like the Rwanda operation. “We’re operating a commercial service at a national scale, with national regulatory approval and a customer that is paying us to do it on a daily basis.”

Though Zipline’s profile sounds like a social venture, it is a for-profit entity. Rinaudo and his former Harvard classmate Will Hetzler formed the company after identifying a market for delivering essential medical products cheaper and faster, particularly to remote areas and regions with challenged infrastructure.

Rinaudo estimates the value of urgent health logistics in Africa as north of $1 billion. In Rwanda, Zipline is paid per delivery by  the government. The company’s vision is to expand its operations in Rwanda and then across the continent, all at a profit.

Zipline has raised $19 million in venture capital from investors including Sequoia Capital, Google Ventures, Microsoft co-founder Paul Allen, Yahoo co-founder Jerry Yang, and Subtraction Capital. The company tests its drones, which are custom designed by robotics engineers, at a private facility outside of San Francisco.

While Zipline’s eureka moment came to Rinaudo on a trip to Tanzania, a referral by former Economist Africa correspondent and Red Line drone founder Jonathan Ledgard led him to Rwanda.

“He knew Kagame pretty well and relayed Rwanda’s vision for how this technology could make an impact in the country,” said Rinaudo. Upon research and meetings, “we found Rwanda really forward-looking, innovative, and the government was already making big investments in technology and healthcare,” Rinaudo said.

Because of this, “it seemed like a natural place…to launch something new,” according to Rinaudo. The government of Rwanda has supported the development of drone operating systems in the country. In the case of Zipline, it granted land and offered cooperation with its Ministries of Health, Defense, and Civil Aviation Authority. This aligned with the country’s commitment to fostering ICT models to improve the living standards of its people.

Throughout Africa’s shift away from economic disconnection to integration with the global economy and technologic advancement, Rwanda has been a standout.  The country has adopted e-government service initiatives, aggressively courted partnerships with international investors, and significantly reformed its private sector. 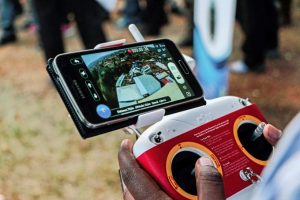 A photo taken on July 24, 2014 shows an aerial view displayed on a mobile phone synchronised to a tele-guided drone camera during an international trade fair in Kigali.
Rwanda is planning to construct a droneport in order to get drones to carry mostly medical urgent supplies from a central hub to rural areas around the country. / AFP / CYRIL NDEGEYA (Photo credit should read CYRIL NDEGEYA/AFP/Getty Images)

Rwanda is now the highest ranked African country on the World Bank’s Ease of Doing Business list — 54th, ahead of countries such as Chile, Luxembourg, and Greece. The government is still chided on democracy and human rights issues (see its suppression of political dissent and Kagame’s possible third term), but it has made undeniable progress in shaping a technology-driven business environment.

“Rwanda is a startup country,” the Minister of Youth and ICT Jean Philbert Nsengimana told TechCrunch. “Our development strategy has been clear from the beginning that ICT would be one of the foundations of our transformation,” he said, referring to the country’s Vision 2020 Program launched President Kagame in 2000. The plan has stated goals of transitioning Rwanda to a “knowledge-based…middle-income country” with “science and technology” as a “cross-cutting influence” to business and government.

Perhaps the most fundamental step toward this end was the establishment of a ministry devoted specifically to IT. With the exception of South Africa and Botswana, governments committing significant resources to ICT is a relatively recent trend in Sub-Saharan Africa. Kenya led the way in 2010 with completion of The East African Marine System (TEAMS) undersea fiber optic cable project.

TEAMS increased East African broadband and led to the establishment of Kenya’s Information and Communication Technology Authority. Both laid the foundation for the IT successes (namely mobile money) that have earned Kenya its Silicon Savannah moniker.

Kenya and Rwanda’s formation of ICT authorities and Africa’s emerging technology movement have prompted other governments, such as Nigeria, Ghana, and Tanzania, to flesh out more defined national technology strategies.

Minister Nsengimana welcomes increased national competition on the continent to foster innovation. He believes it is “the right thing to do for all African countries” noting Rwanda’s desire to be on top.

“We should end up with a constellation, where there are many tech hubs across the region,” he said. “But in any constellation, not all stars have the same brilliance. My job is to make sure that Kigali and Rwanda become the most brilliant, but not by any means the only star in the group.”

Rwanda is posting some shining ICT achievements. The country should soon reach 40 percent internet penetration, up from less than 10 percent three years ago, according to government statistics.

The improvement derives largely from a national investment of over $100 million in a 4,500-kilometer fiber optic network. Rwanda is rolling out its 4G LTE program nationwide and is the highest ranked African country on the Alliance for Affordable Internet’s Affordability Index.

In education, Rwanda’s embraced technology at the primary school and university level through its One Laptop Per Child program and partnership with Carnegie Mellon University, which has created a Kigali campus offering advanced degree programs in computer science and IT.

The list of Rwanda’s ICT initiatives goes on. The country is manufacturing laptops for Argentine hardware maker Positivo BGH through its Kigali Special Economic Zone. It is hosting a tech-driven African Smart Cities Initiative with partner Ericsson.

And next year it will launch the $100 million Rwanda Innovation Fund to invest in early stage tech startups. “Leading on drones is just one example. We’re also looking to lead in other cutting edge technologies such as blockchain and others,” said Minister Nsengimana.

In the case of drone delivery, Rwanda’s progressive ICT stance may have already produced an innovation model with advanced economy impact.

As TechCrunch reported in August, Zipline’s Rwanda program gained the attention of the White House’s UAV initiative, which has tapped the startup to test drone delivery of medical supplies to remote U.S. communities. “We have the U.S. Secretary of Transportation visiting our test facilities next month,” said Zipline CEO Rinaudo. “With what we’ve done in Rwanda just the last month there’s been a big shift in terms of what’s possible, especially in the developed world.”