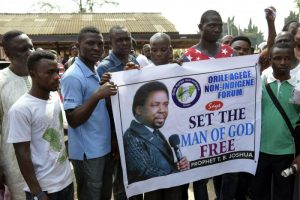 Nigerian preacher T.B. Joshua has sought to explain his unfulfilled prophecy on the U.S. presidential election.

The popular pastor predicted November 6 that the election would be won by “a woman,”presumably Democratic candidate Hillary Clinton. Joshua’s message, posted on his Facebook page, indicated that the new president would face many challenges, including “passing bills” and a possible no confidence vote.

The preacher, whose services often attract tens of thousands of worshippers from Africa, posted an explanatory message Sunday.

“We have seen the outcome of the election in America. Having read, you will notice that it is all about the popular vote, the vote of the majority of Americans,” Joshua said.

The statement seems to be a nod to Clinton’s lead in the so-called popular vote—i.e. the individual votes collected by a candidate, rather than the number of states won under the U.S. electoral college system. The former U.S. Secretary of State is likely to end up with around 2 million more votes than the business mogul, according to The New York Times, once all provisional and absentee ballots are counted.

Joshua also appeared to suggest that his pre-election prophecy had been misinterpreted.

“In this case, we need the spirit of a prophet to recognize or to know a prophet. Our levels are different. We are not on the same level,” he said. “I see many people trying to interpret prophets on the basis of their own minds and ideas. The prophecy seems to cause uproar, to many who gave it different meaning and interpretation.”

After the election result was announced, many Nigerians took to social media to question Joshua’s credentials after his prophecy appeared to be proven false.

Joshua is one of Africa’s most popular preachers, but also one of its most controversial. In September 2014, a guesthouse belonging to his Synagogue Church of All Nations (SCOAN) in the Nigerian city of Lagos collapsed, killing more than 100 people, mostly South Africans who had traveled to Nigeria to hear Joshua preach. Joshua, along with several engineers and SCOAN trustees, is facing charges of criminal negligence for the incident, but his trial has suffered multiple delays. Joshua has rejected accusations that he was criminally responsible.

The preacher claims to predict various world events on a regular basis. He has previously said that he predicted the November 2015 militant attacks in Paris and the death of music legend Michael Jackson.

The Nigerian pastor is also estimated to be one of Africa’s richest preachers. In 2011, Forbes estimated his fortune at between $10-15 million. Joshua supports various charitable initiatives, including the rehabilitation of former militants in the oil-rich Niger Delta region of Nigeria.