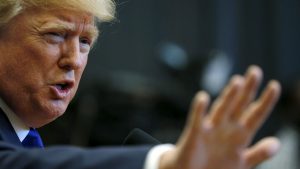 If there’s one thing everyone—big investors, economists, political analysts, small and large businesses, even ordinary families—has in common, it is a fear of uncertainty. It’s one of many overwhelming feelings after the election of Donald Trump to be president of the United States.

The response was almost as emotional in Africa as it was in the US. Those watching from the continent were shocked and disappointed in the US. In a break from diplomatic niceties, Ellen Johnson Sirleaf, the president of Liberia, described Hillary Clinton’s loss as “extremely” sad. Africa’s first Nobel laureate for literature Wole Soyinka said he will make good on his promise to rip up his US green card.
When it comes to Africa, that uncertainty is justified. The inward-looking, isolationist Trump campaign barely touched on Africa at all. There’s genuine concern that Africa could metaphorically drop off the map in a Trump presidency. That prospect is a genuine dark cloud, but we can also find some silver linings.

On the negative side, African trade with the US will likely suffer. Young Africans with hopes of moving to the US for study or work are in little doubt that they’ll be a lot less welcome. More immediately, others worry that the continent’s more repressive leaders will feel emboldened. Some of the earliest congratulations for Trump came from some of Africa’s strongmen and populist leaders.

Despite all this, it’s worth remembering uncertainty isn’t all just about downside. Less trade with the US could force African countries to put more effort into developing stronger trade links with each other. Intra-Africa trade is still a small share of trade for many African countries. And young Africans dissuaded from moving to the US comes with one potential advantage: decades of brain drain can be stalled and Africa’s brightest can focus on problems at home.
The unpredictability of a Trump presidency will create new types of opportunities for Africa and Africans. We may not know what they are yet, but we won’t know if we’re not looking.
*QUARTZ