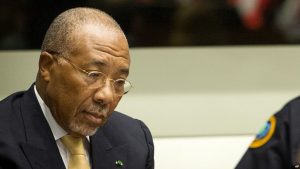 A senior member of Liberia’s largest opposition political party, the Congress for Democratic Change (CDC), said the party cannot confirm nor deny an allegation made by Alan White, former chief of investigations for the United Nations Special Court for Sierra Leone, that party leader George Weah has had discussions with former Liberian President Charles Taylor in Britain and that the jailed Taylor may be trying to interfere with the 2017 presidential election in Liberia perhaps by having his former wife run on the opposition ticket.

Taylor is serving a 50-year prison sentence in Britain after having been found guilty by the UN-backed Special Court for Sierra Leone for his role in the Sierra Leone civil war.

In an interview with VOA’s Peter Clottey, White alleged that part of the discussions that Weah supposedly had with Taylor were to ensure that there is “never a war crimes special court for Liberia”.

Wilson Tarpeh, chief strategist for the CDC, said the party hopes White will provide evidence to substantiate the allegations.

“We cannot confirm nor deny that such a discussion (with Taylor) may have taken place. I’m sure Mr. White will have his evidence to prove that. It still remains an allegation that we cannot confirm nor deny. What we can say is that the Congress for Democratic Change has been in discussion with a number of opposition political parties to form an alliance or a coalition for the purpose of the ensuing 2017 election,” he said.

UN: Taylor is trying to interfere in election

Citing “allegations and the source information,” White told VOA that, “there are allegations that he’s (Taylor) been in discussion with Senator George Weah who has recently signed an agreement to join forces with Jewel Taylor, Taylor’s former wife, to support seeking the presidency and the vice presidency. George will be on top of the ticket…and part of those discussions is to ensure that there is never a war crimes special court for Liberia and Sierra Leone,” White said.

Tarpeh said the Congress for Democratic Change did not sign any agreement per se with Jewel Howard Taylor, a senator for Liberia’s Bong County.

He said his party and two other political parties — the National Patriotic Party and the Liberia People Democratic Party — signed an agreement earlier this month to work together for the 2017 election.

Liberia’s Truth and Reconciliation Commission (TRC), which looked into the causes of the country’s civil war, wants restorative and retributive justice for those who participated in the war.

For example, the commission recommended President Ellen Johnson Sirleaf and 49 other Liberians be subject to public sanctions for their association with perpetrators of war crimes.

But since the publication of the TRC final report in 2008, there have been allegations of a lack of political will to implement the report.

In his interview with VOA, White said he knows of two people who have publicly been supportive of retributive and restorative justice – Vice President Joseph Boakai, who is running in the 2017 election to succeed President Sirleaf and businessman Benoni Urey, also a candidate in the 2017 presidential election.

Tarpeh said White’s comments back up the CDC belief that White is spreading information that is not true. Tarpeh his party has always been in favor of justice in Liberia.

He defended the CDC’s association with the party of former President Charles Taylor and that of former speaker of the House of Representatives, Alex J. Tyler, who has been indicted for corruption.

“My answer to that is that we don’t see anything wrong with it. First the case of Mr. Taylor. Mr. Taylor was charged with a crime for which he is serving time. The institution he belongs to, which is the National Patriotic Party does not necessarily mean the NPP is involved in the criminal act. So you cannot ascribe evil or criminality in dealing with the National Patriotic Party. Again the same analogy. Mr. Alex Tyler is a member of the Liberia People Democratic Party, a former speaker who has been accused of a crime. Under our laws, if you are accused you are presumed innocent until you are proven guilty,” Tarpeh said.