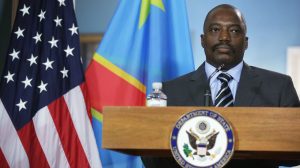 WASHINGTON, DC – AUGUST 04: President of the Democratic Republic of Congo Joseph Kabila listens to remarks before a bilateral meeting with U.S. Secretary of State John Kerry during the U.S.-Africa Leaders Summit at the Department of State August 4, 2014 in Washington, DC. (Photo by Alex Wong/Getty Images)

KINSHASA, Democratic Republic of the Congo — He pledged to “bomb the shit” out of ISIS and suggested that America wouldn’t automatically defend its NATO allies, but beyond that Donald Trump hardly mentioned foreign policy on his renegade march to the White House. Sub-Saharan Africa barely registered, and the Democratic Republic of the Congo (DRC), well, it might as well not exist.

For Congolese President Joseph Kabila, who stands accused of delaying electoral preparations in order to cling to power, that qualifies as good news. Kabila faced mounting pressure from President Barack Obama’s administration to hold elections on time and adhere to constitutional term limits. Now senior figures in his government are holding their breath that Trump’s victory could mean a sudden change in policy.

“We have the impression that Congo is being particularly demonized,” said Tryphon Kin-Kiey Mulumba, Kabila’s minister of parliamentary affairs, adding that he hopes the next U.S. administration will be more supportive than this one. “Congo has had better relations with the U.S. each time there has been a Republican president in the White House.”

Not only has Obama dispatched his special envoy for the Great Lakes Region, Tom Perriello, to push Kabila on elections and term limits, his administration has slapped targeted sanctions on three of Kabila’s top generals — two of them for violently repressing political demonstrations and the third for threatening to kill opposition candidates. Elections were supposed to happen this month, and Kabila was to step down at the end of his term on Dec. 19, although neither will happen on time.

But the Congolese president has simply dug in harder. Last month, he struck a deal with some members of the opposition that will allow him to delay the election for 18 months, time many suspect he will use to amend the constitution to do away with term limits. His government has also banned all political protests and temporarily blocked broadcasts of Radio France Internationale and Radio Okapi, a U.N.-run radio station.

If Hillary Clinton had won, Perriello probably would have kept his job, and more Kabila loyalists would have found themselves in America’s crosshairs. But Trump’s lack of discernible interest in sub-Saharan Africa means that it’s difficult to forecast the nature of U.S. engagement with the region over the next four years.

“Nobody has any idea what’s going to happen,” one State Department official based in the Congolese capital of Kinshasa told Foreign Policy.

One thing that’s for certain is that Kabila and his allies will be glad to see the back of the Obama White House. Within hours of Trump’s victory, the notoriously uncommunicative Congolese president had congratulated his new counterpart on his “brilliant election.” Lambert Mende Omalanga, Kabila’s minister of information, also welcomed the outcome, telling local media that his government had “lived badly in recent years with the Democratic administration, which has conducted itself towards us with a cavalier attitude.” Omalanga added that he hoped the U.S. sanctions “will end with the arrival of a Republican administration.”

Part of the affinity for Republicans seems to stem from nostalgia for the era of Mobutu Sese Seko, despite the fact that it was Kabila’s father, Laurent-Désiré, who ousted the charismatic dictator in 1997. But during Mobutu’s 32-year reign, the United States, and Republican administrations in particular, showered him with financial support in exchange for being a staunch ally during the Cold War. “President Mobutu had a much better rapport with Nixon, Reagan, and Bush senior,” recalls Kin-Kiey, who served in Mobutu’s cabinet.

But there is also a belief that Republicans are less interested in human rights and democratic governance. “Republicans have usually not bothered to criticize the government on human rights violations,” said Georges Nzongola-Ntalaja, a Congolese professor of African studies at the University of North Carolina. “Trump probably won’t be very concerned about what’s happening in Africa in countries like the DRC.”

“It’s not that Trump will be chummy with Kabila,” said Jason Stearns, director of the Congo Research Group (CRG) at New York University. “But Congo will be in no way a priority for the new administration, and they’ll struggle to find people who care about and know the dossier. This will give Kabila space, because the U.S. has played a ringleader role among donors in pushing for sanctions and applying pressure on the president.”

But there is another reason Kabila’s allies are reveling in Trump’s victory: Neither the media nor the pollsters saw it coming. Recent polling by Stearns’ CRG showed that Kabila would receive only 8 percent of the vote if elections were held today. By contrast, exiled former Gov. Moise Katumbi would receive 33 percent of the vote, the pollsters found. The data caused considerable consternation among the president’s supporters, including Kin-Kiey. But Trump’s surprise election — Kin-Kiey called it “truly the Waterloo of polling” — has given Kabila’s supporters reason to believe he might still be capable of securing a popular mandate.

“President Kabila is much more popular than the poll says,” he said. “The Katumbi phenomenon is the Clinton phenomenon. He is very sexy, just sexy, he sells himself well.”

In truth, the Congolese opposition was hardly more enthusiastic than Kabila’s government at the prospect of a Clinton administration. The reason is Rwanda, Congo’s tiny eastern neighbor, which has been accused of interfering in the country’s war-riddled east for two decades. Rwanda was behind the rebellion that overthrew Mobutu and installed the elder Kabila in his place, but Laurent-Désiré soon fell out with his Rwandan benefactors, who invaded again in 1998 — this time in an attempt to oust him. They failed, but the war lasted until 2003 and millions perished. Since then, armed groups have continued to terrorize the eastern part of the country, some with the help of Rwanda.

“I think the position of the opposition is primarily based on dislike of the Clintons,” said Nzongola-Ntalaja. “Bill Clinton is very close to Rwandan President Paul Kagame … so people tend to be distrustful of them and see them as people who have been backing a country which has plundered and continues to plunder the Congo, either directly or through proxies.”

Martin Fayulu, a leading figure in the Rassemblement, the largest opposition coalition, and one of Kabila’s noisiest critics, agreed. “Some Congolese thought that it would be a disaster if Mrs. Clinton won the election,” he said. “For many Congolese, particularly in the east, Donald Trump’s victory is also their victory.”

Though its leaders shed no tears over Clinton’s loss, the Congolese opposition does hope to see a continuation of Obama’s democracy promotion policies. Human-rights activists do as well. “We welcome Trump’s election,” said Georges Kapiamba, the president of the Congolese Association for Access to Justice, a rights group. “But we ask him to pursue Obama’s policy towards Congo.”

Trump may be unlikely to make these policies his own, but he is not the only force driving U.S. policy in Congo. Congress, which has offered bipartisan support for Obama’s policies, could very well continue to pressure Kabila to abide by the constitution. Indeed on Nov. 1, it sent a letter to Obama urging him to sanction the interior minister and national intelligence agency chief in order to “send a clear signal the United States stands firmly with the Congolese people and their desire for a democratic transition of power.”

“Trump won’t be alone conducting African policy,” Fayulu said. “I have met with subcommittee members of the House and Senate, and they are very strong against Kabila.” Nzongala-Ntalaja agrees: Both Africa subcommittees in Congress “have been quite supportive of democracy,” he said. “Whatever the administration may want to do, Congress is still a factor as well.”

Even so, Obama’s departure will probably mean a loss of leadership on Congo from the executive branch — and a lessening of the pressure on Kabila. “What is perhaps most likely is that Kabila will be more or less ignored under a Trump presidency,” said Zachary Donnenfeld, a researcher at the Institute of Security Studies in Pretoria, South Africa.

Judging by its reaction to the U.S. election, Kabila’s government will gladly settle for that.