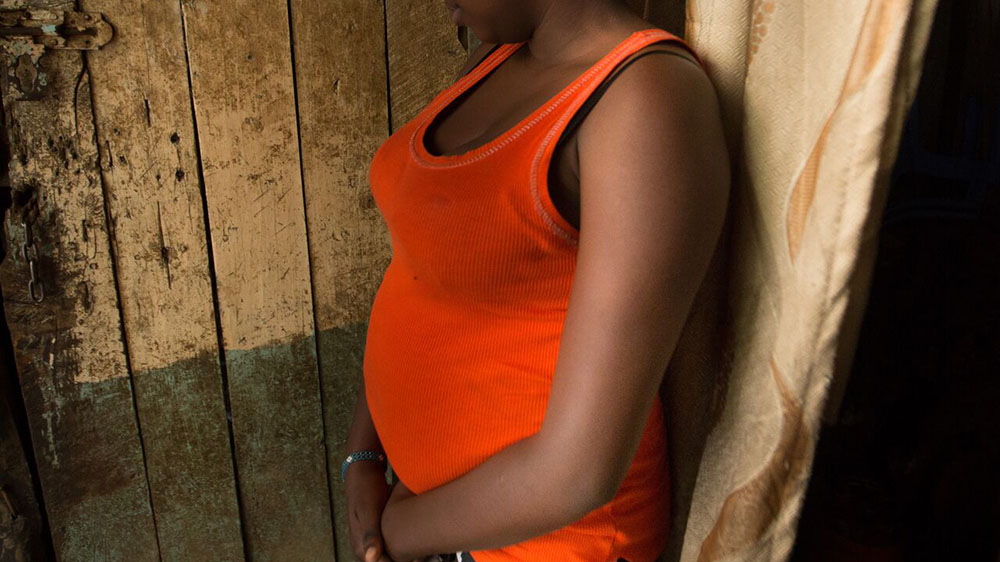 Nairobi, Kenya – In the wood-panelled interior of Nairobi‘s High Court, a battle is due to begin on December 15 that will determine whether hundreds of thousands of women each year are committing criminal acts.

The issue of abortion in Kenya has been mired in confusion and contention for the past six years.

In 2010, a new constitution was passed, heralded globally as a progressive foundational document for its principles of gender equality in parliament; freedom of media; and formation of an independent Human Rights and Equality Commission to investigate human rights abuses.

The trouble is that much of what was included has met resistance and debate.

That includes the three provisions that permit abortions where, “in the opinion of a trained health professional, there is a need for emergency treatment, or the life or health of the mother is in danger, or if permitted by any other written law.”

Reproductive rights advocates filed a petition against the Ministry of Health and Attorney General last year, alleging a lack of guidelines and policy is putting the health – and lives – of women in danger.

In 2008, the World Health Organization said Eastern and Middle Africa had the highest global rates of unsafe abortions, at 36 per 1,000 reproductive-aged women.

Josephine Mongare, the chair of Kenya’s Federation of Women Lawyers (FIDA) that led the petition, said how wide the interpretation of “health” is – such as whether it includes emotional or mental health – and what constitutes a “trained health professional” needs guidance.

“This is what the law has not defined and the doctor must make those decisions,” she said. Unlike other jurisdictions with similar laws, there are no further laws, guidelines or policies in place to expand on the succinct constitutional passage.

The Ministry of Health put out guidelines in 2012 to help doctors determine whether they could legally perform an abortion, before withdrawing them in 2013 after a caustic backlash in this staunchly Christian country.

He said it was not the place for the Ministry of Health to guide medics on when to terminate a human life, as the church sees abortion – and therefore it was necessary for the guidelines to be retracted.

“Who has given these individuals the right to decide who should die?” said Wanjohi.

The issue of abortion must be decided by all quarters of society, he said, and it is the role of the church to safeguard human life.

“Human life is sacred, that’s what we hold, right from conception until natural death. There is no room for saying so and so should be eliminated or that right should be waived away,” he said.

Among other things, the 2012 guidelines outlined where, how, by whom and under which circumstances an abortion should be performed. Crucially, it also stated that mental health was included in the criteria of ‘health.’

After the retraction, the director of medical services wrote a memo to all health workers directing them not to participate in safe abortion training.

Mongare said that any doctor who performs an abortion assumes a great deal of legal risk, which makes most reluctant to perform the procedure. This, she added, prompts women to turn to dangerous back-alley abortions and witchdoctors.

“People have to look for backstreet medical institutions, those who will not be held accountable by anyone. It’s a statement of fact that women die when abortions are done by unqualified people,” she said.

Professor Boaz Otieno-Nyunya convenor of the KMA Reproductive Health Committee, estimated more than half of all abortions are performed unsafely, with herbs, coat hangers, spoons, knitting needles and harmful pharmaceuticals.

In the past, criminal cases have been taken against medical professionals who have performed abortions, heightening the need to establish legality around abortion.

According to Kenya National Bureau of Statistics data, between 2011 and 2015 there were 177 cases reported to police against men and women for “procuring abortion” – the offence that both women seeking abortions and medics are generally charged with, though several have been charged with murder.

The FIDA petition wants the court to decide whether the Ministry of Health is failing constitutional duties by having retracted the guidelines.

In February, a High Court judge determined that a bench of three judges should be appointed by the Chief Justice to hear the public interest case – with 17 different social, religious and legal groups lining up to have their say during the case in December.

Human rights NGO, the East African Centre for Law and Justice, which uses legal avenues to advocate for change, is one of those submitters.

Executive director Joy Mdivo said that abortion has no legal force in the country without extra legislation.

“The constitution by definition is framework, it is never policy, it’s never legislation … if you ask me, it should have remained with ‘Everybody has a right to life’. How this is interpreted should be left to our parliament and elected representatives. “

In Kenya, she added, “personhood” is presumed at conception. That means abortion is choosing one person’s life over another, she said, and should only be done when a mother’s life is in danger.

Mongare, however, said that the constitution is legally binding in itself; a point of constitutional law that will be determined during the December case.

Mongare wants to see abortion legalised so that women can have access to safe abortions conducted by medical professionals without fear of reprisal. Mdivo believes that the best solution is to improve adoption and fostering options so women don’t turn to abortion out of desperation.

What both women can agree on, however, is that the numbers of women undergoing dangerous and unhygienic abortion are too high.

Pregnant and trapped in poverty

It took Phyllis, who declined to give her real name, two weeks to realise that her husband wasn’t coming back to her. He had taken all of their possessions, including her clothes and their marital bed; but left behind a four-year-old daughter and one-year-old son.

“He took everything. He told me we are going back home to the countryside … he was meant to come back for me but he never came [and] I had to remain with the children, struggling.”

With no money, Phyllis, now 35, said she turned to survival sex in exchange for food and shelter in the Nairobi slum where they were living.

“I got a friend who was helping me. He wanted me to have his child and foolishly I was engaging in unprotected sex, hoping not to get pregnant. “

The man had a wife and family in his hometown but Phyllis felt unable to refuse his sexual demands – she needed him.

Five months pregnant and scared, Phyllis found a woman inside the slum who said she could terminate her pregnancy.

She arrived at a makeshift clinic in the woman’s brother’s shanty house early one morning.

Several hours after the abortion, which she was awake for but has no idea how it was performed, she was struck by stomach cramps and heavy bleeding that lasted for days. During this time she was in fits of tears and couldn’t eat.

What followed was a month of light bleeding, then months more of unpleasant-smelling discharge that only stopped once she visited a doctor outside the slum.

Her relationship soon dissolved and Phyllis took a vow of abstinence for another year until she had unprotected sex with another man.

This led to another abortion in her slum, though this time she had an uncomplicated procedure.

Phyllis said she never considered she could die from an abortion; but the danger is real.

Otieno-Nyunya said unsafe abortion is the single leading cause of maternal death.

“A third of maternal deaths, 2,000 or so deaths, that occur every year can be tracked to abortion and abortion complications,” he said.

At 15, Mary was unaware both of the risks of unprotected sex and unsafe abortion. She was persuaded to have sex with her boyfriend, who promised her “heaven and earth,” to sleep with him.

With her boyfriend refusing to marry her, Mary visited a local witch doctor in Nairobi‘s urban slum Mathare where she lives. On three separate visits the man administered various concoctions made from herbal leaves and eggs, but nothing happened.

“My stomach grew big and [I worried] my mum would beat me.”

She visited a local pharmacist who gave her abortion-inducing pharmaceuticals. This time it worked – but left her bed-ridden with spot bleeding for two months and led to her dropping out of school.

She now has a baby with another man, who has since left her, but still lives with regret about the choice she made at a tender age.

“I was very young, but I’m always depressed when I think of it. If I had a second thought, I would have kept the baby. But I only had one thought: to take out the baby because the man rejected me, my mum doesn’t know I’m pregnant, where will I end up? Instead of killing myself I decided to kill the baby,” said Mary.

Safety comes at a price

Otieno-Nyunya said women from the poorest communities are most adversely affected.

“That’s a major part of it globally. Abortion is a class [battle].

“Even in countries where abortion is completely illegal, people go across borders if they have means while, more locally, somebody who has the money will go to a private facility and get a safe abortion. But a woman who cannot afford this will suffer the consequences of unsafe abortion.”

For wealthy Kenyans, certain private clinics where doctors are happy to take on the legal uncertainty are an option.

READ MORE: The women dying for an abortion in Sierra Leone

Safe abortions at clinics can cost about 20,000 Kenyan shillings ($200), whereas unsafe abortions are roughly a tenth of that price and payments can be made in instalments. It is not uncommon for household goods, such as televisions, to be included in those payments.

In her slum, Phyllis estimates that there are more than 50 corrugated iron “abortion clinics” for a population of about 100,000.

She said one major obstacle to addressing the issue is a lack of knowledge, access and acceptance of modern contraceptive methods.

Now a reproductive health campaigner in her community, Phyllis has heard countless tales of women hiding contraceptive pills from husbands under the stove, a place many Kenyan men typically don’t go near.

“There are myths that women using family planning are cold in bed, they don’t like sex, the men cannot enjoy having sex with the women.”

But many men will also run away from a wife if she has too many children, she said.

“The challenges I’ve gone through have made me a strong woman. I don’t want women to suffer, I want them to stand by themselves. I want a society where a woman can speak and be heard.”