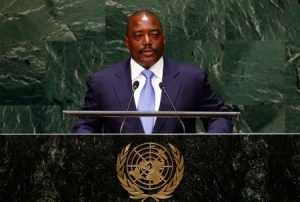 KINSHASA (Reuters) – Congo’s prime minister and cabinet resigned on Monday as part of a deal that extends the tenure of President Joseph Kabila, who also defended the right of the Congolese people to change the constitution currently barring him from running again.

Kabila is supposed to step down when his mandate runs out on Dec. 19, but his ruling coalition and part of the opposition agreed last month to delay a presidential vote until April 2018, citing logistical problems in registering millions of voters.

“I have just handed in my resignation and that of my government to the president of the republic in line with the spirit of the political accord signed on Oct. 18,” Prime Minister Augustin Matata Ponyo said in a statement.

The government’s departure should pave the way for a new cabinet with posts for some of those opposition figures who agreed to the election delay and to Kabila staying on as leader of the Democratic Republic of Congo.

However, the main opposition bloc has rejected the accord and more than 50 people died in street protests in September aimed at increasing pressure on Kabila to step down himself.

Kabila’s critics say his aim is to change the constitution, which limits him to two terms in office, in order to secure a third. The country’s constitutional court has given the go-ahead for the rescheduling of the election.

At a press conference on Monday, Communications Minister Lambert Mende quoted Kabila as pledging to respect the constitution, which ruled out running for a third term, after a visit by a U.N. Security Council delegation over the weekend meant to press for a peaceful transition.

“I have never stopped saying that the constitution will be respected and it excludes the possibility of a third term,” he said.

But he added: “This does not in any way remove the right of the Congolese, like all sovereign people, to modify the constitution in three, four or five years, if they so desire.”

Stephen Hickey, political counselor at the UK Mission to the United Nations, had expressed concern over Kabila’s insistence that the constitution could be amended.

Kabila became president following the assassination of his father in 2001, and he won disputed elections in 2006 and 2011.

World powers fear that the political impasse over Kabila’s continued rule could reignite chaos in the vast nation spanning Africa’s largest forest. Millions died in conflicts in Congo between 1998 and 2003 that sucked in armies from neighbouring states around the region.

As pressure mounts on Kabila, the government has taken a tougher line on media. Radio France International (RFI) and U.N.-funded Radio Okapi have both had their signals jammed for the past two weeks.

“Since (Radio Okapi) has systematically deviated from being a U.N. radio station to become a partisan station,” the government judged it to have violated its agreement, Mende told the news conference.