In 2006, all of a decade ago, Mikel John Obi joined Chelsea for a £16m transfer fee and the rest, as they say, is history. 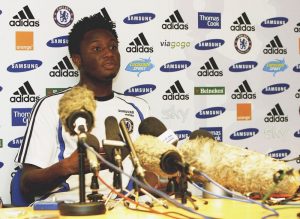 The 29-year-old midfielder has amassed 373 appearances for the Blues since, winning 10 trophies in the process and making that initial transfer fee look like a bargain.

According to reports however, his time at the club is drawing to a close. There has been a complete change to Chelsea’s midfield shape under new coach Conte and with three box-to-box midfielders ahead of him in the pecking order, Mikel has yet to even play for Chelsea this season. As Conte revealed in his press conference, Mikel has been nursing a minor injury (in addition to being away with Nigeria at the Olympics), but he will be free to discuss moves with other clubs starting in January

It is well documented how Jose Mourinho transformed Mikel into a defensive midfielder for Chelsea. Conversely, he plays as a more attacking midfielder with his national Nigeria team. Taking this into consideration, Mikel may well have a suitable skillset to continue in Chelsea’s current midfield, but Matic, Kante and Chalobah have so far provided stronger cases.

The Chelsea team seems to be gradually taking a new direction. John Terry, Branislav Ivanovic and Mikel John Obi are the last remaining legends at the club after departures of Petr Cech, Frank Lampard, Ashley Cole, and Didier Drogba in recent seasons. Youth players from the development teams are being asked to make more of an impact, and as such, Nathaniel Chalobah and Ruben Loftus-Cheek have been granted well-earned game time. Mikel has spoken of the young players’ abilities in the past and it is clear he understands Chelsea’s position.

Loftus-Cheek is a great player, Chalobah is a good player.

You can see the future of Chelsea right there, I am sure that these players will play a massive role at this football club for many years to come.

At 29, the experienced player still has a lot left to give. Finding himself in the final year of contract at Stamford Bridge, it is becoming increasingly obvious that the midfield legend will move on after a decade at Chelsea. Here’s to a Mikel farewell.