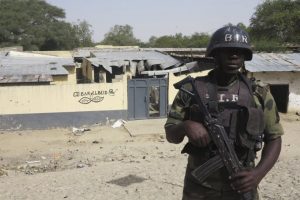 Cameroon has reopened its border with Nigeria and relaunched business activities with the neighbouring nation. The border was closed three years ago, as security deteriorated due to attacks carried out by Boko Haram terrorists.

Cameroon has reopened its border with Nigeria and relaunched business activities with the neighbouring nation. The border was closed three years ago, as security deteriorated due to attacks carried out by Boko Haram terrorist.

In January 2016, Cameroon closed most of its marketsalong the border with north-eastern Nigeria following the attacks. Although some argued it would undermine people’s businesses, the authorities said the decision was made for security reasons. Attackers often disguised themselves as traders and detonated explosives in crowded places such as markets.

Boko Haram has been carrying out attacks in northeastern Nigeria and neighbouring countries since 2009.

In one of the deadliest attacks in Cameroon’s Far North region, at least 32 people were killed in coordinated bomb blasts in Bodo, a village near the border with Nigeria, on 25 January 2016.

Although attacks are still taking place, they have decreased in recent months, leading to suggestions a multinational task force set up in 2015 has weakened the insurgents.

Since Cameroon reopened the border, hundreds of merchants have returned to the Limani border market in the Far North. The government warned business people travelling to Nigeria must be screened and escorted once they cross back into Cameroon.

The decision to reopen the border was welcome by the communities in both Cameroon and Nigeria.

“We thank God that things will be okay now because this place is a revenue generating place for both Nigeria, Cameroon and Chad,” the secretary-general of Nigeria’s Gambari Ngara market, Alhadji Bakari Balje, was quoted by Voice of America as saying.

“And we can’t allow room for manipulation just because of that small remnant of Boko Haram to exercise their power over us. Boko Haram has already been defeated. What remains is only remnants of it.”

In addition to its own military operation Lafiya Dole against the insurgents, Nigeria is leading the regional offensive – consisting of 8,700 troops from Nigeria, Niger, Chad, Cameroon and Benin – to tackle Boko Haram.

The offensive has scored some successes, such as the recapture of key territories and the release of thousands of civilians held captive by the group.

The Nigerian security forces are also succeeding in foiling most of the attacks planned by Boko Haram, renowned for kidnapping civilians and forcing them to carry out suicide-bombing missions.

Although Nigeria’s President MuhammaduBuhari declared a technical victory over the fight against the insurgents in December 2105, Boko Haram still carries out attacks. Security experts warn that underlying issues such as disenfranchisement, poverty and strong links with the Islamic State (Isis) would continue to pose major threats to stability in the region.

Shekau, however, denied he had been replaced and claimed al-Barnawi was staging a coup against him.

Value advisory is a necessity for business transformation success