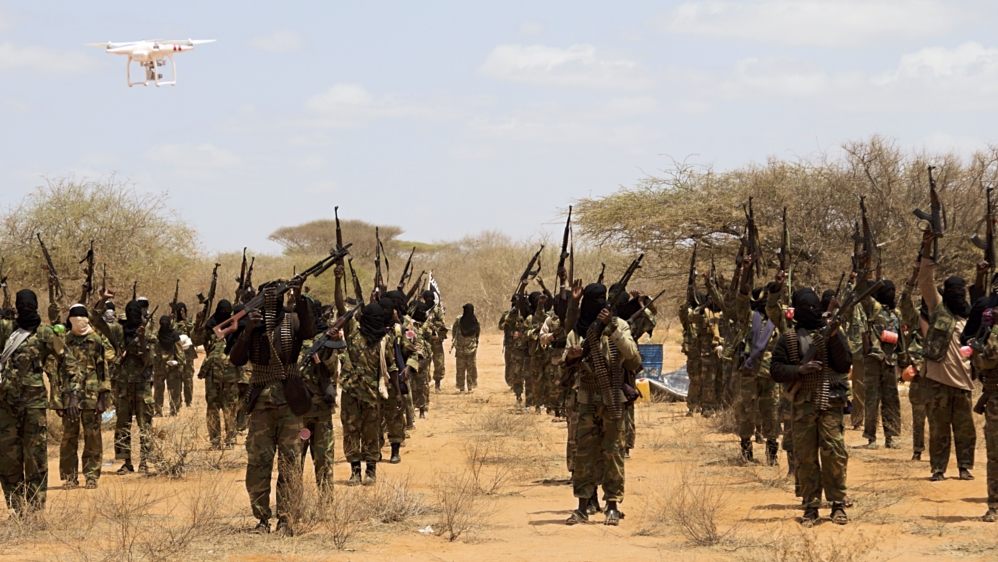 “Anything that flies that’s not a bird, we consider it an enemy.”

That’s how Hassan Yakub, al-Shabab’s most senior leader in Somalia’s Galguduud region, responded when I requested that we use a drone to film his fighters at one of the armed group’s training camps.

His reaction was not surprising.

IN PICTURES: Al-Shabab moves in on central Somalia

Over the past few years, drone strikes have killed dozens of al-Shabab fighters, including the group’s former leader and at least 10 of its senior commanders.

The last drone hit to target the al-Qaeda-linked group’s leaders happened just a month ago, in the East African country’s Lower Juba region.

Al-Shabab fighters have been trained to hide from drones or, if the unmanned aircraft are low enough, to shoot them down.

Our local fixer was equally reluctant.

Our cameraman was also not enthusiastic about taking a drone to an area controlled by al-Shabab.

To complicate things further, the drone had to be operated using a smartphone – another device the armed group has banned in the regions it controls.

Al-Shabab is so sensitive about mobile phones that in many areas they don’t allow phones with cameras – let alone a smartphone like the one we were planning on using.

It was a risky and delicate move. You spend months negotiating access, only to risk been kicked out for bringing a drone.

Then there were other security matters to worry about.

What if the drone was compromised and we were tracked down by security services? Would they accuse the team of being US spies?

Al-Shabab has killed by firing squad people they accuse of being spies.

And in rural Somalia, most bathrooms have an open roof and the possibility that residents could report us for flying a drone over their wash rooms while they were attending to nature’s call was a real and frightening possibility.

If that happened, what were the consequences?

Flogging in public at best, perhaps.

Once the group’s leaders granted us permission, the fighters were informed by their commander that the drone was not an American one and that it was not going to rain down missiles on them.

Curiosity quickly set in. The fighters wanted to see what drone footage looked like.

“We all look the same,” a young plump fighter said after seeing what the unmanned aircraft had captured.

“You can’t tell who is fat or short. We all look the same. This is good,” he said out loud, drawing big laughs from fellow fighters.

“So, this is how the Americans see things? You can’t recognise anyone from this,” a fighter said.

“No wonder they bomb the wrong targets,” another shouted.

As we packed up to leave the al-Shabab training camp, the fighters’ commander warned his relaxed men that anything in the skies from that moment on was again an enemy aircraft – and not a harmless drone.

The post ‘Anything that flies is an enemy’: Filming al-Shabab with a drone appeared first on African Media Agency.