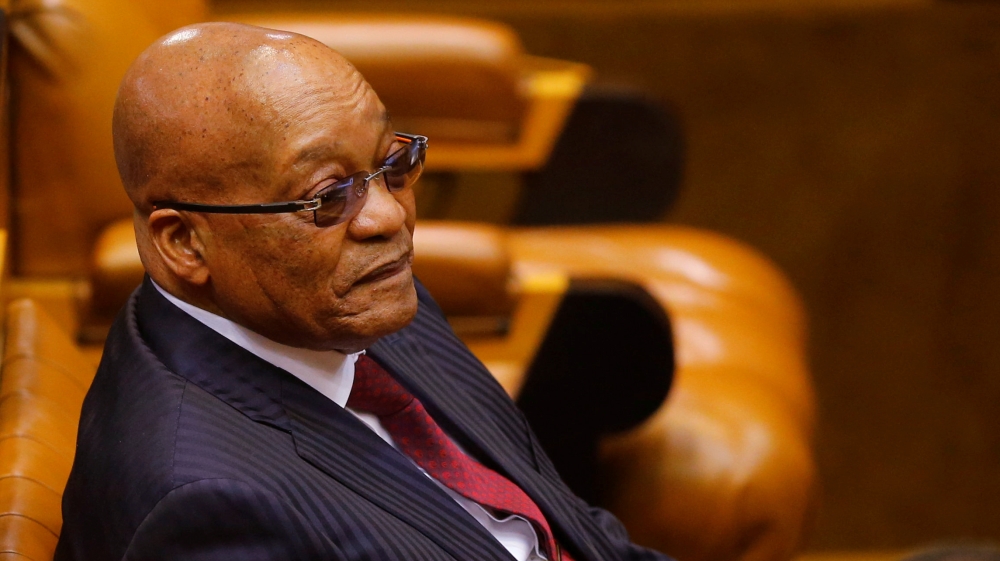 While ANC secretary-general Gwede Mantashe has labelled the calls for Zuma’s exit “premature and unfounded”, the opposition has unexpected backing from the so-called stalwarts of the party itself, ANC veterans and heroes.

One hundred and one ANC veterans have signed a document expressing serious concerns about the state of the country. One of these individuals, Frank Chikane, former director general of the Presidency of South Africa under Nelson Mandela’s successor, Thabo Mbeki, told Al Jazeera that not only must Zuma go, the entire ANC leadership must be replaced.

“What we need is a total change and cleaning up of the system, ridding the corruption in ANC. If the president responded to the call for him to resign, it would help a great deal, but not solve the whole problem,” Chikane said.

The latest turmoil erupted last week, as angry South Africans took to the streets of the country’s capital Pretoria, upon the release of a report from the Public Protector Thuli Mandonsela on “state capture”.

The long-awaited report reveals “possible corruption”, suggesting that a wealthy Indian family – the Guptas – have been affecting government decisions such as ministerial appointments.

“It is an indication that our leadership has been captured,” Chikane said.

According to Dr Fazel Randera, a former Truth and Reconciliation commissioner, the disenchanted ANC leaders are reflecting the sentiments of a disenchanted public.

“It is about the values and principles we fought for in 1994. Can we say 22 years later that we are still living up to these values when we are charged with corruption and all these other things?” he asked during an interview with Al Jazeera.

Randera referred to the constitutional court ruling in July, establishing that President Jacob Zuma spent taxpayers’ money to improve his private estate, as well as to the latest allegations made in Madonsela’s report. The allegations add to a growing list of disasters for President Zuma and the ANC.

“There has been one story after another, like a civilian aircraft – the Guptas – being allowed to land on an air force base, the building of Zuma’s private home using taxpayers’ money, the position taken by the president and parliament on the report on state capture. It speaks to the manner in which the ANC government projects itself, and rules,” said Randera.

Ben Turok, the former anti-apartheid activist, also added to the criticism of Zuma. “He is a disgrace to the country. He is dishonest, and he has deployed his cronies in key positions, grossly undermining the democratic nature and integrity of the State.”

While demonstrations and political uproar are not rare in South Africa, this time Jacob Zuma faces criticism from former allies. ANC veterans had been demanding Zuma’s departure even before the report was released, and intensifying their campaigning after the publication of Mandonsela’s state capture report.

In the report, Mandonsela recommended that a state capture commission be appointed, to which ANC has agreed. Although one recommendation, that Zuma himself, rather than the Chief Justice, must appoint the judge, has attracted scrutiny.

To Zuma’s critics such as Turok, this statement is absurd. Frank Chikane agreed. “You cannot have the person alleged of violating executive ethics appointing a commission that is going to investigate himself. It does not make sense to me,” he said.

The state capture report released by Mandonsela, whose term as public protector ended in October, states that the Chief Justice should decide who is going to be judge. This could turn out to be very bad news for Jacob Zuma, but it might be exactly what the country needs, said Chikane.

It is a matter of confidence in the state, that is at stake, according to Chikane. “We need to build confidence, not manipulate outcomes.”

For many South Africans, a ministerial chaos in December last year, caused by the short-lived appointment of the inexperienced parliamentarian David van Rooyen, serving as one of three finance ministers in only four days, was the straw that broke camel’s back.

In this case, it broke the trust in Zuma.

The chaos was initiated by Zuma’s sacking of the finance minister at the time who had criticised government spending, the popular Nhlanha Nene. The following appointment of Van Rooyen, and the fact that the Gupta family allegedly knew about this appointment before it was made public by the president, was, in Madonsela’s report, labelled as worrying.

The compelling evidence in the report suggests that Van Rooyen visited the Gupta family estate seven times in the days leading up to his surprising appointment as finance minister.

The report also includes testimony given by Deputy Finance Minister Mcebisi Jonas, claiming that the Gupta family, represented by Ajay Gupta, offered him the finance minister job, in exchange for 600 million rand ($45m), and favours to the Gupta family business.

The allegations, combined with the testimony given by Deputy Minister Jonas, are more than enough to remove Zuma from office, according to Turok.

“What more do we want? Mcebisi Jonas says that he was affected by a Gupta. He has not been challenged or prosecuted for lying, therefore we must accept that he was telling the truth,” Turok said. The Gupta family has denied the allegations.

In Turok’s opinion, South Africa can no longer tolerate Jacob Zuma as president.

“We are faced with so many bad and wrong decisions that we cannot tolerate it any further,” Turok said, referring not only to the disenchanted public, but also to the halting economy.

The episode led to the rand dropping 5 percent in only four days, wiping billions of rands off the South African stock market.

Some refer to the present situation in South Africa as “Zuma’s final days of power”, the closest ally of Zuma to abandon ship in recent days, ANC Chief Whip Jackson Mthembu, told a local newspaper that the governing party with its current leadership is worse than its apartheid predecessors.

For Turok, the pressure on Jacob Zuma is unprecedented. “There is so much discomfort with Zuma, that it cannot continue. Everyone: media, business, students, labour unions, are calling for his departure,” he said.

For the good of the country

Chikane agrees that the situation is worse than ever, and that it could be the end of ANC.

“The ANC needs to take radical measures. The party needs to get on the side of the people, otherwise we can kiss the ANC goodbye. ANC will lose the 2019 election, if it does not take a stand now,” he warned.

Chikane has some advice for Zuma. “One can step aside, despite believing that you are innocent, for the good of the future of the country. That is what a leader would do,” he said.

Turok thinks the crisis will worsen if Zuma is set on fighting to the bitter end.

“Zuma is a master tactician; he is superb at that. But if he puts in place more and more people who do his bidding, not there because of competence, it is a path that is extremely dangerous.”

Chikane has hope, but demands immediate action, as well as a change of course from the leadership in ANC in the moment he describes as a low-point in the party’s history.

“The alternative is too ghastly to imagine,” he said, underlining the need to restore confidence in ANC. “It must be now. Not in 2017, not in 2019 during the election, it is now. If they maintain the current trajectory, ANC will not survive.”

Should Zuma survive the no-confidence vote today, he and the ANC still have to survive the lack of confidence shown by ANC icons, and the disenchanted people of South Africa.