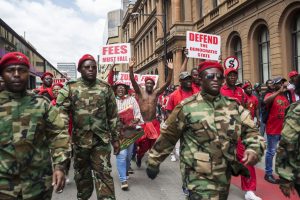 The country that so inspired many South Africans during their struggle had them, as it had a lot of us here, deeply worried.
PHOTOGRAPH BY IHSAAN HAFFEJEE / ANDALOU AGENCY / GETTY

When I first went to South Africa, in 1985, during some of the darkest days of the country’s violently repressive apartheid regime, one of the bright lights I found was the inspiration that protesters drew from the American civil-rights revolution and its victory over apartheid-like discrimination. Even in the midst of torture and trials—black anti-apartheid opponents tossed from planes into the sea; the activist Stephen Biko murdered; Nelson Mandela and his comrades sentenced to life in prison—there was the example of Martin Luther King, Jr., and the thousands who had demanded that America live up to its promise of freedom and justice for all. Once Mandela was released, in 1990, he told me that, in prison, he had thought often of King and his allies, and of the anti-apartheid movement in the United States.

In the years since, friendships and relationships continued. My husband, Ronald, and I moved to South Africa in the early years of its multiracial democracy and lived there for almost twenty years. And though we moved back to the United States in 2012, we have travelled back from time to time, and South African friends visit us here in America and otherwise keep in touch. But in recent months the e-mails and Skype chats and talks with visiting friends have become intense and sombre and worrying in a way that I haven’t previously experienced. Sooner or later, the conversation turns to disturbing reports of the direction of South African’s political culture, with accounts of ongoing corruption at the highest levels of the government of President Jacob Zuma. He is scheduled to remain in office until national elections in 2019, but is facing a revolt within his party. It is not of the same kind that drove his predecessor, Thabo Mbeki, prematurely from office. Mbeki was not accused of personal corruption; what put him in jeopardy was his alleged effort to undermine Zuma’s chances of succeeding him. When the time came, Mbeki resigned rather than waiting to be removed, in part to avoid a political crisis ahead of the 2009 general election. (In South Africa, the President is chosen by Parliament immediately after an election.) At the time, Zuma had already fought off charges of corruption to win the leadership of his party, the African National Congress, and of the country.

But the stigma and stain of corruption never went away; instead, they grew as Zuma financed a lavish renovation of his kraal (or homestead) in his home base, Nkandla, in KwaZulu-Natal, with state money, and was subject to allegations of cronyism. Last week, South Africa’s public protector, an ombudsman with constitutional powers, issued what has become known as the “state-capture report.” It called for a full judicial inquiry into possible corruption and conflicts of interest involving Zuma, senior state officials, and members of the wealthy Gupta family. Reports indicate that the Guptas plan to defend themselves against the charges at the upcoming inquiry.

Zuma has dismissed the report and seems ready to fight it in court.

Ahmed Kathrada, a revered eighty-seven-year-old anti-apartheid activist who served time in prison with Mandela, wrote an open letter earlier this year about what he called “a crisis of confidence” in the leadership of the country. He called for Zuma to step down. A few months later, Jackson Mthembu, the chief whip of the A.N.C., who was once one of the staunchest supporters of his party—often coming down hard on journalists who questioned anything the A.N.C. did—called on the entire A.N.C. executive leadership, including himself, to step down. Mthembu was quoted in the City Press as saying, of his fellow-leaders, that, in certain respects, “We are not only equal to the apartheid state, we are worse.” That may be an extreme statement, but it captures the frustration and disappointment of many in South Africa. And it reminded me of something F. W. de Klerk, the last apartheid-era President, told me when I interviewed him in Johannesburg shortly before Mandela and the A.N.C. assumed power, in 1994. I had asked him how it was going to feel being out of power. He responded, almost jocularly, that his ruling party would likely not be out of power long, since a liberation movement had never successfully run a country. (I didn’t bother to bring up our American Revolution, among other examples, not least because his reference was clearly to countries in Africa.)

As the unfolding political crisis grows, universities around the country have been engulfed with protests over proposed national tuition hikes. The University of the Witwatersrand, situated a few blocks from where I used to live in Johannesburg—I enjoyed walking my dog around its sprawling grounds—has been shut down, as violence has spread on the campus. In recent days, someone set a fire in the library; a shelf of books burned before it could be put out. Thirteen students have been suspended in the past four weeks, some arrested, others intimidated by a force of police officers brought on to the campus. As exam time approached and the protests continued, arrangements were made to extend the exam period for two weeks. At least one group of students took their finals in their professor’s living room.

That professor, as it happens, is a friend of mine, and generally a big South Africa booster. When I wrote to ask him about the developments at Wits, as the university is known, and elsewhere, he responded, “South Africa these days is not for the fainthearted.” When I asked another friend, a doctor and loyal A.N.C. member, for his take on what on earth was going on in the country we both loved, he quickly replied, “We must continue to believe that we live in a constitutional democracy.”

But the responses I got from other friends included questions about what seems to them like our challenges to our own constitutional democracy. I had just done a conversation for “PBS NewsHour” on the N-word, arising out of how it was recently used by a white man against an African-American reporter, and it resonated in South Africa, which has its own N-word that starts with a “K.” My South African friends also wrote in disbelief of threats of revolt and possible violence in the U.S. if one party fails to win the Presidency. The country that so inspired them during their struggle has them, as it has a lot of us here, deeply worried. The issue is not only the damaging optics of this campaign season but the impact those optics will have within our country, as well as in countries like South Africa, where our beacon light, albeit imperfect, nevertheless has helped to light their often treacherous path to inclusive democracy. As a South African journalist colleague wrote to me on Tuesday morning, “Just writing to wish you all the best with elections. We are watching with bated breath hoping that America will vote wisely. Things are bad enough as it is down here—the last thing we need is a bad role model for our African leaders.”

Indeed, my work as a journalist has taken me to many other countries in Africa that are also continuing to struggle in their bumpy strides toward democratic freedom and the greater good. As I listened, during the campaign to cacophonous debates in our media that have nothing to do with the substantive issues facing our democracy, I have a hard time telling my South African friends not to worry. That became harder still in the early morning hours of November 9th, when it became clear that Donald Trump had won. A friend wrote to me, “South Africans are grief-stricken.”

And yet—and yet. The road I’ve travelled, from a place in the Deep South, where I faced hatred up close and personal, and which only truly recognized my rights as a citizen some fifty-five years ago, when I was nineteen, to my recent conversations with people all over this country who’ve been working on and have found solutions to racism, causes me to live in hope. I believe that, once again, we shall overcome—and, in doing so, remain the inspiration the world has come to expect and depend on.