Donald Trump’s victory in the US presidential election means an uncertain future for Africa.

His rival Hillary Clinton won the popular vote by a landslide – at least among those in Barack Obama’s ancestral village in western Kenya.

The mock poll in Kogelo gave Mr Trump just a quarter of the votes in a place he might not have heard of, were it not for his accusations that it was the outgoing president’s birthplace.

“The people of Kogelo are very much annoyed,” said one resident.

“Being a woman of great substance and Donald Trump being a reality show personality… Clinton should have won,” said one another.

But they would say that – President-elect Trump won’t get anything like the reception President Obama received last year when he came to Kenya.

He had strong connections here – his father was Kenyan – and he launched his Power Africa project, which aims to double the number of people with electricity across the continent.

President George W Bush brought the continent the President’s Emergency Plan for Aids Relief (Pepfar) – which provided millions of people with the drugs to help them fight HIV.

The US spends billions in Africa through aid and investment, but there is uncertainty over what Mr Trump will do, or even how much he knows about the continent.

“Trump has said very little about Africa – I don’t think he knows much about Africa,” said Jakkie Cilliers, chairman of the Institute of Security Studies (ISS), a think tank in South Africa.

“It is just not on his radar – it seems like he will be an insular president focused on US interests – in some sense, isolationist.”

He questioned what it might mean for Pepfar or the African Growth and Opportunities Act (known as Agoa – a hugely valuable American free trade deal with African countries), and efforts to tackle malaria.

“The fact he doesn’t know that much is perhaps our best protection,” said Mr Cilliers, only half joking.

The other key pillar of America’s involvement in Africa is security.

The US military footprint has slowly and secretly been spreading across the continent in reaction to radical Islamist militants.

There are drone bases and special forces troops watching, and acting against so-called Islamic State and al-Qaeda linked groups across the continent.

The key things that need to be in the new President Trump’s Africa in-box include:

How America manages its approach to Africa could have a major impact on stability across the continent.

“Obama has done the US proud with his strategic approach,” said Mr Cilliers.

The ISS put out what he called a “tongue-in-cheek” article a day before the vote, asking what would a Trump presidency would mean for Africa.

“About a third of American foreign aid is directed at health programmes, and much of that at Africa,” ISS researcher Zachary Donnenfeld wrote.

“This means that any reduction in American foreign aid will have far-reaching effects on health outcomes on the continent.

“If Donald Trump were elected and implemented the foreign policy he campaigned on, he could become the single most-effective recruiting tool for terrorist organisations across the globe,” he added.

But with a shift from aid to investment, isn’t a businessman a good man to have at the helm?

“We have investments in US dollars and the first direct impact is the markets tank and that’s a worry from a business perspective,” he said.

“The rhetoric we have heard, the hard-line stance, the America first nationalism, the volatile and lose language makes everyone who is not white and American wonder where they stand.”

Some will welcome his conservative values on homosexuality and abortion, but there is a lot of uncertainty over what President Trump will mean to Africa.

Elected with little by way of policy, the continent will have to wait and see how much of what he said on the campaign trail will translate into action. 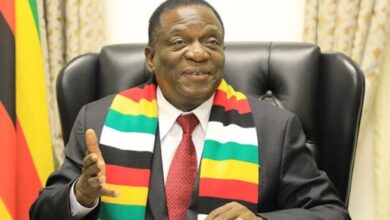