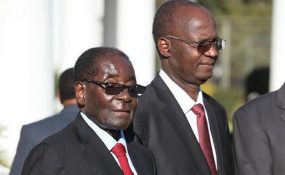 AN ANGRY President Robert Mugabe has ordered an investigation into a complaint by Higher Education minister Professor Jonathan Moyo that the Zimbabwe Anti-Corruption Commission (Zacc)’s investigation of his ministry is “factional and malicious”.

The Tsholotsho North MP has named Vice-President Emmerson Mnangagwa and Zacc commissioner Goodson Nguni as the drivers of a plot to arrest him on charges of criminal abuse of office — the latest in an intensifying Zanu PF battle to succeed Mugabe, who is 92.

Ten Zacc officers stormed the Zanu PF headquarters on Wednesday intending to arrest Moyo while the Zanu PF politburo was in session. They were armed with a charge sheet, accusing Moyo of conspiring with officials in his office to steal $270 000 which was used to finance Zanu PF programmes outside Zimdef’s mandate.

Mnangagwa is linked to the Lacoste faction which is increasingly impatient to see the back of the veteran leader, while Moyo is the chief antagonist in the G40 faction, which wants Mugabe to stay on to frustrate the VP’s ambitions for higher office.

The Standard has learnt that Mugabe was furious after learning of the Zacc officers’ presence and ordered Home Affairs minister Ignatius Chombo and his State Security counterpart Kembo Mohadi to go and tell them that Moyo would not be arrested.

Mugabe also set up a committee chaired by Jacob Mudenda, whose other members are Sydney Sekeramayi, Sithembiso Nyoni and Kembo Mohadi to investigate Moyo’s claims that Zacc was highly politicised and doing the bidding of Mnangagwa’s faction.

The Zanu PF leader said the spilling of the party’s funding secrets was hugely embarrassing.

Moyo, this newspaper is reliably informed, was given an opportunity to address the allegations against him by Mugabe as shocked colleagues listened. During an intense two-hour long discussion, Moyo accused Mnangagwa of being a tribalist and fabricating charges against him for factional reasons.

Earlier, on Monday October 3, Mnangagwa had allegedly convened a meeting attended by three Zacc commissioners — Job Wabhira, Nanette Silukhuni and Denford Chirindo — who were joined by Nelson Mutsonziwa of the National Prosecuting Authority. On the agenda was the arrest of Moyo, which Mnangagwa claimed had been cleared by Mugabe.

Zacc invited Moyo for a meeting on Tuesday where they were to arrest the minister, but Vice-President Phelekezela Mphoko — who was acting president — is said to have stopped Moyo from going.

Later, when Mugabe returned from a trip to Lesotho, Mphoko asked him if he had authorised Moyo’s arrest, which Mugabe denied as Mnangagwa sheepishly tried to defend his actions.

Official sources say Mugabe told his deputies that the matter would be on the agenda for the politburo the following day.

But on Wednesday, Zacc officers had stormed Moyo’s home, his office and they believed they had him cornered at the Zanu PF HQ.

Moyo, described as emotional during his politburo presentation, said he was the only minister in history to have been charged with corruption for extending financial support to the youth league, the war veterans and the First Lady.

He revealed several instances where ministers had directed parastatals to assist in Zanu PF programmes, including the commandeering of Zupco buses and National Railways of Zimbabwe trains.

Moyo, sources said, revealed how the Million Man March in July had been financed by Zimdef. AB Communications, a company owned by Information Technology minister Supa Mandiwanzira, allegedly received $181 000 for advertising and publicity, live streaming, stage, large screens and sundries for the event — said to be the biggest ever rally in Zimbabwe’s history.

To stunned silence, sources say Moyo queried why Zacc had not pursued Mandiwanzira or his company, before sharing his hunch — that it’s because Mandiwanzira is a member of the Lacoste faction.

Zicosu — a students’ union linked to Mnangagwa — had also received some $75 000, Moyo charged, but Zacc had not shown an appetite for investigating them.

On the charge that he had taken $24 000 from Zimdef to finance his daughter’s burial last year, Moyo told the politburo that the money had been paid back even before Zacc began their investigation. He had assumed it was compassionate assistance and was angry when Zimdef officials later told him it was a loan because he had never asked for it, sources said.

Moyo, The Standard heard, warned that targeting a minister for supporting Zanu PF programmes was a serious miscalculation by Mnangagwa that would come back to haunt the party.

Mugabe then ruled that the party committee should shadow Zacc and review all its investigations to date — although it is unclear how any action can be taken against a constitutional body whose members cannot be easily removed.

Nguni, in particular, will become the central focus of the probe. He has clashed with Moyo before.

The convicted fraudster, who fled South Africa in 1999, chairs the investigations committee of Zacc. It is alleged he overturned two Zacc investigations that cleared Zimdef and told investigators that Moyo should be arrested.

According to Mandizvidza, in a sworn affidavit presented in court, Nguni joined the investigation at the operational level and even went to Zimdef offices, demanding documents against procedure.

The unprecedented moves against Moyo, sources say, have hardened feelings in both factions which have now drifted even further apart.

Moyo and Mnangagwa were not answering calls yesterday. On Twitter, Moyo ranted against what he called “infidels” telling “cruel lies to justify a corrupt power grab”.