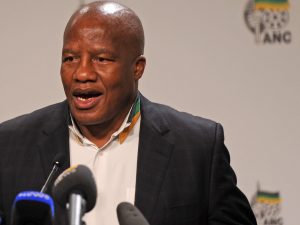 Jackson Mthembu criticized the party’s factional infighting, which he said has been displayed in the politically-motivated charges laid against Finance Minister Pravin Gordhan.

South African authorities have charged Gordhan with fraud during his time as head of the country’s tax agency. But the legal battle has been interpreted as a power struggle between Zuma and Gordhan—the latter has distanced himself from Zuma’s business allies since taking office, including the Guptas, a wealthy family at the center of a probe into whether they have undue political influence.

“When I said the entire ANC leadership that has already taken collective responsibility must take the fall, I meant everybody, myself included, including President Zuma,” Mthembu told South Africa’s eNCA television Sunday.

Mthembu said that the use of “state instruments” to pursue Gordhan meant that the ANC was comparable to the apartheid state. Apartheid was a system of racial segregation that the ANC ended in 1994 when Nelson Mandela was elected president.

“He [Gordhan] is pursued in a manner that is anti-democracy and anti-ANC, and some of us will stand against it,” said Mthembu, South Africa’sCity Press reported. “We are not only equal to the apartheid state, we are worse—because they never treated their ministers like this.”

Gordhan has received the support of senior ANC figures, including South Africa’s Deputy President Cyril Ramaphosa, in his legal battle.

The ANC suffered its worst election result since the end of apartheid in 1994 in August’s local government vote. The party lost control of key urban areas, including the commercial hub Johannesburg and the administrative capital Pretoria.

Zuma has faced a series of personal scandals recently, including the country’s top court finding that he had failed to uphold the constitution by misusing state funds to improve his home in Nkandla, in the eastern KwaZulu-Natal province.