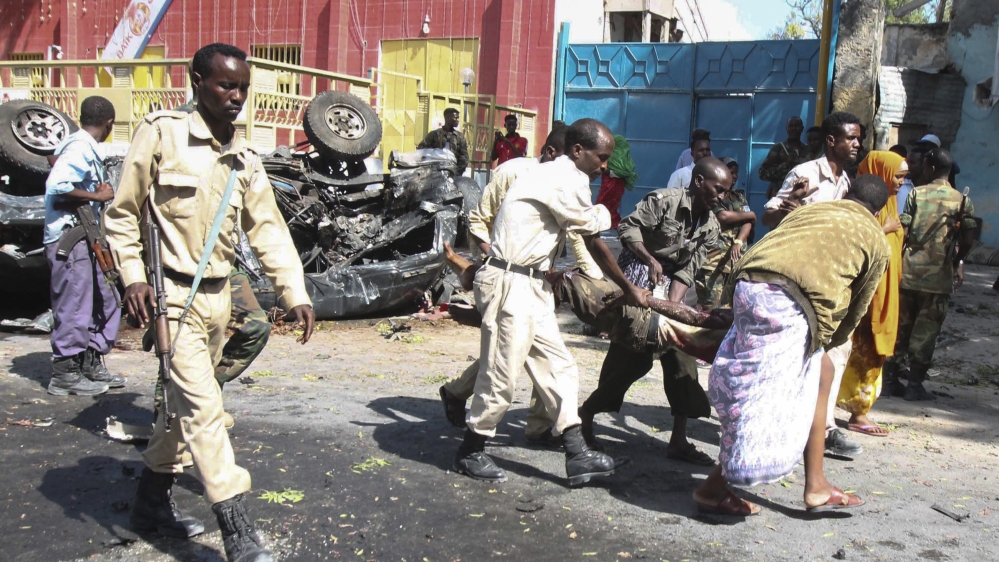 At least two people have been killed and five others injured after a car loaded with explosives blew up near a restaurant in Mogadishu, according to security official and witnesses.

The car was parked in front of the Blue Sky restaurant, near a busy road close to the headquarters of the Somali National Intelligence and Security Agency (NISA) in a southern district of Mogadishu.

Blue Sky is located near a detention centre, known as Jilaow, where captured fighters are often held in underground cells.

The blast was detonated remotely outside the restaurant, Mohamed Dahir, a security forces spokesman, told AFP news agency, adding that “information we have got so far indicates that two civilians were killed in the blast”.

Sources said the restaurant is frequented both by security personnel and civilians.

“We targeted the security forces and officers of the underground Jilaow cell who were there,” Sheikh Abdiasis Abu Musab, al-Shabab’s military operations spokesman, told Reuters.

He claimed at least 10 people were killed, but did not say whether a suicide car bomb was used in the attack, although al-Shabab often uses such tactics.

Reuters quoted Abdifatah Omar, a spokesman for Mogadishu’s local government, as saying at the scene of the attack that three people had been confirmed dead so far and four others were injured.

Casualty figures given by al-Shabab and Somali officials often differ.

Al-Shabab fighters have claimed responsibility for several recent explosions in Mogadishu, including a car bombing that killed a prominent Somali general and several of his bodyguards.

Somalia is due to hold a delayed presidential election on October 30 as the country targets a long-awaited return to stability.

Despite being driven out of the capital in 2011 by an African Union force deployed in 2007, al-Shabab still controls vast expanses of outlying rural areas from which they launch guerrilla operations.