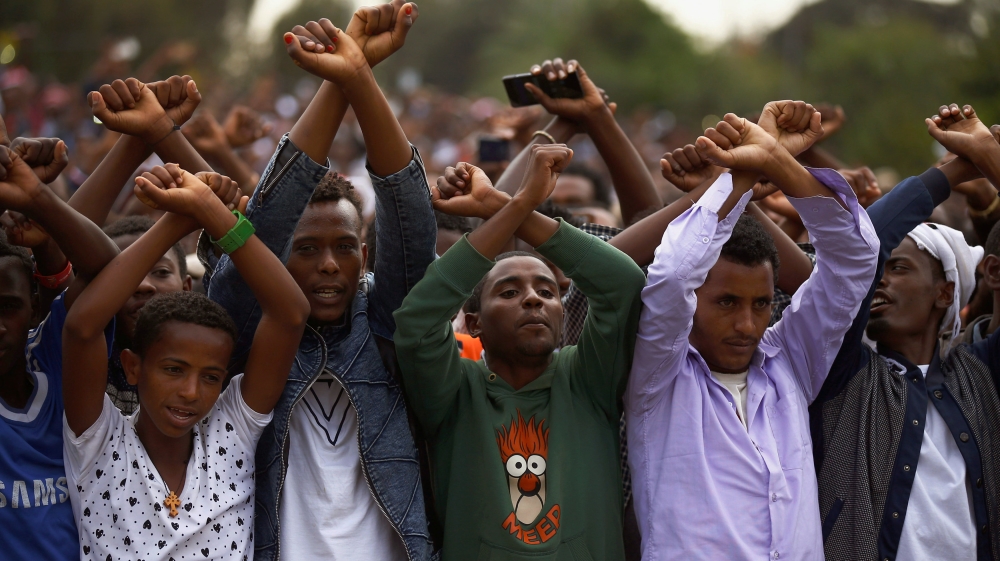 Ethiopian police have arrested a blogger who criticised the government, especially its handling of the ongoing protests in the Oromia and Amhara regions.

Seyoum Teshome, an outspoken university lecturer who has been quoted frequently by foreign media outlets about the anti-government protests, was detained on October 1 at his home in Woliso town in the Oromia region.

Ethiopia’s government spokesman, Getachew Reda, told The Associated Press news agency on Tuesday that he had heard about Seyoum’s arrest and is investigating the reasons why.

Days before his arrest, Seyoum told the AP that he was planning to start his doctoral studies at Addis Ababa University and was starting his own blogging website, Ethiothinkthank. He wrote about Ethiopia’s anti-government protests on his blogging site and Facebook page.

“This arrest of a prominent writer and commentator is deeply disturbing as it comes against a backdrop of government moves to stifle protests and criticism,” said Robert Mahoney, deputy director of the New York-based Committee to Protect Journalists. “Seyoum Teshome should be released without delay and without condition.”

The arrest came a day before dozens of people were killed in the Oromia region.

They were crushed in a stampede after government forces fired tear gas and bullets to disperse protesters during the annual Irreecha thanksgiving celebration of the Oromo people.

The government has said that 55 people died, but online activists and opposition groups outside Ethiopia claim the death toll is much higher.

The incident has sparked renewed protests in many towns across Oromia, where over the past year anti-government protests have called for respect for human rights, wider freedoms and the release of detained opposition figures and journalists.

WATCH: What is triggering Ethiopia’s unrest?

Witnesses said that many people were crushed to death and others fell into ditches as they tried desperately to escape police. Shoes and clothing littered the scene of the disaster as a small group of angry residents dug for bodies in a deep ditch.

On Monday, Human Rights Watch called for an independent investigation and said the government should “end the use of deadly force to quell largely peaceful protests that began nearly a year ago”.

Protests started among the Oromo – Ethiopia’s biggest ethnic group – in November. They later spread to the Amhara, the second-most largest in the country.

Both groups say a ruling multi-ethnic coalition is dominated by the Tigray ethnic group, which makes up about six percent of the population.