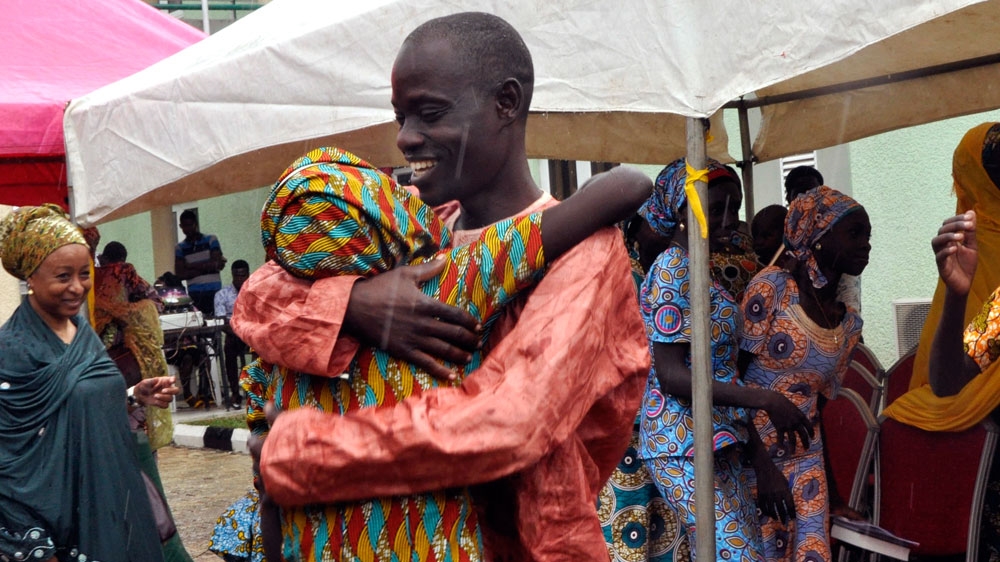 Some of the 21 Nigerian schoolgirls abducted by the armed group Boko Haram have reunited with their families, following their release after 30 months in captivity.

Cries of joy filled the room as the freed girls, who had been kidnapped along with more than 200 other pupils in the town of Chibok in April 2014, met their relatives in Abuja on Sunday.

The girls were freed on Thursday, but it took days for most of the families to reach the capital for the reunion.

At the meeting, the parents of one of the girls spoke of their excitement at seeing their daughter.

“When we heard they found some of the girls, and that our daughter was among them, we slept as if the day is not going to break,” Muta Abana, a father of one of the Chibok girls, told The Associated Press news agency.

“We wanted the day to break quickly, to see if the government is going to call us, to come and see that our daughter was among them.”

Hawa Abana, the mother, said that Boko Haram abducted her daughter and hundreds of other schoolgirls, because “they did not want them to succeed in life”.

“By God’s grace she is back,” she said. “She will go back to school. Boko Haram has no power again.”

Eleanor Nwadinobi, women and girls manager at the Nigeria Stability and Recognition Programme, said the girls will now undergo treatment which must be tailored to individual needs, including trauma counselling and health and nutritional requirements.

“It is important that they are not attended to in isolation,” she told Al Jazeera.

“They will need individual attention as the needs of one girl will differ from the other.”

Also on Sunday, a presidential spokesman said a splinter branch of Boko Haram is now willing to negotiate the release of 83 more of the girls.

“The faction said it is ready to negotiate if the government is willing to sit down with them,” Garba Shehu, spokesman for President Muhammadu Buhari, told Reuters news agency.

Boko Haram seized 276 pupils from the Government Girls Secondary School in Chibok in northeastern Borno state on April 14, 2014. Fifty-seven managed to escape in the immediate aftermath of the abduction, but nearly 200 other girls are still missing.

The deal for the release of the girls was brokered by the Swiss government and the International Committee of the Red Cross.

Following their release, they were then taken from the northeastern city of Maiduguri and flown to Abuja to meet state officials.

On Thursday, Lai Mohammed, Nigeria’s information minister, denied reports that the state had swapped captured Boko Haram fighters for the release of the girls.

He also said that he was not aware of any ransom being paid.

Mohammed said that a Nigerian army operation against Boko Haram would continue.

In recent days, the Nigerian army has been carrying out an offensive in the Sambisa forest, a stronghold of Boko Haram.

The armed group controlled a swath of land around the size of Belgium at the start of 2015, but Nigeria’s army has recaptured most of the territory.

The group still stages suicide bombings in the northeast, as well as in neighbouring Niger and Cameroon.