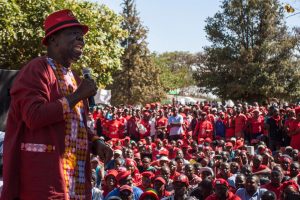 Zimbabwe is at a crossroads. The country is facing a multifaceted political and economic crisis, stemming largely from a lack of political legitimacy that has arisen out of persistently disputed elections since the country achieved its independence from Great Britain in 1980.

Today, the crisis has escalated massively since the last disputed election in 2013. The central bank is printing $75 million worth of bond notes, a pseudo-currency that is being rejected by the people; cash withdrawals are being limited by banks; and people from all walks of society are taking to the streets to protest the dire economic conditions. Add to that a 92-year-old president who has been in office for 36 years, and our country has all the elements of a political catastrophe.

We now have a government that is failing to raise wages for its workers, let alone find funds for other critical national infrastructure, like health care and education. As of now the main health referral centre, Harare Central Hospital, has closed some of itsemergency units for lack of funding. The governing party, Zanu PF, has become so clueless that the only consistent element about them is policy inconsistency.

Zimbabwe could be the only country where a president who reads a wrong speech in parliament for an hour and where a finance minister announces a mid-term fiscal policy review that is publicly dismissed by the minister of information just days later as a false position of government. And in both cases, no action was taken against anyone.

The encouraging news is that we in the opposition Movement for Democratic Change (MDC) have now been joined by the majority of the citizens of our country, who have united to put pressure on this regime.

Since April 14, when the MDC led a public demonstration against the government attended by thousands, civic groups and ordinary citizens have felt emboldened and there has been a rise in public citizen expression against misgovernance, as seen in the #ThisFlag movement . In short, Zimbabweans have overcome the ghost of fear and that is encouraging.

Added to that is the national convergence of diverse players working together to make things right for the country. Opposition political parties, civic society, ordinary citizens and even former liberation war fighters once aligned to Zanu PF are now all speaking the same language. The national chorus is that President Robert Mugabe must go and give the country some respite.

There is overwhelming convergence against this regime. The people’s public demonstrations have not been about ousting anyone from power, but simply legitimate expressions by citizens crying out to be heard by their own government. The sad news is that the government has seen these legitimate and constitutional public demonstrations as a threat to its hegemony. Mugabe’s government has responded by doing what it knows best: brutality as a means of power retention at all costs.

All public demonstrations have now been banned, even though the constitution allows them. The government has in essence effected a state-of-emergency through the back door.

Despite the brutality and bans of legitimate public expressions, the people of Zimbabwe will continue to put pressure on this government. The response so far shows that the protests have been effective. The people have now summoned the courage to loudly make their point, in stark contrast to the time when citizens lived in fear of expressing themselves. The people have broken the siege.

On our part as the MDC, we have tabled a roadmap with four signposts to legitimacy, which we believe is the only sustainable path towards growth, stability and recovery.

President Mugabe can rant and rave that he was elected in a free and fair election and therefore has a legitimate mandate to govern the country. The grim reality, however, is that, given his age and his crimes of omission and commission—from failing to develop cogent policies to meting out brutality against the Zimbabwean people—he must set the stage for national recovery. For the sake of his legacy, he needs to send out a message that the country is more important than individuals. All signs point to Mugabe wanting to die in office , but he must retire and set the stage for a new course for the country. If he truly loves this country, his departure will be the first positive sign to set the country on a new trajectory for recovery and growth.

After that departure, there must be convergence and dialogue by multiple stakeholders that go beyond just political parties.That dialogue will be centered on the mechanics of the creation of a National Transitional Authority with a very specific and limited tenure and mandate.

In our view, the National Transitional Authority will not run government but will have the executive authority to put in place reforms that will precede a truly free and fair election. With its limited mandate and tenure, this diverse body must be obligated with the responsibility of steering the country towards a credible vote that will yield a legitimate government with the confidence of Zimbabweans, the region and the broader international community.

The fourth and last signpost of our roadmap is the conduct of a truly free and fair election. This will put in place a legitimate government that can inspire confidence locally, regionally and internationally.

We are confident that we are in the last mile of our struggle. Business, labor, women and even the old have continued to retain their faith that stability and progress can be achieved in our country.

The message from the people of Zimbabwe to the region and the international community is that we have reached the tipping point. The message is that we cannot walk this last mile alone, without the warmth, empathy and solidarity of the region, Africa and the broader global community. Zimbabwe needs the support of the world and they expect a universal condemnation of this naked brutality against them by their own government for daring to express themselves.

I have no doubt in my mind that Zimbabwe is on the verge of a new era.

*Newsweek.Morgan Tsvangirai is a former prime minister of Zimbabwe and leader of the opposition Movement for Democratic Change