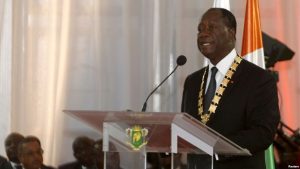 Ivory Coast voters will decide this month whether to soften a nationality clause that helped trigger a decade-long political crisis, a draft of a new constitution showed Monday.

President Alassane Ouattara promised during his campaign for re-election last year to change the language of an article in the constitution which states the parents of presidential candidates must both be natural-born Ivorians.

Ivorian nationality was at the heart of a crisis that began with a 1999 coup and included a 2002-2003 civil war that split the country in two for eight years.

The proposed revision to the constitution, seen by Reuters and due to be presented to parliament on Wednesday, means only one parent must now be “Ivorian by origin,” a term that excludes naturalized citizens.

Ouattara, a northerner, was repeatedly barred from seeking the presidency because of what opponents said were his foreign origins.

He finally won election in 2010, although his victory sparked a second brief war that killed more than 3,000 people.

The new constitution, which will go to a public referendum Oct. 30, also removes an age limit of 75 for presidential candidates.

All three of Ivory Coast’s main political figures — Ouattara and former presidents Laurent Gbagbo and Henri Konan Bedie — will be older than 75 in 2020, when the next elections are due.

New language also makes it easier to change the constitution.

It lowers the number of votes required for revisions submitted directly for approval by parliament to two-thirds of MPs from four-fifths, and removes a clause requiring a public referendum for any changes to presidential mandates.

Other major changes include creating a post of vice president and a Senate.

Currently, the speaker of parliament is second in line to the president, but the constitution states that new elections must be organized within 90 days, a time frame critics say is unworkable.

Under the new charter, the vice president would finish the mandate if the president died or was incapacitated while in office.

The creation of the Senate, which together with the existing National Assembly will make up a two-chamber Congress, marks an expansion of the president’s influence over the legislative branch of government.

A third of senators will be appointed by the president. The remaining two-thirds will be chosen in an indirect election process, details of which must be worked out in a separate law.

Ivory Coast’s opposition has criticized the drafting process for the new constitution, claiming it lacked transparency. It had called a sit-in in front of parliament on Wednesday, when Ouattara will put the changes to lawmakers, but municipal authorities said the demonstration was not authorized.