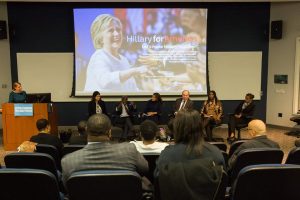 Restive Africans are getting assurances that it will not be business as usual with the continent, should democratic candidate Hillary Clinton succeed President Barack Obama as the next U.S President.

At a recent meeting organized by the Africa Coalition for Hillary at The Elliott School of International Studies at George Washington University in Washington, DC, Senior policy advisers indicated that as President, Hillary Clinton will build and expand on successes and programs initiated by the Obama Administration while seeking to expand areas of cooperation.

Amb. Michelle Gavin, former U.S. Ambassador to Botswana and Representative to the Southern Africa Development Community (SADC), Former Special Assistant to President Obama and Former Senior Director for Africa at the NSC who  advises HFA on African Affairs; Nicole Wilett–Jensen, former NSC Director for African Affairs and who advises HFA on African Affairs; Witney Schneidman, Former Deputy Assistant Secretary of State for African Affairs; Amb. Robin Sanders, CEO, FEEEDS, Former U.S. Ambassador to Nigeria and Congo; Amb. Omar Arouna, Former Ambassador of Benin to the U.S., Co-Chair of the African Coalition for Hillary and Ms. Semhar Araia, a diaspora women White House Champion and CEO, Semai Consulting, engaged the audience of some 100 people in a spirited exchange on the stakes for Africa in the upcoming elections and why the African Diaspora must throw its weight behind Clinton.

“This event serves as a platform to inform and educate the diaspora on Sec. Clinton’s record on Africa, propose new policies and encourage Africans to get out the vote,” said Angelle Kwemo, a Cameroonian born policy advocate, CEO of Believe in Africa, and Co-Chair of Executive Women for Hillary (DMV) and founder of the African Coalition for Hillary.

“We live in a democracy – that obviously and unfortunately can produce candidates with divisive views-, and we need to play our part. At the end of the day, if Africans are not at the table, we will surely be on the menu,” Angelle Kwemo said in weighing the stakes for Africa. 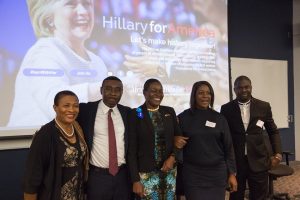 Discussions were anchored around the results of a survey carried out by Believe in Africa, a diaspora organization Kwemo launched in 2014 to promote African solutions to African problems, on African priorities for the next U.S. Administration. The survey ranked democracy, trade and development, job creation, youth and women empowerment as the top areas Africans will love to see more engagement in.

Summing up some of the successes registered by the Obama Administration, Amb Michelle Gavin who planned the first White House African diaspora meeting, and Wilett–Jensen cited the Commerce Department Doing Business in Africa (DBIA), the Young African Leaders Initiative (YALI),the African Women Entrepreneurship Program (AWEP) ,Feed the Future, Power Africa and other successful initiatives that the next administration could build on.

Participants agreed on the need for the next U.S Administration to work with African leaders in building structures that will facilitate orderly transfer of power through credible electoral processes which will see the emergence of leaders with a healthy dose of legitimacy. In doing so, the U.S must avoid a one-policy-fit -all solution , Ambassador Omar Arouna cautioned. Arouna opined that engagement of the U.S. with Africa on promoting peace and democracy could be more effective with a country specific approach that takes into consideration existing realities.

On combatting corruption, African countries will need to do their part by building strong institutions and strengthening the rule of law said Witney Schneidman. Amb Sanders indicated that Hillary’s campaign was aware of the need to include the African Diaspora and small and medium size to participate in future high profile forums like the US-Africa leaders’ Summit. 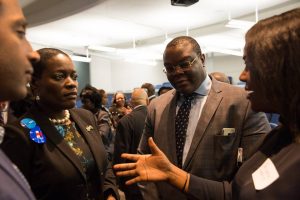 Steve Lande, from Manchester Trade went a step further by calling for the U.S. Chamber of Commerce and the Corporate Council on Africa to have African diaspora and SME initiatives. The Panel agreed that the African Growth and Opportunities Act (AGOA) regime started by Bill Clinton needs to be uplifted while individual African beneficiary countries need to define their own AGOA strategy to effectively take advantage of the program.

Lande noted that the AGOA policy should enable beneficiary countries to leverage their agricultural potentials and be able to export agricultural products in the U.S. market.  AGOA at this point mainly supports the U.S, textile industry. Lande noted that a new initiative needs to be launched to accelerate African regional integration, currently undermined by European Union Economic Partnership Agreements. He also expounded on the role of manufacturing in the growth of African economy, urging the incoming administration of Secretary Clinton to enhance AGOA to include an investment fund that would extend capital investments to small and medium enterprises, a critical barrier to full realization of the good intentions embedded in the initiative. 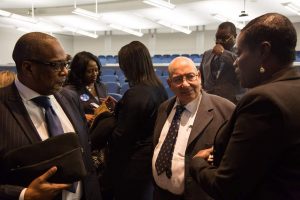 Africans attending the meeting expressed their appreciation to the African Coalition For Hillary for offering a platform to facilitate dialogue with Africans. Agnes Nabasirye, a diaspora member from Uganda, recognized the role of the coalition in bringing Africans in the diaspora together, on African issues. She mentioned that there was an expressed interest among Africans present to proactively seek input from African minds and leaders to add the voice of the diaspora to  formulating US policy on Africa .

In closing remarks, Angelle Kwemo invited the community to exercise their right and be responsible citizens. “We cannot stay on side line and expect the new administration to respond to our need”. “Hillary Clinton record shows that she is with Africa. We need to help her get elected, help her shape a new Africa policy and hold her accountable,” Kwemo said. 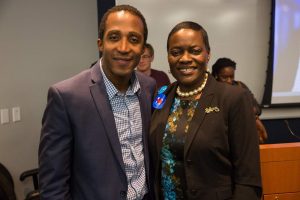