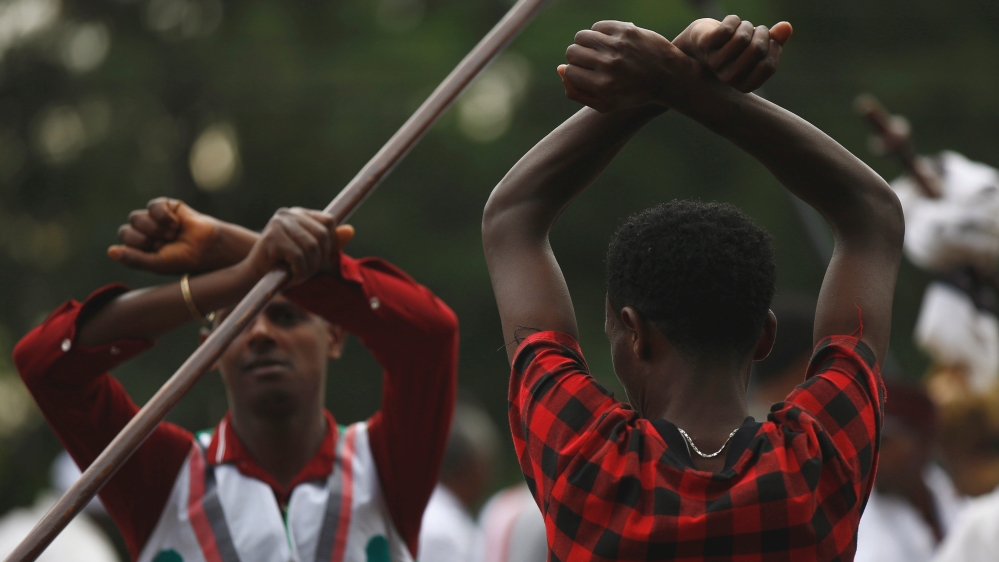 Demonstrators have clashed with police in central Ethiopia a day after a deadly stampede at a religious festival that started when police fired tear gas and warning shots.

Protesters blocked roads in several towns in the Oromia region on Monday as the Ethiopian government declared three days of mourning to ease tensions in the region after at least 52 people were killed in Sunday’s chaos.

INSIDE STORY: What is triggering Ethiopia’s unrest?

Witnesses said many people were crushed and others fell into ditches as they tried desperately to escape the police. Shoes and clothing littered the scene of the disaster as a small group of angry residents dug for bodies in a deep ditch.

“We’re digging because people are buried inside the ditch. Fifty-two dead is a lie,” Dagafa Dame, one of the diggers, told AFP news agency.

Oromo activists called for “five days of rage” after the stampede.

Clashes between security forces and protesters continued on Monday morning in Bishoftu and Ambo, an Ethiopian government official and witnesses told The Associated Press.

“Some people tried to come out en masse this morning to protest the deaths of holiday-goers on Sunday and also demand the release of people arrested during the celebrations,” said Nimona Negash, a tuk-tuk driver in Bishoftu, where the disaster occurred.

“Today’s protesters were peaceful but dispersed by police violently.”

Negash said family members of people who died in Sunday’s stampede and others looking for their loved ones were flocking to Bishoftu, 45km south of the capital Addis Ababa, creating tension there.

“I went to the place where the accident happened this morning, and I’ve seen people being pulled out,” he said. “More and more people are coming out of a deep ditch. I saw seven bodies being pulled out, then left the scene as I was unable to watch more.”

‘Not out of control’

Fikadu Tessema, a spokesman for the Oromia region, said on Monday some groups were trying to “continue the violence that they orchestrated on Sunday”.

He said they were trying to blame the deaths on security forces who fired live rounds. “I can assure you 100 percent that all the 52 victims died of a stampede and didn’t have bullet wounds on their bodies,” he said.

“The current situation in Oromia is not out of control. We are taking measures to bring back our peace.”

Oromia has experienced violent, sometimes deadly anti-government protests since November 2015 as people have called for wider political freedoms and the release of detained opposition figures and journalists.

Ethiopia’s government, a close ally of the West, has often been accused of silencing dissent and at times blocking internet access.

The US recently spoke out against what it called the excessive use of force against protesters, calling the country’s situation “extremely serious”.