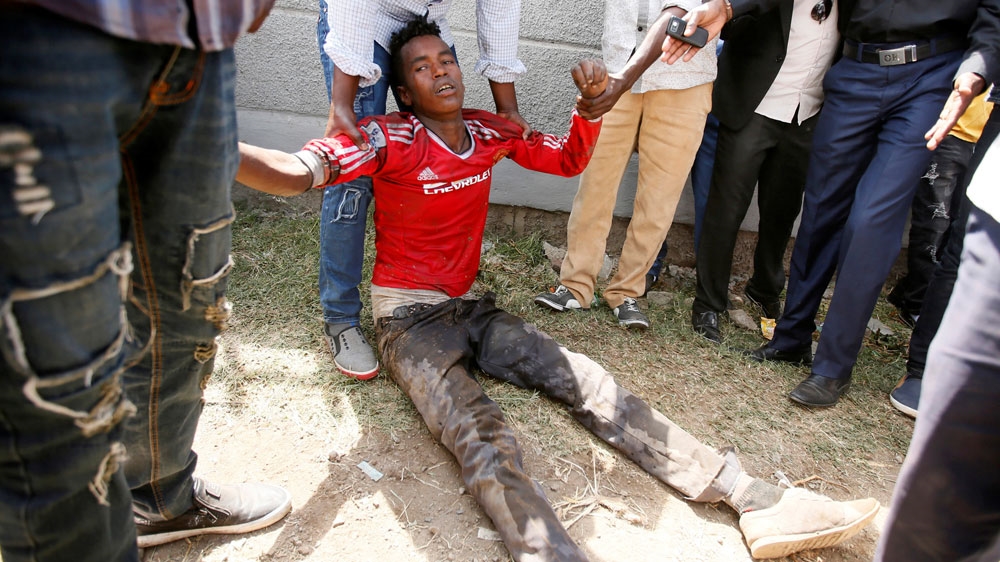 Scores of people have been reportedly crushed to death in Ethiopia in a stampede after police fired tear gas and rubber bullets to disperse an anti-government protest that grew out of a religious festival.

There were conflicting death toll reports following Sunday’s stampede in Bishoftu, a town 40km southeast of the capital Addis Ababa.

An AFP news agency photographer at the scene said he saw 15-20 unmoving bodies, some of whom were clearly dead.

“As a result of the chaos, lives were lost and several of the injured were taken to hospital,” the government communications office said in a statement, without giving exact figures.

“Those responsible will face justice.”

An estimated two million people were attending the annual Irrecha event in Bishoftu.

The event took place in one of the country’s most sensitive regions, Oromia, which has seen several months of sometimes deadly protests demanding wider freedoms.

Merera Gudina, chairperson of the opposition Oromo Federalist Congress, told Reuters news agency at least 50 people were killed when people fled after police fired tear gas and shots in the air to disperse anti-government protesters at a crowded religious festival.

The government and opposition often give different accounts for casualties during protests.

Crowds chanted “we need freedom” and “we need justice” and prevented community elders, deemed close to the government, from delivering their speeches at a religious festival, prompting police to fire tear gas that caused the stampede.

Protesters chanted slogans against the Oromo People’s Democratic Organisation, one of four regional political parties that make up the Ethiopian Peoples’ Revolutionary Democratic Front, which has ruled the nation for quarter of a century.

Sporadic protests have erupted in Oromia region in the last two years, initially sparked by a land row and increasingly turning more broadly against the government.

According to New York-based Human Rights Watch, at least 500 people have been killed by security forces since the demonstrations began in November.

Though protests started among the Oromo – Ethiopia’s biggest ethnic group – they later spread to the Amhara, the second-most largest in the country.

Both groups say the ruling coalition is dominated by the Tigray ethnic group, which makes up only about six percent of the population.

Small protests in Oromia province initially flared in 2014 over a development plan for the capital that would have expanded its boundaries, a move seen as threatening the seizure of farmland.

The government has blamed rebel groups and dissidents abroad for stirring up the protests and provoking violence.

The government has denied that violence from the security forces is systemic, though a spokesman has previously told Al Jazeera that police officers “sometimes take the law into their own hands”, pledging an independent investigation.

The Ethiopian People’s Revolutionary Democratic Front last month rejected a UN request to send in observers, saying it alone was responsible for the security of its citizens.

In Kenya, 3 snapshots of the partnership trickle down