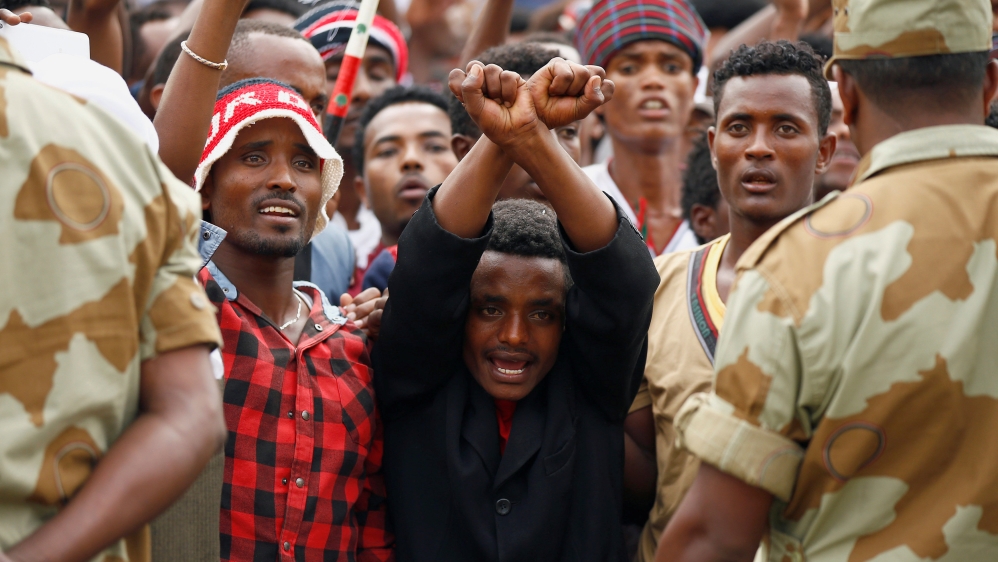 Ethiopia has restricted foreign diplomats’ travel in new provisions of a state of emergency as part of its response to an unprecedented wave of anti-government protests.

New restrictions published in local media state that foreign diplomats are forbidden from travelling more than 40km outside the capital, Addis Ababa, “for their own security”.

“This is a state of emergency and we expect repressive measures,” a Western diplomat told AFP news agency on condition of anonymity on Monday.

“But we also expect an opening of the political space for the opposition as stated by the president in front of the parliament. This is not what seems to be happening,” the diplomat added.

UN Secretary-General Ban Ki-moon is following developments in Ethiopia “with concern”, his spokesman said on Monday.

The UN chief urged Ethiopian authorities to uphold human rights and called for calm and “inclusive dialogue to resolve all grievances”.

The new measures include a 6pm-to-6am curfew around factories, farms and government institutions, which have come under attack from protesters in recent weeks.

They also include a 50km “red zone” adjacent to the country’s borders in which it is illegal to carry firearms. The areas around several key roads have also been declared red zones.

Political parties are “banned from giving press statements that incite violence” and religious leaders are forbidden from making political statements.

Security forces are banned from going on holiday or resigning from their jobs.

The measures also make it illegal to watch television stations set up by the diaspora, such as Ethiopian Satellite Television and the US-based Oromia Media Network.

Posting links from these organisations’ websites on to social media has also been declared a “criminal activity”.

Cellphone internet access has been cut for almost three weeks in most parts of the country, including the capital.

“There is a pressing concern that the Ethiopian authorities will need even less of a pretext to prevent foreign journalists from doing their work during the state of emergency,” said Will Davison, head of the Foreign Press Association, an informal gathering of foreign correspondents in Ethiopia.

READ MORE: ‘I am not seeking asylum in the US,’ says Oromo Olympian

The death toll from unrest and clashes between police and demonstrators over the past year or more runs into several hundred, according to opposition and rights group estimates. At least 500 people have been killed by security forces since anti-government protests began in November, New York-based Human Rights Watch group said in August.

Both groups say that a multi-ethnic ruling coalition and the security forces are dominated by the Tigray ethnic group, which makes up only about 6 percent of the population.

The government, though, blames rebel groups and foreign-based dissidents for stoking the violence.