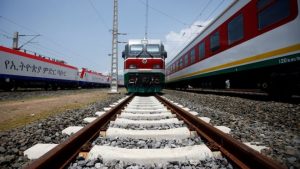 It links Ethiopia’s capital, Addis Ababa, to the Red Sea port of Djibouti – a stretch of more than 750km (466 miles).

Travelling at 120km/h, the new service cuts the journey time down from three days by road to about 12 hours.

The $3.4bn (£2.7bn) project was built with the help of funding from a Chinese bank and will have Chinese staff.

The track runs parallel to the abandoned Ethio-Djibouti railway, built more than 100 years ago.

The passenger trains – which will run each way daily – are to start in three months’ time and ticket prices will be announced nearer the time.

‘It will transform my business’

Getachew Betru, chief executive of Ethiopia Railways, says it will be much cheaper and more reliable than travelling to Djibouti by road.

“In Ethiopia currently if you want to bring your container from Hong Kong to Djibouti it will take you maybe two, three weeks. But it will take you more than that to take it from Djibouti to Addis Ababa. It will now take us one day or more,” he said.

At the opening ceremony on Wednesday, Ethiopian Prime Minister Hailemariam Desalegn said that the rail line would be a boost to the economy.

“It will provide huge benefits to the industrial parks and modern farms that will be built in the future,” he said.

A businessman at the opening told the BBC that the railway “would transform” his trade in transporting livestock.

“It will be easier, more efficient,” he said.

The railway was 70% financed by China’s Exim Bank and built by China Railway Group and China Civil Engineering Construction.

Chinese controllers, technicians and station masters are among those staffing the services for the next five year after which Ethiopians will be employed.

Mr Getachew told the AFP news agency that their local counterparts are in training.

Djibouti is important to landlocked Ethiopia which currently imports and exports nearly 90% of its goods through its port.

The railway is the first step in a vast 5,000km-long network of rail which Ethiopia hopes to build by 2020, connecting it to Kenya, Sudan and South Sudan.

The dream is that one day the railway will extend from Djibouti’s coast all the way across Africa to the Atlantic Ocean. 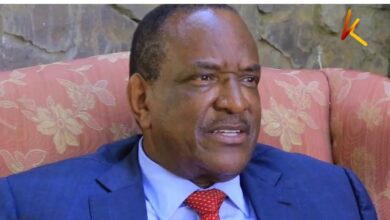