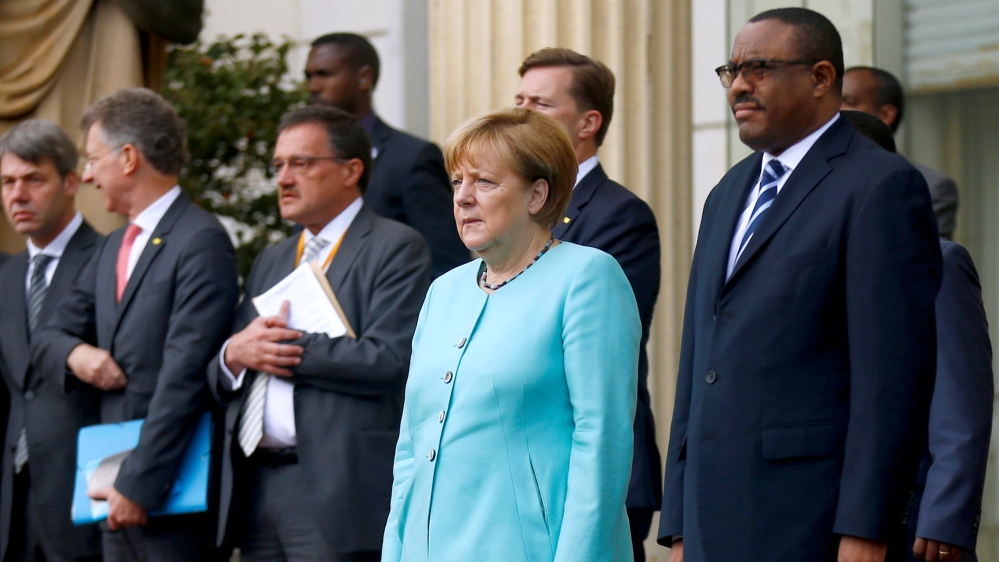 Ethiopian Prime Minister Hailemariam Desalegn said on Tuesday that police had not used extreme violence against protesters and the government would investigate reports of such incidents.

The prime minister spoke during a visit by German Chancellor Angela Merkel on Tuesday, and his remarks came as the country struggled with a wave of anti-government protests in which rights groups and the opposition said security forces had killed hundreds of people during demonstrations.

As protests surged again, Ethiopia on Sunday declared its first state of emergency in 25 years, which state media said would last six months.

Human Rights Watch, a New York-based rights group, has put the death toll at 500, while social media activists and some opposition groups have said it is much higher.

The authorities say such estimates are exaggerated.

“The government is not using extreme violence. If it happened, we will investigate the units involved,” Hailemariam said at a joint news conference with Merkel in the capital Addis Ababa.

Both groups say a multi-ethnic ruling coalition and the security forces are dominated by the Tigray ethnic group, which makes up only about 6 percent of the population.

The government has consistently blamed what it called “anti-peace elements” outside the country for the trouble and, on Monday, it pointed a finger at Eritrea and Egypt.

Merkel said she told the prime minister that protests should be allowed and that any police response should be proportionate. She also said opposition groups should be included in the political process.

“I made the case that you should have open talks with people who have problems,” Merkel said.

Al Jazeera’s Catherine Soi, reporting from neighbouring Kenya, said the government has denied repeated requests by the United Nations and human rights groups to send observers to the country.

“Some say [Merkel] should have asked for more – the release of political prisoners – but others hope it will encourage more world leaders to come out and speak about what is going on,” Soi said. “Many feel it is not receiving enough international attention.”

The demonstrations, which began in November, reignited last week after a stampede at a religious festival, which was sparked by police firing tear gas and warning shots at a huge crowd that had started to shout slogans and make gestures associated with the protests.

The government says 55 people were killed but the opposition says the figure is much higher.

Last week, protesters ransacked or torched about a dozen mostly foreign-owned factories, flower farms and other sites, accusing the government of building on seized land.

“In a democracy there always needs to be an opposition that has a voice – in the best case in parliament,” Merkel added at the news conference.

Opposition parties failed to win a single seat in parliament in the 2015 election, accusing the government of rigging the vote – charges which it denies. There was just one opposition politician in the previous assembly.

Addressing parliament the day before Merkel arrived, Ethiopia’s president called for an amendment to the election law to allow “alternative voices” to be heard – an offer that a senior opposition figure dismissed as “too little, too late”.

In another show of German discontent, a diplomat told the Reuters news agency that Addis Ababa had proposed that Merkel address parliament, but Berlin refused because it lacked any opposition members.

The diplomat, who asked not to be named, said the message being sent was that there was “no business as usual”.

Also on Tuesday, the AFP news agency reported a Somalia official as saying hundreds of Ethiopian troops had been ordered to pull out of a town in central Somalia, at least the second location vacated by their forces in recent weeks.

“The Ethiopian troops pulled out of El-Ali town early this morning,” said security official Abdirisak Moalim Ahmed, adding that the reason for the withdrawal was unclear.

Nearby al-Shabab fighters then reoccupied the town, which lies about 70km from the provincial capital Beledweyne.

“They have headed for Beledweyne and the town is already taken by al-Shabab militants,” he said. “They [the Ethiopian troops] continue creating vacuums and giving chances to the militants to retake liberated towns.”

The troop movements have raised questions about whether it is related to the unrest at home.

El-Ali is at least the second town Ethiopian troops have vacated in recent weeks, having abandoned nearby Moqokori.

No explanation has been given by the Ethiopian military, while the spokesman for the AU Mission in Somalia did not respond to requests for comment, AFP reported.