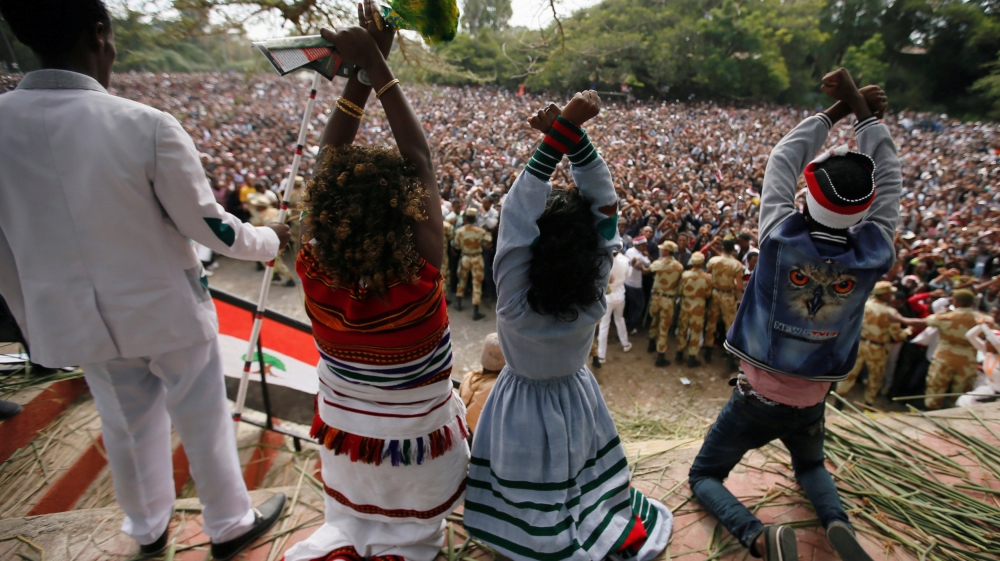 Ethiopia has accused “foreign enemies” of arming, training, and financing groups it blames for a wave of unrest in regions around the capital, Addis Ababa, a day after a six-month state of emergency was imposed.

At a news conference on Monday government spokesman Getachew Reda named Eritrea, which has a long-running border dispute with Ethiopia, and Egypt, which is embroiled in a row with Addis Ababa over sharing Nile water, as sources of backing for “armed gangs”.

“There are countries which are directly involved in arming, financing and training these elements,” said Reda.

Reda said, however, it could be elements who do not have formal government support acting rather than “state actors”.

Ethiopia’s government is facing the biggest challenge of its 25 years in power, with anti-government protests spreading, foreign-owned companies targeted, and a harsh security crackdown that has killed hundreds so far while failing to quell the unrest.

Protesters from the majority Oromo and Amhara ethnic groups say they are marginalised by the minority Tigrayan-led government, which they accuse of monopolising power and controlling the economy.

“The internet in Ethiopia has been blocked for at least the past week and the few people on the ground that we spoke to said the state of emergency is nothing more than to suppress the protests,” Al Jazeera’s Fahmida Miller reported from Mombasa, in neighbouring Kenya.

“[They] are concerned by the possibly heavy hand security forces will use.”

“We know for a fact that the terrorist group OLF has been receiving all kinds of support from Egypt,” said Reda. “Its leaders used to be in Asmara [Eritrea] – now they are in Cairo.”

He said “elements in the Egyptian political establishment” were fomenting rebellion, and seeking to promote “historical rights” over access to the River Nile.

On Sunday, Ethiopia declared a state of emergency following months of violent anti-government protests, especially in the restive Oromia region.

“A state of emergency has been declared because the situation posed a threat against the people of the country,” Ethiopian Prime Minister Hailemariam Desalegn said on state television.

Protests reignited last week in the Oromia region – the main focus of a recent wave of demonstrations – after dozens of people were killed in a stampede on October 2. The deadly crush was sparked by police firing tear gas and warning shots at a huge crowd of protesters attending a religious festival.

The official death toll given by the government was 55, though opposition activists and rights groups said more than 100 people died as they fled security forces, falling into ditches that dotted the area.

Mulatu Gemechu, of the opposition Oromo Federalist Congress, told the Associated Press on Monday that an informal state of emergency has been in place in Ethiopia for some time, during which people have been arbitrarily arrested and killed.

“Declaring a state of emergency at this time in Ethiopia is aimed at legitimising the killings that we have seen in the Oromia region recently,” Mulatu said. “It won’t solve the public’s problems and will only worsen them. What people are looking for is a radical change. The people now want the setting-up of a transitional or caretaker government.”

At least 500 people have been killed by security forces since anti-government protests began in November, New York-based Human Rights Watch said in August.

Demonstrations started among the Oromo, Ethiopia’s biggest ethnic group, and later spread to the Amhara, the second-most populous one.

Though they initially began over land rights, protests later broadened into calls for more political, economic and cultural rights.

Both groups highlight the fact that the ruling coalition and security forces are dominated by the Tigray ethnic group, which makes up only about 6 percent of the population.