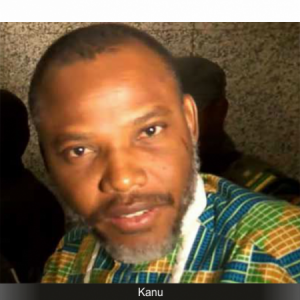 Justice Micah Wright, presiding judge, adjourned the case on Wednesday, October 5, for definite hearing following an application by the defendant.

Wright, however, declined the request for cost by the applicant.

The federal government, who was absent, had written to the court to adjourn the case because the case conflicting case in another court.

But, Ifeanyi Ejiofor, counsel to Kanu, opposed the application for adjournment and requested for a cost of one million naira.

The director of Radio Biafra and leader of the Indigenous People of Biafra had sued the federal government for alleged illegal detention.

Joined in the suit were the attorney-general of the federation and minister of Justice and director-general of Department of State Service, DSS.

Kanu, in the suit, is asking for a compensation of $800 million for the violation of his human rights and an order directing his unconditional release and that of his personal belongings.

He also urged the court to direct the defendants to respect, protect and promote his rights to life, liberty, freedom of movement, assembly and expression.

The plaintiff prayed the court to declare that his arrest and detention since October 14, 2015 by the defendant was in flagrant disobedience to several orders of courts of competent jurisdiction.

He also prayed the court to declare that his continued detention was a violation of the African Charter on Human and Peoples’ Rights, the Universal Declaration of Human Rights the United Nations Charter of 1970. NAN