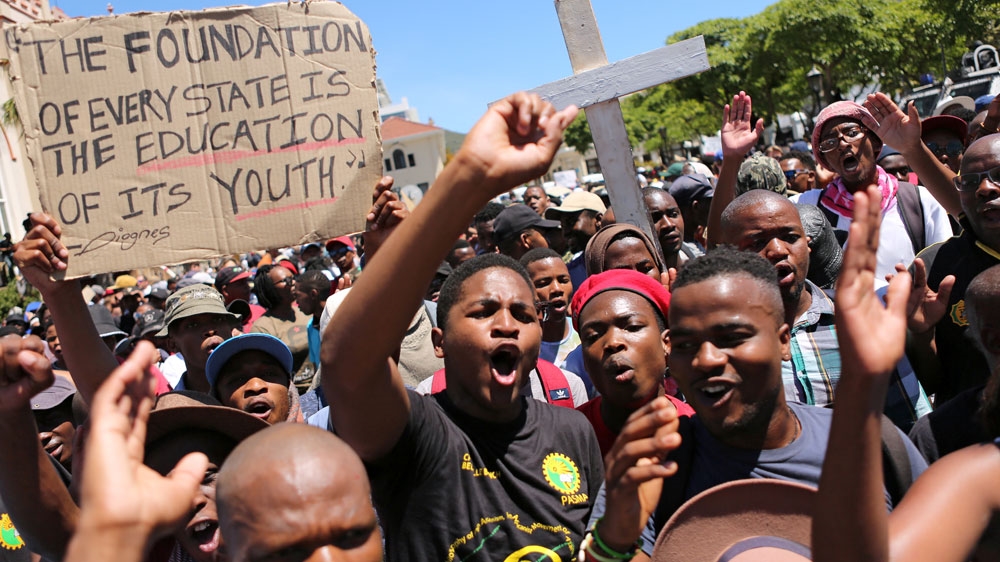 Students in the South African city of Cape Town have clashed with police during protest demanding free education across the country.

Police fired stun grenades, water canons and tear gas as they tried on Wednesday to disperse the large crowd of student protesters.

According to AP news agnecy, students burned a mock wooden coffin for the education minister to show dissatisfaction with the government’s response to their demands.

Al Jazeera’s Haru Mutasa, reporting from Cape Town city centre, said at least one student was injured during the confrontation.

“The students kept coming back. They are refusing to leave. They kept hiding between the shops,” she said.

“They are adamant and they say they want free education even if the government keeps saying it cannot afford to pay.”

Police called on the protesters to leave immediately and return to school “because they are disrupting business”, our correspondent said.

“These are scenes that the government does not want to see in the city of Cape Town. It’s a tourist destination. It’s the last thing they want to see.

“But students are saying, ‘our parents cannot afford the tuition. So how can you expect us to continue [university]?’”

In a speech on Wednesday, Finance Minister Pravin Gordhan promised additional funding for higher education in his speech, while calling for the “violence to stop”.

He promised to cap the tuition fees for 2017.

Many black students say they come from poor families, and fee increases will rob them of the opportunity to continue studying.

South Africa’s economy is struggling. Although it has regained the title of Africa’s largest economy from Nigeria, it could be on the brink of recession. It barely escaped a rating agencies downgrade to junk status recently.

It is rich in mineral resources, but mining production fell 0.2 percent year-on-year in August and farmers are suffering from the worst drought in more than a century.

The International Monetary Fund said corruption in South Africa is holding the economy back.