Cameroon has deployed its navy to seize illegal fishing vessels off the country’s southwestern coast. Tensions have risen there as local communities say foreign trawlers are fishing in protected areas and destroying resources.

“The evidence was clear. These people were catching species that were prohibited within our waters,” he said. “Last night, when the maritime patrol was out there, they actually found more vessels than these ones. Just to tell you that the illegal activities in our waters is just too much and even though we are doing our best to carry out the operation, it is not enough for now.”

Several countries’ coast guards in the region have struggled to respond to the dramatic increase in the number of foreign fishing vessels.

Sone says the majority of the unauthorized fishing operations in his area are Chinese. But other nationalities are also involved, including Nigerians, Ghanians and Kenyans.

Cameroon’s most senior fishery official based in the southwest, Walters Ndi, says some of the Chinese have registered under Cameroonian businesses, but refuse to respect fishing norms.

“For industrial fishing, fishing vessels are not supposed to go beyond three nautical miles from the coastal areas,” he said. “These areas are areas that the artisan fishermen can carry out their normal activities without any conflicts. These are areas for reproduction, so for sustainable management of our fishing resources, industrial fishermen are not supposed to go there because that is where we have the majority of the young fishes. It is from there that they can be able to move to the high seas for proper growth.”

Limbe Association of Fisherwomen President Serah Epoule Kome says the local price of mackerel, a food staple in this area, has doubled.

“If you go to the market now, you will just see small-small fishes. That is all what you will see in the market. You will not see anything good,” said Kome.

Limbe residents told VOA that last week local fishermen beat up a group of foreign fishermen and took their equipment.

“The Chinese people have their nets,” she said. “They will just throw something inside the sea, all the fishes will go inside the nets, even small fishes. They wreck all. But in the morning that my fisher people are going, “Look, you are seeing now?” There is no fish. How can the common man live? ” 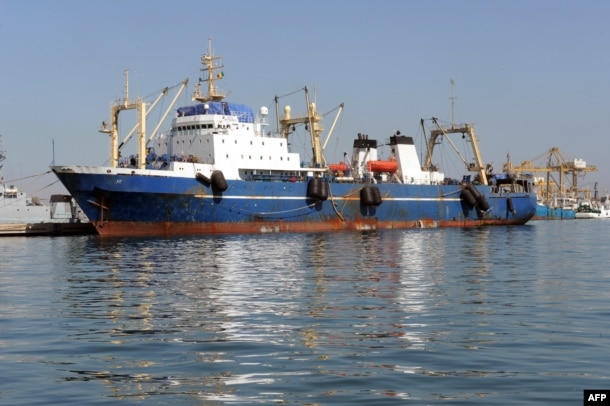 FILE – A Russian trawler “Oleg Naïdenov”, is moored in Dakar on Jan. 5, 2014. The ship was boarded after it was observed illegally fishing in Senegalese waters near the border with Guinea Bissau.

In a report released earlier this year, the Overseas Development Instituteidentified the western coast of Africa as the global “epicenter” of illegal, unreported and unregulated fishing. Local communities are paying the price.