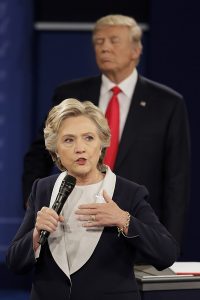 This year, an elevated level of press has surrounded the upcoming US general elections on 8 November, primarily because of the erratic and often offensive statements made by businessman and Republican nominee Donald Trump.

This past week, a tape from 2005 surfaced revealing Trump speaking vulgarly about women, and it has now even begun to alienate his own party support. For Democratic nominee Hilary Clinton, the revelations over her private email server while she was still Secretary of State, and the allegations that certain countries received high-level access to her by making donations to the Clinton Foundation, have also added to the media hype.

This year’s elections have come down to the wire, with polls showing both candidates neck and neck, making ‘swing states’, which historically have switched between voting Democrat and Republican, crucially important. This year, Florida, Ohio, Pennsylvania and North Carolina are crucial swing states, both because of their high number of electoral votes and undecided populations.

The debates provide the first head-to-head comparison of the two candidates’ policies, whereas much of the electoral campaign thus far has focused on ethics and personal attacks. Hot topics for this year’s debates include: fighting terrorism, immigration reform, police violence, and economic policy (taxes, free trade agreements and employment creation).

In second presidential debate, the outcome was decidedly opposite. Trump excelled with calmly executed one-liner attacks, but pundits still questioned whether he did enough to sway needed independent voters.

Winners and losers aside, the policy implications of the presidential debate in particular are important to note. Though neither Trump nor Clinton mentioned any African countries, a few key policy implications can be extrapolated from their discussions and the positions they have taken on the campaign trail.

Free Trade Agreements: Not really keen on ‘free’ or ‘a call for modern day protectionism’

When the candidates were asked how they propose to bring manufacturing jobs back to America, the debate quickly spiralled into a clash on free trade agreements. Trump echoed his frequent condemnation of jobs leaving America for countries like China and Mexico, which he blamed on agreements such as the North American Free Trade Agreement, which Clinton voted in favour of.

Negotiations for a SACU-US free trade agreement under a Trump presidency, which must start soon given that the African Growth and Opportunity Act (AGOA) is set to expire in 2025, will be even more difficult than usual, if they even start at all.

This is significant, as trade with the US was USD$12.7 billion in 2015. AGOA has created approximately 60,000 jobs for South Africans in labour-intensive industries such as agriculture and automotives. Failing to negotiate a new trade agreement post-AGOA will almost certainly reduce South Africa’s exports to the US, which totalled USD$896 million in 2016 (YTD June). Additionally, for fellow SACU member Lesotho, AGOA has provided a sizeable boost to the garment and textile industry, providing exports worth USD$300 million in 2015. This number is significant for such a small country, and approximately 3% of the labour force is engaged in the manufacture of textiles and garments exported to the US under AGOA.

Clinton, despite also stressing the need to keep and create manufacturing jobs, reiterated her position of much more openness to free trade agreements during the debate. She stated she is generally supportive of such agreements if they do not negatively impact employment, income or national security, and commended their ability to increase exports. It is unlikely that a free trade agreement with SACU will significantly impact these three factors, as the region only constitutes a minimal percentage of US trade. In 2013, SACU exports to the US totalled USD$9.4 billion, or 0.34% of total US goods imports. Thus the prospects for a favourable agreement would be much more likely under a Clinton presidency.

Foreign Aid: a tool of diplomacy or unnecessary burden?

Trump’s espoused isolationism also begs the question as to whether America’s profile of aid to the African continent will change if he becomes President. Trump stated during the debate: ‘we cannot be the policeman of the world, we cannot protect countries all over the world, where they’re not paying us what we need.’ He was referring specifically to his disenchantment with NATO (the North Atlantic Treaty Organization), and other NATO members’ inadequate defence budgets, which should be 2% of GDP.

Would this nationalist sentiment extend to shrinking American bilateral aid to the African continent as well? The US contributed USD$31.08 billion in Official Development Assistance (ODA) in 2015, almost double that of the UK, the second largest contributor. US aid to Africa is currently projected to be USD$7.1 billion for fiscal year 2017. And such actions would not only impact bilateral aid, but the capacity of prominent multilateral donors such as the World Bank and United Nations, to which the US is a large contributor.

However, these are of course only speculations, and given that ODA is only 0.17% of US gross national income, reducing aid may not be priority for Trump. At the same time, many of Trump’s statements throughout the campaign seem to shooting from the hip rather than based on logic. One can only speculate as to how far Trump’s isolationist sentiments could extend in actual practice.

If Clinton becomes president, one can be more confident that aid flows will remain relatively stable. Contrary to Trump, Clinton has constantly reaffirmed the importance of American allies and NATO, in line with the importance she places on the US’s partnerships with the rest of the world. Historically, US aid has always played a role in the country’s foreign policy engagement, and as Secretary of State in 2010, Clinton launched the Quadrennial Diplomacy and Development Review (QDDR), a blueprint to improve US aid and diplomacy.

Given Clinton’s experience as Secretary of State and the precarious global security context, however, a Clinton presidency would more likely see aid linked closely to American security concerns. Yet perhaps also issues such as women’s rights, which Clinton has championed vehemently domestically as first lady and Secretary of State, could have an increased presence in the American aid profile.