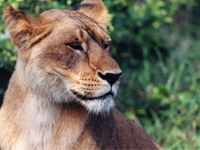 Animal lovers around the world were shocked at the announcement from CITES CoP17 (Convention on International Trade in Endangered Species 17th Conference of the Parties) in Johannesburg, that the African lion will not be uplisted to Appendix I status, denying the big cats the highest level of wildlife protection available. The news came despite a campaign from Animal Defenders International (ADI), with support from the public, governments, and Hollywood superstar Ricky Gervais.

The 183 nation signatories to CITES decide which species to afford further protection in international trade. Species covered by CITES are listed by Appendices I (highest level of protection), II, and III, according to the level of risk trade places upon survival of the species.

Nine African nations (Niger, Chad, Côte d’Ivoire, Gabon, Guinea, Mali, Mauritania, Nigeria, and Togo) proposed Appendix I protections for African lions against an increasing lion bone trade market. Despite their devastating decline, a compromise hammered together to appease fierce opposition from lion bone/body part traders, canned hunting, and trophy hunting, was adopted which leaves lions under Appendix II listing; provides a zero export quota for commercial trade in lion “bones, bone pieces, products, claws, skeletons, skulls and teeth” (but notably, not including lion skins) taken from the wild (not captive bred lions); permits South Africa to trade in these lion bones/parts from captive breeding facilities, and to set its own annual quotas; and opens the markets to other countries to enter the lion bone/parts markets supplied by captive bred facilities, with no quota requirement.

Animal Defenders International President Jan Creamer says: “We are very disappointed in this result and it runs the risk of actually encouraging opening markets in lion bone trade. Countries not currently trading in lion bones will now want to join the trade. To allow this beautiful animal to disappear from the wild would be a tragedy for us all, so we must not give up. Please help ADI to work to change this at the next CITES conference.”

ADI supported the proposal to uplist African lion populations to CITES Appendix I, to afford them necessary protections. Members of the public made their voices heard by spreading awareness about the danger to lions and other animals through social media, and joined ADI’s CITES Thunderclap to bring attention to the cause.

Animal lover Ricky Gervais also weighed in: “The survival of the African lion hangs in the balance. We must stop blood-thirsty hunters from decimating our wildlife for a barbaric adrenaline rush or trophy piece to show off to their mates. To help save this incredible species please take action today.”

Earlier this year, ADI rescued over 100 animals from circuses and the illegal wildlife trade in Peru and Colombia, including lions, bears, tigers, monkeys, and others. ADI and the governments of Peru and Columbia collaborated for the unprecedented Spirit of Freedom operation. Rescued animals were rehabilitated and rehomed to natural habitats, with 33 African lions returned to start a new life at Emoya Big Cat Sanctuary in their native Africa, where ADI is funding their care and the construction of their enclosures.
Animal Defenders International (ADI) is active worldwide to end the suffering of captive animals in commercial use: animals used in entertainment – film, television, advertising, circuses and sport or leisure such as hunting or for products such as fur. Replacement of animals in scientific research; funding and promotion of non-animal advanced methods. ADI investigates, produces evidence and reports on the scientific, legal and economic issues for each case study, recommending solutions. Information is distributed to the media, public and officials. Where ADI’s evidence has been a catalyst for change, we collaborate with governments to conduct large scale seizures or rescues of wild animals in captivity and relocate them to forever homes – back to their natural habitat wherever possible