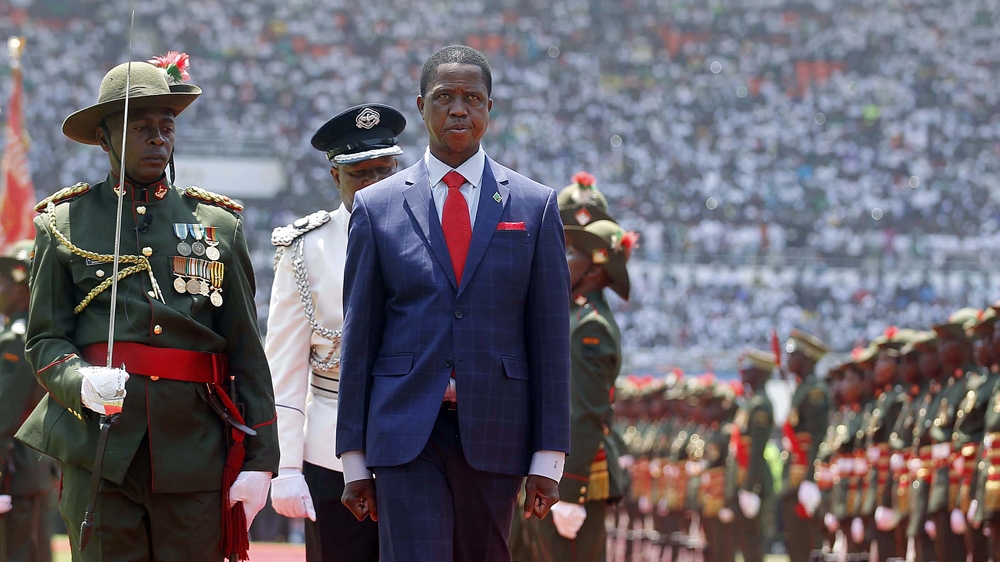 Zambian President Edgar Lungu has been sworn into office after the country’s top court rejected a petition by the opposition to block his inauguration as “illegal and unconstitutional”.

Lungu, re-elected last month in a closely contested vote, called for national unity in his speech on Tuesday at the event held at a stadium in the capital, Lusaka, and attended by regional leaders.

“Now that the elections are over, we must say as a people that we stand as united as ever,” Lungu told tens of thousands of spectators, vowing to prioritise reviving the country’s stumbling economy.

“There is no time and latitude to settle scores. We have work to do,” he said. “It is our duty that as citizens of this country we are on this journey together and be peaceful.”

Al Jazeera’s Tania Page, reporting from Lusaka, said the National Heroes stadium was packed with people and police had to use tear gas outside the venue to control members of the crowd pushing each other to get inside.

“But overall the situation has been very calm and there’s a very happy and excited crowd here, along with half a dozen heads of state and government leaders from across the continent,” she said.

Lungu, 59, won the August 11 election by about 100,000 votes, but his opponent, Hakainde Hichilema, went to court alleging that the result was riddled with irregularities.

After the supreme court rejected his petition on Monday, Hichilema, a wealthy businessman who has run five times for president, accused Lungu, the election commission and judges of all being guilty of fraud.

“This inauguration is illegal and unconstitutional,” Hichilema said in a statement sent to the AFP news agency.

“There has been no [court] ruling that President Lungu has been validly elected. We are drifting to the law of the jungle. The truth is that our election was stolen.”

Hichilema stopped short of calling for street protests but urged Zambians to “fight for your rights.

“You can’t have free, fair and transparent elections in this country under this leadership,” he said.

Lungu first took office last year after beating Hichilema in a snap election. He has since faced a number of challenges, including falling prices for copper – the country’s key export – soaring unemployment and inflation rising to more than 20 percent.

WHO IS THE REAL KAGAME?