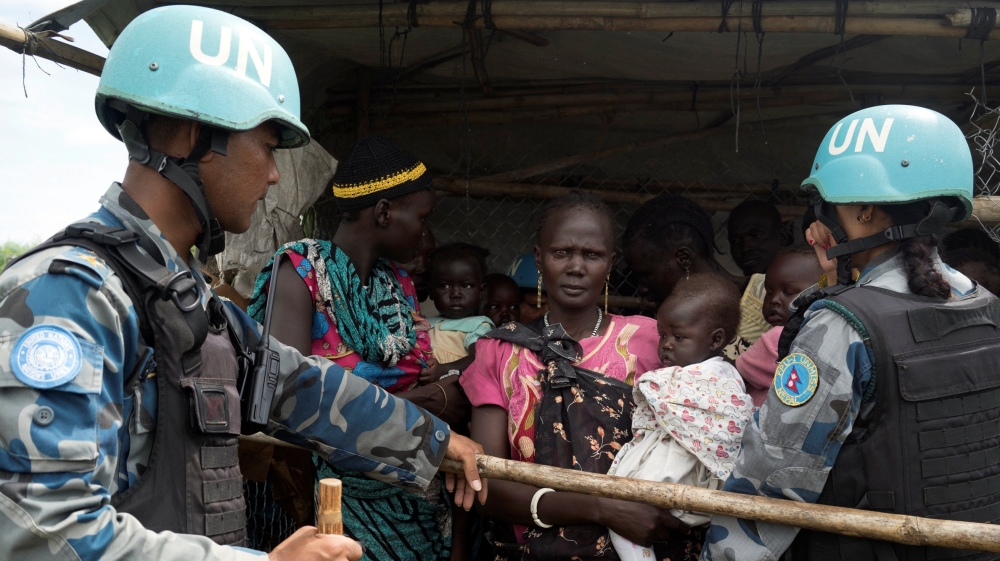 The past three weeks have seen steady criticism of the UN Mission in South Sudan (UNMISS) for its inability to protect civilians during and after the July fighting in Juba. Much of that criticism is justified, and a recently appointed UN Special Investigation should lead to accountability for those who underperformed. But UN leadership in New York, including the Security Council, has failed those same peacekeepers through inadequate emergency care and a meek response to government obstruction.

It’s time for the Council, just back from South Sudan, to put peacekeepers in the best position to succeed – including by imposing an arms embargo.

Bullets, tank shells, and rocket-propelled grenades (RPGs) landed near and inside the UN base in yet another flagrant violation of the UN’s sanctity and the laws of war.

According to our interviews with witnesses and UNMISS officials, as well as an internal UNMISS timeline, an RPG struck a UN armoured vehicle inside POC1, which houses about 8,600 IDPs, around 6:30 pm on July 10. Six Chinese peacekeepers were seriously injured.

The wounded peacekeepers were quickly transported to the basic clinic at UN House, where there was no blood for a transfusion and no surgical team. Around 7:30pm, China requested a UN medical evacuation to get the casualties to a hospital at the UN base in Juba’s Tongping neighbourhood, only 10 miles away.

Fifteen hours later, the wounded Chinese peacekeepers were still stuck at UN House. Two died during that period, one of them after bleeding for 16 hours. His death, many UNMISS officials told me, was most likely preventable. It took another seven hours, and China negotiating bilaterally with the government, to move the remaining casualties.

A military officer at UNMISS told me that in return for their commitment to put their life on the line, soldiers have two basic expectations. First, that if they follow their rules of engagement, they will have the support of their military and civilian command. And second, if wounded, every effort will be made to get them immediate medical care.

Failure to uphold these expectations is devastating for soldiers’ morale. A Western official in South Sudan told me his country’s military officers are even encouraged to disobey orders if medevac capacities are not in place, and have done so in places such as Afghanistan.

In the weeks since the July violence, UNMISS struggled to send out armoured or foot patrols. During this period, South Sudanese women venturing outside the camp, desperate to find food for their families, were raped on a large scale by SPLA soldiers.

Several UNMISS military officials linked the reluctance, in part, to troops’ concerns about the lack of medevac capacity if they ended up in a confrontation with the SPLA.

To be sure, concerns over medical care and evacuation are not solely, or even primarily, responsible for peacekeepers’ inability or unwillingness to protect civilians.

There were serious inadequacies with UNMISS’s response in July irrespective of the medevac problem. Likewise, there were major peacekeeping failures during an attack in February on IDPs housed in a UN base in Malakal.

Still, improved trauma care and medevac capabilities would send peacekeepers a strong and needed message of support. While in Juba, we were told that, after what happened in July, there were efforts to recruit a medical team and establish a hospital at UN House. That should be an immediate priority for the UN leadership in New York.

The Chinese peacekeepers’ likely preventable death is also another consequence of the government of South Sudan’s relentlessly blocking UNMISS’s movement.

The UN was negotiating to move the casualties to Tongping, yet did not receive the necessary assurances. Even the Chinese Battalion’s Quick Reaction Force would not transport the wounded soldiers through Juba, so great was the perceived risk that the SPLA would target a UN vehicle.

The fighting forces’ obstruction of UNMISS has been an almost daily occurrence over the past three years, undermining the mission’s response as civilians have been targeted for killings and sexual violence; and humanitarians have been blocked repeatedly and subjected to violence.

The recent Security Council resolution on South Sudan links a long overdue arms embargo to continued obstruction, either of UNMISS or the deployment of 4,000 additional peacekeepers.

There is no question that the government continues to impede the mission’s movement, and it has sent mixed signals, at best, on accepting the additional peacekeepers. To better position UNMISS to protect civilians under threat, the Security Council needs to stop simply uttering condemnations and take decisive action by imposing the arms embargo.

Matt Wells is the senior adviser on peacekeeping for Center for Civilians in Conflict (CIVIC).

The post The UN has failed its peacekeepers in S Sudan appeared first on African Media Agency.