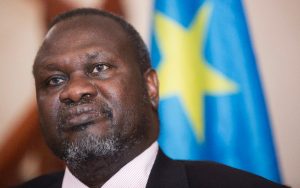 Nairobi (AFP) – South Sudan’s rebel leader issued a call for renewed war with the government this weekend, declaring the collapse of an internationally-backed peace deal.

Former vice president Riek Machar is in exile in Khartoum where he fled following fighting in the South Sudanese capital Juba in July.

In a statement received by AFP on Sunday, Machar said he intended to “wage a popular armed resistance against the authoritarian and fascist regime of President Salva Kiir in order to bring peace, freedom, democracy and the rule of law in the country.”

Machar’s leadership of a faction of rebels, known as the SPLA/IO, is in question with former ally Taban Deng Gai having taken his position in government and international backers of the peace plan urging that efforts to end the war should move ahead, with or without Machar.

It is unclear whether armed rebel forces and allied militias on the ground in South Sudan follow Machar or Deng.

The conflict, characterised by attacks on civilians, ethnic massacres and appalling human rights abuses, has killed tens of thousands of people and forced millions from their homes.

Machar said the international community should “declare the regime in Juba as a rogue government and a spoiler of peace that is threatening regional and international peace and security.”

He also called for “resuscitation of the peace agreement”, for Deng’s dismissal, and for the immediate deployment of a proposed 4,000-strong UN protection force.

The statement is Machar’s first public declaration since he fled Juba after fierce fighting with Kiir’s army. He termed that outbreak of violence an “assassination attempt”.